Rebecca St James: The wait is over, marriage and album release change things 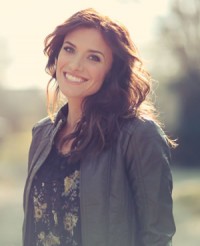 William and Kate may have the highest profile wedding but for legions of American Christian music enthusiasts and book readers it was another wedding - this one held on 23rd April at Junipero Sierra Museum in California - which had even more significance. The marriage of Australian born singer, author and actress Rebecca St James to musician Jacob Fink resonated with so many US Christians, of course, because of Rebecca's long held and much publicised stand for sexual purity before marriage. Her book Wait For Me has gone through 11 printings since its initial publication in 2002 and her song of that name from her 'Transform' album remains one of her most popular. Recently, Rebecca was interviewed by Christianity Today who asked her whether the sexual purity role will change now that she's a married woman. The singer responded, "I'll obviously still sing 'Wait For Me' because it's one of my more known songs. But now I'll be able to tell the end of the story; getting married is the fulfilment of that purity message. And for that message to have its true power, this wedding had to happen in God's timing, not mine. A friend spoke that into my life years ago: 'You will get married, because it's the ending to that story and the beginning of a new one.' So I feel the incredible significance of this season in my life. On a ministry level, there's just so much more power for the Holy Spirit to move through that message because of our marriage. We've talked about this in our premarital counselling."

Rebecca is now 33. In her long years of waiting for a husband did she ever doubt the message of resisting sexual activity until marriage? "It's not that I doubted the message. It's more that I just struggled with loneliness and even feeling a bit embarrassed, you know, being in my 30s and not married. I think our culture caters to people who are married. It's just much more socially accepted to be married in your 30s."

Especially in evangelical circles and in the Church? "Yes, exactly. Now, I've honestly found it easier living in LA because there are so many career people, especially women, in their thirties - single women who are focusing on careers. I think it's harder in the South and in middle America to be single. I didn't feel as much pressure in LA and I think that was God providing for me in a way. I have a lot of single friends, and it's not like they've all gotten married and I'm not. I thank God for that! But I have struggled with loneliness. I've questioned, 'God, do you have somebody for me? Have I written the song about nobody - in my case, anyway? Maybe it was just a song for other people to sing?' I've wondered, Is it even God's plan? Deep down I believed he did have someone for me, but in my weak moments I questioned that. A few years ago I felt like God called me to take my hands off that dream to get married and to entrust that dream entirely to God to the point of saying, 'If it's your will for me to be single, then I trust that you have a very good reason.' That was a grieving time. That was hard and I had to come back to that place quite often - to find the balance between still hoping that there is somebody, to where you kind of die emotionally, going, 'Woe is me'. That's where the balance comes in, and it's very challenging."

Rebecca was asked whether there times when she shook her fist at God? "There have definitely been times where I have been angry with God and disappointed with him in that area, and in other areas too, with life not panning out how you think it will. In your late teens and early 20s, you're so idealistic, thinking, If I do things in the right way and if I pursue God, life is going to be easy. And it's not, you know? Life is life. Bumping up against real life and realising that it's not perfect and idealistic was challenging for me. But God has also taught me to hope in him despite my circumstances." 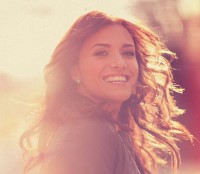 In 2008 Rebecca's career expanded to take in acting. She starred in the pro-life drama Sarah's Choice released on DVD and then appeared in several other low budget movies. She was asked whether acting was just a phase. "I never intended to give up music and turn solely to acting, but I'm happy with how everything turned out while I pursued it. Now, music is the focus, but I'm still looking at other acting opportunities; we've got two on the table right now for other films. I've been involved in five or six films since I've been in LA, and it's been an awesome journey. And if the right opportunities come along, I would love to continue acting, because I love the art form."

But it's been Rebecca's long delayed return to the CD racks which has caused the most comment. It's been a phenomenal five and a half years since the singer's 'If I Had One Chance To Tell You Something' was released. So why now? "It just felt right," she responded. "I've had some time to be away from the art form of music enough to appreciate it in a fresh, new light. They say change is as good as a holiday, and I think the change of focusing on films and books predominantly for a while really refreshed me for music."

So how does 'I Will Praise You' differ from her previous albums? She told titletrakk.com, "It was different because number one, it's a worship album. I write about 75 per cent of my studio albums myself. But I went into this project going, you know, I'm very willing to take other people's songs that capture my heart and record those. As I started writing for the album and different subjects and themes were coming up I felt were what God was calling me to write about, the songs were flowing, and there was inspiration. I was actually surprised at the end of the day that I was co-writing five out of the 10 songs. But I didn't go into this album feeling any pressure that I had to write the whole thing. I was like, God you have your way and provide the songs that need to be on here. It's quite a peaceful, easy process. The difference musically . . . generally with an album my producer and I will go in and we'll programme every song and then go into the studio and bring other musicians in to be the band around that programme track. It was the opposite on this album. We recorded with a blank slate with the band, and then put programming in on the back end, so I think it actually creates a different sound for me.

"I think there's a real theme of redemption throughout the whole project. From the last song on the album 'You Make Everything Beautiful' which really talks about God redeeming our pain and him making everything beautiful in his time, to 'I Will Praise You' that shares no matter what comes in life, let praise be the outcome of my life. Let there be redemption in that praise and that clinging to you. 'You Still Amaze Me' is all about God just being faithful, and the character of God, and his redemption of us at the cross. So there's this lovely theme of redemption, and it's a big theme in my life too."

Rebecca's favourite song on the album is "You Make Everything Beautiful". She commented, "Not only is that song about God redeeming our pain and all things working together for good of those who love him, but it's also about self-image and beauty and that whole topic. I think it's a very important issue to be talking about in Christian circles today because I think we can buy into a very worldly mindset that outer appearance is all that matters. That cripples inner beauty. The song is very powerfully relevant on both fronts, and when I've been doing it live it's been an absolute moment in the show. Very, very powerful."