Still just 17 years old, KRYSTAL MEYERS is breaking the mould of what a teenage CCM artist looks and sounds like. Tony Cummings spoke to her. 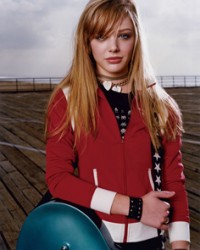 Christian record labels have signed 16 year old singers before now. Back in the '70s they did it with Amy Grant and more recently Rachael Lampa. But when California-born Krystal Meyers signed on the dotted line with Provident Label Group's Essential Records the industry knew that here was someone very different from past signings. Krystal was no purveyor of polite Nashville pop but a full on rock chick who said her musical influences were Finch, Dashboard Confessional and Blindside. Essential Records' bold step proved to be an inspired one. The singer/guitarist's 'Krystal Meyers' album has become a major Christian music hit with one song on it, "Anticonformity" becoming a militant anthem for teenagers struggling to make sense of the all encompassing peer pressure of youth culture. Krystal spoke about her "Anticonformity" breakthrough composition: "The song is say let God influence your decisions and set you apart because he's got a plan for your life that's different from anybody else's. I'm not telling people just to rebel against what everyone else is doing. There really is Godly rebellion and that's what I want to get across!"

The song was to lead to a recording contract. Explained Krystal, "It really got started back a couple of years ago when I was going into ninth grade and my church went to a Christian summer camp. So I went with them and another girl and I wrote 'Anticonformity'. What happened was that at the end of the week we were asked whatever we had been doing in our spare time we had to perform at the talent show. We thought, 'Cool! We wrote a song, we can play this song for the talent show.' So we did that and a month later I got a call from somebody who had apparently been a counsellor or working in a class at the camp and he was like, 'We are making a benefits CD, it's going to include Skillet and Pillar and bands like that. We would love for you to record your song 'Anticonformity'.' I said, 'Sure!' It was my first time in the studio; the guys from Jars Of Clay, Audio Adrenaline and Caedmon's Call all recorded on that song with me! It was crazy. We started talking to different labels and struck up a buzz. About a year and a half ago I did a showcase that all the Christian labels came to and Essential Records got really interested. So we started talking with them all summer. I signed with them last September and then two days later I flew out to Hollywood to record. So it's been a crazy experience!"

For the 'Krystal Meyers' debut the singer worked with renowned CCM artist and producer Ian Eskelin and the highly acclaimed LA-based Wizardz Of Oz production team whose credits include Avril Lavigne and Liz Phair. The theme of resisting teenage peer pressure permeated Krystal's album. She said, "The album's 'anticonformity' themes tackle appearance and overall social status, but it also touches on everything from your relationship with God to your relationships with a guy or your parents. I tend to write in a way that has a double meaning, so you can take it in a different direction if that's how the song speaks to you."

Since the release of her album Krystal has been touring steadily. She commented, "I wasn't really sure I had musical role models until I started going on tour with Day Of Fire and Seventh Day Slumber. Both bands, all the guys are complete role models because I just get to see how they interact with the crowd and with their fans after the shows; you know, dealing with their testimonies and stuff. It's cool just to see how many kids they lead to Christ each night and the way they connect with everybody."

Clearly Krystal's becoming a role model too. "Every time we do shows there are floods of kids that come up and just want to talk to you and say, 'I love the fact that you stand for anticonformity and like I can totally relate!' It's kinda like a light in the darkness. We played a show in Chicago and this girl came up to me afterwards. I had seen that she was singing the lyrics to the songs and I thought that was really encouraging. She came up and was like, 'I just want to tell you I can totally relate to your story because I am 16 years old as well. I am a junior in high school and my friends are all into the party scene, the drug scene, all that kinda stuff. I am the only Christian out of all of them, so I have been finding it really hard to stand up against their pressure but once I found you and your single (my record hadn't come out yet) I have been looking you up on the internet left and right and you've become quite an encouragement. And a total role model 'cause when the going gets tough I just remember 'Anticonformity' and how I need to turn to God. I have actually been able to turn the negative into a positive.' So it's cool!"

Looking back, the California-born singer moved to Tennessee by age six, started writing songs by age 10 and was playing the acoustic guitar by 13. Throughout these years Krystal regularly attended songwriting-focused summer camps and even formed a band in junior high. By the time she started high school, Krystal's songs started to mirror the social pressures she saw around her on campus.

From a young age Krystal's musical tastes were always geared towards edgy rock rather than teen pop. "For some reason, I can't pinpoint how it was but I think I always loved the heavy electric guitar and the crazy drums and the flying bass lines and all that kinda stuff. I have always loved harder music. My dad has always liked harder music. He played drums in a heavy metal band when he was at high school up to his mid 20s, so I've kinda just grown up with that around. I don't know, it's always been something I have gravitated towards. I still have respect for those pop artists and stuff you know; we do have our guilty pleasures! I like to listen to it when nobody else is around! But also I like to drive around in my car with the windows down, blaring some sort of heavy rock music, whether it be Blindside, the new Underoath or anything like that. I just love rock music.

"I wanted to break the mould of the whole 'sex, drugs and rock and roll' thing. Also, I wanted to be able to be on stage and instead of wearing a nice sparkly, low cut gown I wanted to be up their swinging my head around, my hair going everywhere, be jumping all around stage and have high energy. Not just be a clean cut, prissy drama queen!"

This high energy rock chick, despite her slight build, is even prepared to enter the physical buffeting of a mosh. "The last show that I went to was an Underoath charity show and of course they are hardcore and so are their fans. Me and my best friend were up front. You have the occasional people moshing and the occasional crowd surfers but once Underoath came on it was all let loose and I got kicked in the head so many times! There were people standing around with cuts on their faces 'cause they had been punched and I just thought 'Oh my goodness!' I'm not hardcore but it's funny because there will be a circle that forms in the crowd and there will be kids that just go out in the circle and start dancing and flinging their arms around. I love watching it because it is such a crack up!"

I love Krystal Meyers! her style and her music are very cool! her music is very blessing too!

wow krystal rocks ive got like all her songs shes deffently a role model, all i can say is that shes about the only teen chick repping jesus wow, rock on chick
if anyones heard THE SITUATION you get what i mean thats like so dope.