Rick Elias: The Nashville-based singer/songwriter providing the soundtrack for a Hollywood film

After years of dues paying RICK ELIAS is providing the music for a Tom Hanks movie. Sammy Horner reports from Nashville. 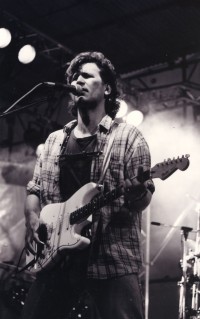 As I drive down through the beautiful countryside of south Kentucky, my mind drifts back to all the poor dudes back in the CR office in England. Poor souls: slogging away while I get the plum CR interviews. It's a rotten job y'know, but someone's gotta do it. Before a stream of letters arrive on Cummings' door step demanding a reduction in the price of the magazine, let me point out that CR's budget does not stretch to sending hacks across the pond. This is the usual CR investigation... I just happen to be here anyway and I have a tape recorder! Hard Rock Cafe Nashville seemed the perfect place to meet up with an old pal of CR - the excellent Rick Elias, for, we are told, he hath some mighty fine news for us. I arrive an hour early (well, how was I meant to know that Kentucky and Nashville are in different time zones... I mean, Glasgow and Edinburgh aren't!), but soon Mr Elias turns up looking every inch a rock star, without the attitude. Can it be true? Has he really managed to get the title track on the forthcoming Tom Hank's movie soundtrack?

"Yeah! It's incredible, they also asked us for some more songs and took another three of 'em!" smiled Rick. The story was, in Rick's words, "incredible" and it began back in LA, 1984.

"I was in a band with a guy called Scott Rogess back in '84," began Rick. "We played a showcase gig with a band that only lasted a little while, but a guy called Gary Goetzman who was working with bands like Talking Heads caught our act and dug it. After the band broke up, I lost contact with Scott and I became a Christian. In '95 I found myself on tour with Margaret Becker in Florida and Scott turned up at the gig. We decided to team up again and form a band, and within a few gigs we got offered a deal by a major label. It's weird how God works! Anyway, just as we were coming down from this incredible blessing, Scott got a call from Gary Goetzman who has become one of the biggest producers in Hollywood (Silence Of The Lambs, Philadelphia). The new movie he is producing is about a rock 'n' roll band called The Wanderers who have a hit record, travel the country and then break up. The movie is called That Thing You Do. Hanks wrote it and will star in it and direct it. They needed a title track and asked us to send a demo, so we wrote the song in about a half hour, demoed it up and sent it off. We didn't really expect anything, but they liked it and asked for more, and took four songs in total.

"Not only did they want the songs, but they liked what we'd played and so they flew us to LA where we played on the soundtrack and, wait for it, even got a bit part in the movie. Don't blink though!"

So does this mean fame and fortune for you? "Well, it means four songs on the soundtrack album and in the movie/video so it depends how well the movie does really," said Rick. "The best thing has been to trace how God links you in with people throughout your life and you just never know how those people might touch your situation in years to come... It's been an amazing blessing."

So any plans for the UK now that you're a Hollywood star? "Yeah, I'll be playing with the Ragamuffin Band for Rich Mullins. We're going to Ireland's Summer Madness Festival and doing a few Irish gigs... Hey, we'll even come to Scotland if you can fix it!"

So Rick Elias hits Hollywood and impresses the boots off Tom Hanks and movie moguls alike, but it is more than just the music. Not a hint of inflated ego comes from the man who is just as happy playing as a session man for a few bucks, helping buddies like Rich Mullins and Julie Miller, or even offering to drive an 11 hour round trip to help out a volunteer CR journalist who can't figure out how to get back to the airport in Kentucky. It's good to see that sometimes it's not only the wicked that prosper!