Rick Elias: With his bluesy compatriots The Confessions, the singer/songwriter is getting noticed 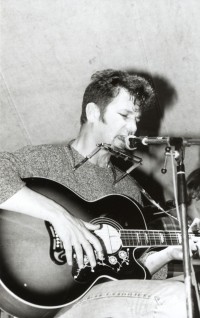 Even though historians scoff at packaging events into ten-year bundles the way we do, there is still something invigorating about entering a new decade. Optimists of the world, and those of us who thrive on a sacred hope, view it as a fresh start, as good a time as any to wipe the slate clean and start to do this thing right.

Serious music fans could feel the ground swell in the 80s, and now rising up en masse to take on the 90s by storm comes a new vanguard of Christian rockers who have the audacity to be real. They bleed and heal, they hurt and rejoice, they feel both doubt and peace, and experience fear and then victory a la David in the Psalms - in short, they act like most people do. One man with a future in this blossoming honesty movement is Rick Elias, who, with his band, has just released his debut album, Rick Elias and the Confessions.

Happily, Elias is one of those rock poets you hear about who is good enough to have the option to forsake secular success to address the Body of Christ with his various observations. His musical energy reminds one of the other members of the "Been There and Back" club, notably Undercover and the Altar Boys. It seems a natural, then, that he will be producing Altar guy Mike Stand's next solo album due in a few months.

In common with these artists who seem to have walked their 40 years in the desert, Rick Elias aims at the heart of the young outcast adrift on a cruel sea tossed about by violence, addiction, depression and disease. On occasion, a song will frankly describe a dark state of despair, but Elias is sensitive to that song's power. "I wouldn't use it in a church service...but it has ministered to people who have been there," he says. Then, in whiff of sarcasm, "and some of them are Christians!"

Rocking guitars dominate the Mellencampish sound, accented with generous amount of mandolin and harmonica, and his voice has an interesting "mid-range raspiness" that conjures up images of Karl Wallinger first thing in the morning.

Early on, Elias met rejection, being the product of a broken home and therefore in the minority at a prominent southern California Christian college.

"Disenfranchised would be another way to put it," remembers Elias of his days before being booted from Azusa Pacific. "You kind of encounter that stonewall of evangelical Christianity, and I didn't adapt very well."

In fairness, Elias concedes his introspective personality and years of teenage garage band songwriting and playing probably had destined him for counterculture status on campus anyway: "If I came from the most stable background in the world I would have been considered eccentric." When confronted with the notion that in any given community, the misfit will be with you always, he muses that they are "probably the very same people that might buy the record."

By the late 70s he was vying for rock stardom in the crazy North Hollywood club circuit that produced The Knack the Go Go's, and Guns n' Roses. One fateful night, Elias and band had the show of their lives opening for the Bus Boys in front of the music industry's top scouts. The band's newfound attention was not to last, however, as a series of bad decisions and personal mishaps brought it all down like a house of cards.

The group disbanded, his fiancÃ© left him, and an overdose and sheer despair drove Elias back to a desperate prayer for help about five years ago. "I remember praying to the Lord one night: 'I don't know if you're out there, but you've been leading me to this point, and I believe that you can get me out of this situation." From that point on I've been walking with the Lord."

Currently, Rick Elias and family make their home in San Diego, but it is not exactly a retreat from Babylon L.A. Even though Elias and his current band the Confessions have a standing invitation at at least one of those red-hot clubs frequented by Axl Rose wanna-bes, he believes that subculture to be like an unreached tribe best left to the Lord's wisdom. Elias chose instead to "step away a little further" and employ his talents on this side of the fence under the Frontline Records banner. The ministry-mindedness and smaller size of his new label suits him well, freeing him up to "take pot-shots at the obese powerbrokers who run this country."

This seems to be one of the prime motivators behind Rick Elias: he is passionate about pointing out the entrenched western systems that dehumanise people, then "grind them down and spit them out." One look around confirms that the status quo is flawed at best, and a lot of time songs are used to urge us to run away from, rather than idolize, the powers that be who would falsely teach us that there is no class structure and no problem. Perpetrators of corporate evil are equated with crack dealers as Elias painfully observes: "one generation after another is just falling by the wayside to drugs and materialism."

Rather than voice these concerns in a political arena, Elias sees the message as a vital message to the mainline Church. "I don't want to be taken as some sort of political revolutionary. 'cause I'm not. I do see my role as an artist to point these things out as I see them. These guys get nervous when anyone bucks the system. If what I'm saying is radical...and I don't think it is...it's because so much of Christianity has taken up a corporate mentality in America."

Clearly, certain harsh institutional coldness in Elias' past fuels this kind of cautionary songwriting but the feeling in the lyrics is more an artfully urgent persuasion than the sternum punch you might expect. Numerous themes usually inhabit any one of his songs, from the flaccid impotence of comfort-drugged suburbia to the irony of wearing disguises within the church walls. And if the mixed imagery blunts the point's impact a bit, Elias chalks it up to the nature of the songwriting process. "It's hard to say when you're writing a song that you never truly zero in on one absolute subject. Now there's times when that happens, but some of my favourite exercises in writing a lot of times deal with where I'm almost telling three or four stories at one time."

Maybe this poetic license is what delineates the artist from the preacher; Elias maintains that he is not a shepherd to the flock. But his desire "to reveal so much of myself that they become vulnerable" sounds familiar. Rick Elias would join the growing number of voices that together sing to remind us that the life in Christ, like the passing years, simply can't be summarized in little tiny bundles.

This article first appeared in America's Note Bored' magazine and is reproduced with permission.

The opinions expressed in this article are not necessarily those held by Cross Rhythms. Any expressed views were accurate at the time of publishing but may or may not reflect the views of the individuals concerned at a later date.
About Paul Lewis
American journalist Paul Lewis has had articles published in several different music publications.