Rick Wakeman: The prog rock veteran on music and faith

Any encyclopaedia of rock will include a lengthy entry on keyboards virtuoso RICK WAKEMAN. In recent years though his albums have begun to peep from the CD racks of Christian bookshops as well as the high street record stores. Tim Cockram spoke at length to the veteran 'prog rocker' about his life, music and Christian faith. 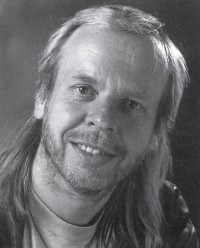 Rick Wakeman, showman, raconteur, ace keyboards man and all round nice bloke, has survived 25 years in the music business. He's so prolific that a complete discography may well rival the Doomsday Book by the turn of the century.

At age 16, Rick decided he wanted to be a concert pianist and studied at the Royal College Of Music. Coming to the notice of the pop industry while playing pub gigs Rick was soon doing recording sessions with among others Cat Stevens and David Bowie ('Hunky Dory').

Rick joined the Strawbs in 1970 and saw critical acclaim but left after 15 months to replace Tony Kayes in Yes who fronted by vocalist Jon Anderson were one of the most successful of all the progressive rock bands of the 70s. Solo albums followed. More than anyone else Rick pioneered the concept album and among his many acclaimed solo albums were 'Six Wives Of Henry VIII' (1973), 'Journey To The Centre Of The Earth' (1974) and 'Myths And Legends Of King Arthur'(1975) all for A&M.
Today, Rick Wakeman lives on the Isle of Man with his wife Nina, children and several sets of golf clubs. His latest project is for lovers of Christian music his most significant ever, forming a new Christian record company Hope Records. I spoke to Rick at his home on a cold winter morning. In between sips of tea Rick spoke at length about his faith, divorces, the CCM industry and much more.

How did you become a Christian?

"I'd like to be able to tell you that it was some blinding flash of light, etc. But it was not like that. I was brought up in a Christian family. When I was five I was sent to South Harrow Baptist Church because my father's church was too far away. I hasten to add I never had anything forced on me. I loved it and spent many enjoyable years there. It became a second home to me and I became sort of a church member and was baptised in September 1968. Prior to that I did a two-year course on Sunday School teaching. I was also heavily involved with the Boys Brigade. In a nutshell I suppose that was the whole basis of the building of my faith. I can never remember a time in my entire life when I had any doubt that God existed. I've had some bad times in my life and, there're days I've wandered off paths as most people have. But I never ever had a moment in time that I didn't believe in God, very strongly. In 1968 I'd just left school and was at the Royal College Of Music and had started doing sessions and my musical life was starting to take shape. I knew that my life was going to take me away from South Harrow. I knew that very, very strongly. I decided I wanted to make my commitment and be baptised. So I went along to our minister. It was quite funny actually because I arrived at his gate at the manse and one of my good friends arrived at the gate at exactly the same time to ask exactly the same thing that I was there for. Neither of us knew about it. It was quite nice actually because we went in together, we talked together, went through all the bits and pieces together over the next few weeks and actually got baptised together on the same day."

What motivated your decision to be baptised?

"I was very aware that apart from declaring my faith openly, I was going to be in the strange position of actually parting with that church. Rightly or wrongly, I felt that I wanted to show that I was on the right side before I went off to do whatever life was going to throw at me. And I suppose it was shortly after that that the world got busier, life got busier, and I found less and less time to do all the things that basically I declared in my life that I would do, as a Christian, and it became really difficult. There are no hard and fast rules but when you're travelling and things you have less and less time because you don't actually belong to a church... At that particular time the music industry, in fact the entertainment industry had as low a percentage of Christians as the England national team have of footballers. It was a low ebb as they say. Sometimes your strength both in life and in faith is being with other people. We were always taught that the church is people not a building. Suddenly it all changes. People's lives go off in many directions, it's what I lovingly call "the roundabout" -you and your mates all arrive at this roundabout and all your lives change, you all go off in different routes. I'm convinced that it is one of the major areas where it all goes wrong. This is the area where I feel churches should be putting in more time and thought, because that's the period of time I think when people need most help."

How did your life change when you became a professional musician?

"My musical career didn't actually take off straight away like a lot of people think it did. I did quite a few years of playing sessions, playing in pubs, clubs, anywhere I could, trying to scrape my eight pounds a week rent. If you're a musician and have any relative amount of success then your life gets taken over for you. You are not your own boss, whatever anybody might tell you and basically you're on a roller coaster ride and that roller coaster ride takes you to wherever, to whoever and whatever the people who are in charge of the driving seat are. And there are very, very few musicians who can honestly say they are in that driving seat totally in control. At best they'll be in the front passenger seat."

How do you reconcile your upbringing and belief in God with the "rock and roll" years?

"Even though I was making mistakes and doing lots of wrong things, I never ever had a moment when I didn't believe in God or the power of God or had the fear of God. I was aware of it when I was doing some things wrongly. I use a comparison sometimes of the number of times God said to Israel, 'Right, I've had enough of you but I'll give you one more chance,' because He is ever-forgiving, providing that you own up. So there comes a moment in your life whether you've had faith before or never had it, when you have to own up and look up towards the heavens and say, 'Alright God, point taken, come back on board.' Two interesting things happen from there - first of all, there aren't any blinding flashes of light, you're problems aren't solved ten seconds later. What you have got is, if you do it properly and mean it, you've got a clean bill of health; you've got a clean sheet to start with. What's gone before is forgiven, providing you have asked for that forgiveness. And then if people throw it back at you, you go, 'Okay, I can live with that,' because I know that from the moment you regale your life or you gave it for the first time you've got a clean bill of health. Basically that's what happened to me in the mid-80s."

You've been married and divorced. Why didn't your first marriage last?

"I married very young, I was 20 and I've got two wonderful sons from that marriage so good comes from everything. It was certainly a mistake for both of us, we were too young and not ready for what the musical world was about to throw at me."

How did you meet your wife Nina?

Would like to know where in the US I could get a copy of Rick's Christian CD's?

I've always been an admirer of Rick Wakeman. But now, after hearing his revival story, I'm even a bigger fan! God bless you sir, and I'm glad that you are now working for the kingdom!

First and foremost I praise God for Mr. Wakeman coming to a saving knowledge of our Lord Jesus Christ. Next I would like to ask if Mr. Wakeman ever performed a concert in SD at Horizon Christian Fellowship? I believe I saw him and his son at a concert there. If I am not mistaken his son wore his fathers glitter cape and long hair. It was amazing to see the transformation of Mr Wake man from Rock Star to man of faith in Jesus Christ. Just one question did he record a Christian Album that appeared to be all symphonic? If so is it still in circulation? And where may I obtain a copy of the album?

thanks for an excellent article. i heard that rick had returned to the faith of his youth; glad to read his testimony