Ricky Dillard & New G: A choir who've been through Hell but were not burned 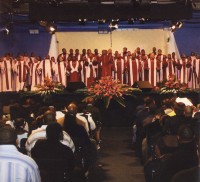 The release of 'The 7th Episode: Live In Toronto' by Ricky Dillard & New G (aka New Generation Chorale) brings back into the spotlight one of the most colourfully flamboyant figures in the whole gospel genre. As Bil Carpenter in Uncloudy Days: The Gospel Music Encyclopedia wrote, "It's quite a sight to see the slim, fastidious singer spastically conduct a choir of full-figured singers to dip, shake and grind to the time of his invisible conductor's baton. There's no choir exactly like them in gospel today." An extract of a review by Keemon Leonard of the concert at Toronto's Rhema Christian Centre where 'The 7th Episode' was recorded indicates that New G have lost none of their theatrical flamboyance. Leonard reported, "Clad in pink and burgundy robes, Ricky Dillard & New G came back for the second half with another set of soon-to-be gospel hits, with Dillard and Darrell Davis writing the bulk of the music. Starting with Dillard's 'Bless His Holy Name', the songs moved in the same vein as the choir's recent hits 'Take Me Back' and 'Holy Place'. With their choreographed moves and powerful vibrato, these cuts will be a delight to many. The Davis-penned tune 'That Name' brought the house down in an uproar."

Ricky told Christopher Heron how his career has developed down the years. "In the 16 years I've been in the industry, I've learned you can't be anyone except yourself. When I first launched New Generation with the flamboyant movement and the type of vocal arrangement we presented, I knew then I couldn't be anyone else because the industry already had Rev James Cleveland in Southern California, we already had Rev Milton Brunson & The Thompson Community Singers. Now, it was time to introduce something original, creative and attractive. . .something that people would want to invest in, whether it was the purchasing of your CD or the purchase of a ticket to your 'live' performance. These were some of the things I tried to originally instil in our early organization. Experience has also taught me to focus on ministry because it can be easy to get caught up with the accolades people shower on you. If you're not careful, we can take the glory away from our Lord. The experiences I've learned have taught me to remain based and abound in ministry to ensure that God gets all the glory."

Born on 25th February, 1964, in Chicago, Dillard was raised on the east side in the Mason Court projects by a single mother with four children and a tenacious faith in God. At the age of three, he was watching and pretending to conduct choirs. At five years old he began directing the junior choir at St Bethel Baptist Church. In 1981, he formed the first gospel choir at Bloom High School. He remembered, "There were so many church kids there and they liked to sing. So, I started a group called Ricky Dillard And Company and we sang at school. One of my teachers, Don Bondurant, said, 'You should start a gospel choir' and I did." In spite of his love for performing, Dillard thought his future lay in radio announcing. He attended Columbia College for a couple of years, but dropped it because "the curriculum bored me and I was really tired of school anyway." He took a job as a front desk clerk at a Holiday Inn and later worked as a filing clerk while performing in a professional back-up group called Love, Salvation & Devotion (LSD) on the weekends.

In 1984, Dillard joined the late Milton Brunson's Thompson Community Singers. At the same time he started hanging out with renowned club DJ Frankie Knuckles and began recording dance tracks. Aside from a half dozen guest appearances on various dance singles, Dillard recorded his own album 'Let The Music Use You' which was released in Europe on Jack Trax. In spite of his growing success in the club market, Dillard explained, "My heart was in the gospel. I always wanted to do gospel. The other stuff was just an opportunity to record. I wanted to bring a more contemporary style into gospel for choirs." It was those contemporary innovations in gospel music that necessitated Kirk Franklin and the Winans explaining their motivations to the more conservative church goers. Said Dillard, "I don't criticize because I believe all music was created to praise God and all we're doing is taking back what the Devil stole from us and using it to please God."

Dillard says God led him to found the New Generation Chorale in 1988. The next year they won the McDonald's Chicagoland Choir competition. One day he met producer Butch McGee in a parking lot. McGee had heard of him and signed Dillard and his choir on their reputation alone. 'The Promise' by Ricky Dillard And The New Generation Chorale, released by Malaco in 1990, won the ensemble a Grammy nomination and a GMWA Excellence award in 1991. And the next year they were featured in the Steve Martin movie Leap Of Faith. By the time their second live album 'A Holy Ghost Take Over' debuted in 1993, Dillard was a consultant on Whoopie Goldberg's Sister Act II movie and the choir had appeared on a PBS Television Special, Going Home To Gospel, featuring Patti LaBelle and Albertina Walker. In 1994 The New Generation Chorale won their first Stellar Award for Contemporary Choir Of The Year and recorded all the background vocals for gospel matriarch Albertina Walker's Stellar Award winning album 'He Keeps On Blessing Me'. "It was a delight to work with the Queen," Dillard laughed just thinking of the experience. "She keeps me laughing." In 1995 New G's third album 'Hallelujah' was released and the choir had its first club hit. They collaborated with Frankie Knuckles and Adeva on "Walkin'" from their 'Welcome To The Real World' album. The Virgin Records single became a Top 20 hit on Billboard magazine's club chart.

By 1996 New G had moved to Detroit-based Crystal Rose Records. Their debut 'Worked It Out' sold 30,000 pre-orders out of the box. New G had their biggest promotional push yet. In 1997, the group made their first tour of Europe where they were particularly successful in Germany. "I was surprised that we were so embraced," Dillard said. "But years before I told the choir that we were going to be international and God made that happen for us." 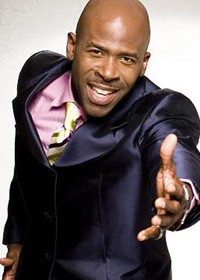 In 2000 the group were back in the gospel charts with the 'No Limit' album. The choir opened for Patti LaBelle and Bonnie Raitt among others. They also made another silver screen appearance, this time in the movie Fighting Temptations. Recalled Ricky, "At the time I was working with a Baptist church in Atlanta and Paramount Motion Pictures sent some scouts to this church to see some other people who were also going to be connected to the movie. I happened to be there. Some of their representatives remembered me from my part on Leap Of Faith. So, there was a relationship already there. It was an awesome experience to meet some outstanding people like Cuba Gooding Jr, Beyonce Knowles, LaTanya Richardson and Michael Epps. It was an awesome experience to rub elbows with these people, not only in front of the camera but behind it, as well. The experience in acting and sound track recording. . .I was involved in the Fighting Temptations sound track recording. . .was amazing."

After their occasional flirtation with R&B and hip-hop rhythms, New G's 2004 album 'Unplugged.The Way Church Used To Be' was very much a back-to-the-roots project capturing unadorned church worship recorded live in Chicago. Interviewed at the album's release Ricky said, "I can remember as a young man, coming up in church in the youth department, some Sunday mornings, pastor would ask the choir to sing and the choir would sing until the glory of the Lord would fill the room and change the atmosphere and create such an anointing in church, so much so that the pastor would be unable to minister because the glory of the Lord was so present. This reminds me of a Scripture which talks about the temple Solomon built, where they would sing and praise God. And as they would sing and praise God, the Scripture talks about a cloud of glory which filled the temple; and because of that cloud the priests were unable to minister. I wanted to capture that experience in 'Unplugged'. It's not that I wouldn't want anyone to hear the word of the Lord. I just would like to see the children of God ushered into the presence of the Lord. There's not much more you can achieve in worship once the glory of the Lord is present. It's with this in mind that I do the kind of gospel music that I do. I only want to do the kind of gospel music that gets to the heart of man and brings changes to a man's life or causes him to be better or edified."

On 23rd January 2007 Ricky underwent a major shock when his six-bedroom home was burnt down, taking with it mementoes and unreleased video and sound recordings. He told reporters at the time, "The only thing I can really rely on is the word of God that's keeping me together. I want to fall apart, but his word is keeping me together."

Now in a new stage in his life, Ricky has decided to take more control of his career. In 2006, he parted ways with Crystal Rose Records and started his own label, Animated Entertainment Inc. With backing from Alliant Music Group and EMI Gospel, this company is ready to soar. The first project from the label is 'The 7th Episode: Live in Toronto'. Said Dillard, "When I look back over the years and think of the trials and trying times this choir has been through, I have to recognise God's favour to us. We've been through Hell, but we were not burned. We're still here and God showed us that when we were ready to give up that there is no limit to what we can do as a group. When we thought we couldn't take it, God said we could."

I love. Mr. Dillard. Style. His praise.the choir that i sing with. Sing. Many of his songs .i also purchased them for my grandson and me iam a senior citizen loves and collects all gospel music in different styles. This group is A dynamic choir

I love Ricky Dillard and the New Generation!

I would love to know who made Ricky Dillard's choir robes (Pink & Burgandy) They are fabulous!!!

The robes look like they were made from the House of Joshua (Mrs. Anita Joshua) I am not sure.

If someone can tell me who made them It would greatly be appreciated.

This is the best choir i ever herd in my life my sister used to sung with yall RITA BOSTIC and she told allthe good times she had one day i wish to sing with yall.
ALWAYS
Michael Bostic