RIVER count the Manic Street Preachers and Skunk Anansie amongst their music influences and went down a storm at last year's CR festival. With their manager they took time off on a Friday evening to talk to Phil Crawley. 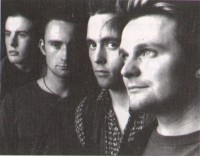 The first word went to their manager, Paul Phillips. "We're all part time at the moment, but we're hoping to get into a full time thing with the music. We're all from the same church, Ely Christian Fellowship (Cambridgeshire), which we invest in, doing worship at a satellite service, although not explicitly as River. The band really has a dual purpose. We outreach, but not only at Christian venues. The Powerhouse in London and The Dublin Castle are secular venues we've played, along with YMCAs and lots of local 'up and coming' places! In a sense it's not a band just for Christians - we play in the world."

River formed as a band in 1995, but only since Cross Rhythms have they been in their present form. Although they don't yet have a record deal they have received a prophecy saying that by the end of 1997 they will have a CD out.
Said Ali Loaker (lead vocals, guitar), "We're looking forward to Cross Rhythms again this year. The music is all about passion, having some life to it. We want to spread the Gospel, but not in some naff, trite way. We hope people are challenged when they come to see us."

The band has been pretty busy the past year. "In the summer we hosted an event called RAW for the kids in Ely where we wanted to bring music and a load of other things together," explained Paul. "Seven were there and played, it was great. Although it's on hold at the moment while we negotiate a new venue, we're hoping to get Flow and Sister Sister down next time. Keep an eye on Sister Sister - they played Greenbelt last year and they're getting some good press."

So how do the band get their material together, I asked Ali. "I tend to work out lyrics and maybe some chords and in rehearsal along with Colin (Tubb, bass) and Lindsey (Blickem, lead guitar) we just flesh it out. Lyrically, the band I think we're seeing eye to eye with is Johnny Q Public - in the way that they are challenging people and not mincing their words. Anyway, half of the songs we sing are preaching to ourselves."

Drummer Ben Loaker (Ali's brother) chirped in. "We're not a band that just stands there - expect energy and eyeliner!" Gerald Coates prophesied over Ali when he was younger that he'd play gospel music all over the world. I bet he never reckoned on the eyeliner...

At the moment River are looking for a new rhythm guitarist to free up Ali in his singing. Paul stressed that they wanted someone who, as well as being able to play, should be a Christian with vision. Ben and Ali both want a "wild person". They are also looking at maybe having to change their name as apparently some upstarts from the States got there first and they've just learnt about a popular Irish River as well. But whatever their name, you're going to be hearing more from these guys.

For more on River visit the River artist profile