Riverdeep: Britain's pop rockers who keep it in the family 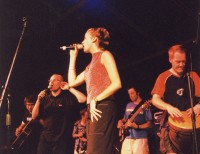 Tony: What does it feel like after all those years of dues paying to have your debut album on sale all over Britain?

GREEEEEAAAAAAAAAT, privileged, blessed. But we are only just climbing the bottom rungs of the ladder, there are a lot more to come.

Tony: Tell me a bit about the recording sessions.

The studio was called Force Nine Studios, a little place based in Walsall Wood. We laid the drums and bass first. Then we went about laying the rest afterwards. We loved every moment of it. The producer Tony Bean pushed and stretched us, especially Esther our vocalist, but we always felt at ease even though it was very tough at times. Tony is a very graceful guy and we feel he brought the best out in us. (We've got better things to come yet though.) The engineer Colin Kelley was the coolest of guys who would always have the time to explain how and why things were being done and processed in certain ways.

We have never felt so at ease whilst recording. Some of our songs, although they had to be structured, changed into moments of worship. Check out "Rain", it wasn't meant to finish like it did but Esther just did what she does best and worshiped. The end is fantastic, we left it unedited. I don't want to sound super spiritual or anything, but often famous artists claim they felt the presence of a dead member of the band in their studios whilst recording; well, we had a similar experience except it was the presence of God. You can't beat that

Tony: Pick out three songs that you think are special and tell me a bit about them.

"Rain" is a band favourite because we constantly need the refreshing of the Holy Spirit and therefore relate very well to the song. "Someone Like Me", because God's grace is so amazing that even if I was the only person on the planet he would have sent his son Jesus for "someone like me". "Operation World" we like because we as a band have a global vision to go into all the world and tell of the Good News. We know this is our purpose as through our childhoods we were brought up in various countries and have travelled the world. Four of us speak fluent English, French and Spanish, the other just speaks Spanish as a second language. Our sound engineer Nathan Kemp, who is really part of the band, also works with Reinhard Bonnke out in Africa as a sound engineer.

Tony: I understand Australia's David Evans has been an influence on the band's attitude towards ministry and music. Tell me a bit about that.

David greatly inspired us as those of you may have seen a few years ago at the Cross Rhythms festival in Devon. We played as his backing band and although we were playing pop rock music somehow there was still an ability to get people into God's presence and minister to them at the same time. It is now one of our main aims as a band, to not only entertain, but to impart something of God to all who enjoy our shows. We are still expecting the signs to follow. (If you don't know what I mean read Acts and Romans!)

Tony: You're playing at the Cross Rhythms festival again this year What keeps you coming back? What is it about that particular event that draws you?

Cross Rhythms has had a special place with us ever since we did a gig on the Saturday morning four years ago. We were unheard of, it was early and certainly not a good time to be playing but loads of people turned up, to our surprise. I think the audience were pleasantly surprised as well. We were then asked to play with David Evans which really boosted us to push on and then for a while as RiverDeep started to struggle with its direction everyone at Cross Rhythms really supported us. And we are very, very grateful to them for sticking by us. We have now come out the other side and are pushing on for God, new album out, record deal, etc. You wait to see what happens at the festival this year! I hope you're as expectant as we are. God is going to do something NEW! and we want to be part of it. SEE YOU AT THE FESTIVAL.