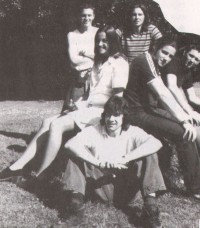 River Deep are a young and relatively new band hailing from Emsworth on the sunny south coast of England. A six-piece outfit consisting of Sam Warren (guitar/backing vocals), Esther Warren (lead vocals), Joe Warren (keyboard), Matthew Warren (bass), Peter Kemp (percussion), Peter Watson (drums) together with sound engineer Nathan Kemp. So, how did this collection of brothers, sister, cousins and best friend come to form a band? Sam explains, "My brother Joe and I were in Argentina at a Christian training camp when I felt the Lord telling us to get a music band together. I shared it with him and we prayed about it. We felt to sort something out on our return to Britain, so we did. We just got together. We are all family except our drummer but we've known him for years."

The usual difficulties of finding a suitable name ensued until one day when leading the music for Andy Elms. Andy spoke on the subject of entering the River of God and so River Deep were born. Taking this quite literally the band were photographed submerged in the River Solent one April day, a picture which can be found on the inside sleeve of their privately recorded CD EP. "We like the acid jazz style of music and that's what we started playing. I personally don't think that you can play the music you like and expect to sell it," continues Sam.

"I think that you have to play what people will listen to. Acid jazz is on its way out to some extent so we are doing more dancy music. It's basically a mixture of dance and funk." And your influences? "We listen to a lot of stuff like Earth, Wind And Fire and early Stevie Wonder but more recently to Stereo MC and Deelite. In Christian circles there's not much in the style that we play but we like Phatfish who we've done a gig with and much admire the Newsboys."

The songs originate from melodies worked through by Sam, Joe and Matt which the entire group build on. There's a good cross section of instrumental and vocal numbers in the River Deep repertoire. When, then, can you expect to see this new talent? "We have played in churches and feel it's good to start off with their support," explains Sam. "However, we feel the Lord has called us to play in the pubs and clubs. We also play in a few schools as well to all ages as low as 11."

What's with the Shed 7, Oasis, Blur connection, I hear you ask. Well, last year River Deep played a local venue called the Wedgewood Rooms where numerous well known bands, including the aforementioned, started out before hitting the big time. "It was great. We didn't advertise ourselves as a Christian band but let the songs do the work instead. We do other things as L well, like the Guinness advert with, Peter the percussionist doing the dancing! We like to entertain people but get a clear Gospel message across. It's all about sowing seeds."

With the active support of some of the churches' young men who converted several outbuildings into a sound proofed building and kitted it out with some borrowed recording gear, River Deep were able to record their first CD EP titled 'Sometimes'. This has brought them reviews in Cross Rhythms and Alpha magazines. Described as smooth, funky, full of youthful enthusiasm and commitment, 'Sometimes' is a collection of four tracks, two vocal and two instrumental, displaying River Deep's talents to the full. Excellent musicianship and non-compromising lyrics combine to ensure their success. Reviewed in Alpha alongside Ron Kenoly and Michael Omartian makes one think that a record deal is imminent. "A friend of ours who's a journalist is sending our material around. It's not on the cards at the moment, though I believe the Lord will open the doors when the time is right. At the minute we're very involved with the youth church which is based around more dancy music. We also run these events called Regenerate every four to six weeks. These are alternative praise style events where we use a lot of the 'Jumpin' In The House Of God' stuff alongside our own material. This keeps us quite busy."

With the promise of something exciting emerging onto the scene when will we be able to see River Deep? "We're taking it slowly this year as Peter and Esther are in their final school year, but when they finish next year we hope to hit the road in a big way."

Despite their acid jazz roots River Deep are now engaged in writing new material with a groovy hip hop edge to it. As Sam says, "We just love the groove!"

This group have a very mature attitude towards their music and with a little encouragement could do a great deal to raise the standard of British CCM. Watch out for them next year as River Deep explode onto the festival scene - it really is something to look forward to