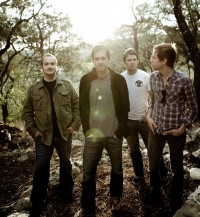 The Robbie Seay Band (sometimes known as RSB) have been releasing excellent music for a good few years now though it's the issue of three fan-funded EPs, 'Psalms EP Vol 1', '2' and '3', which are now bringing the fivesome critical acclaim. Houston-born Robbie spoke about his move to the lyrics of King David, Asaph and others: "By definition, I am a modern day Psalmist - though my understanding and passion for the Biblical Psalms, until recently, has been elementary. Sure, I had favourites that I would read and a basic knowledge of the more common passages but it was not a priority for me to include the Psalms when leading worship or to write new music for the Psalms. God changed that in me."

Robbie's first release was back in 1997 with the independent 'Robbie Seay EP' followed in 1999 by 'Thoughts Of You'. By 2002 it was the Robbie Seay Band getting the billing with the independent '10,000 Charms' EP though later that year that had been truncated to RSB for the 'December' EP and the 'RSB Live' EP (2003). It wasn't until 2004, though, that the independent album 'Better Days' attracted the attention of CCM big hitters Sparrow Records. A revised version of the album was given a big push by the label. Said Robbie at the time, "I had a lot of misconceptions about Christian music. I fell into a lull there for a little while where I was concerned and a little jaded about things. Through the relationship with Sparrow I've met some amazing people who want to do some amazing things. They not only care about the Gospel, which obviously is huge, they care about great art and great music."

After the EP 'Hallelujah, God Is Near', the band's second Sparrow album, 2007's 'Give Yourself Away', featured the track "Song Of Hope (Heaven Come Down)" which was a major hit on US Christian radio making number seven on Billboard's Hot Christian Songs chart. In 2010 the band released their most successful album, 'Miracle' but though it made Billboard's Top 200 and spawned a Deluxe Edition, by the following year the band were back to being independent again. With 2011's 'Rich And Poor' album the band had settled on a sound which hbucollegian.com described as "folk rock; part David Crowder, part Phil Wickham" and which "brings the passionate folk sound that bands like Mumford & Sons and Phillip Phillips have made popular."

Down the years there have been numerous changes to the RSB lineups, the current team consisting of Robbie Seay (lead vocals, acoustic guitar), Ryan Owens (bass), Ryan Wesley (electric guitar), David Keil (drums) and Matthew "Frodo" Kidd (electric guitar, banjitar, banjo, looper pads). Having effectively come off the road in 2013 Robbie and band members looked to their fans to finance a new recording. Robbie told reel-gospel website, "The reality is people don't buy music like they used to buy music. So what tends to happen for artists like myself, is you really have one very valuable connection remaining with a group of people. And that's a sense of community. And so, most artists are not going to get rich off recording music anymore. So the plus side of that is that artists now have an intense connection with. they're more than fans! These are friends! I say friends because these are people who want to invest their time, energy and resource in the music you're creating. That's an awesome thing. People could even say 'Hey I've got a dollar, I don't even have ten bucks to buy the music'. And some would say 'I've got $500&#8242;, or anything in between. So to answer your question it was awesome, a complete joy, but also very humbling. When people start investing in what you do in something of this magnitude, it's a big obligation to them. And you feel like you owe it to them to produce the best album that you can create."

'Psalms EP Vol 1' begins with the track "Psalm 96". Robbie explained he chose to start there. "When we were singing the final several verses of Psalm 96 - and it's a powerful expression: 'Let the heavens be glad, let the earth rejoice, let the trees of the forest sing for joy.' Honestly when I was thinking about this Psalm it reminded me of spring. I don't know what spring is like for you guys - and we don't have a really intense winter here, but we have enough winter that when spring shows up, there's new life. The trees in my backyard start to grow new leaves and my grass starts to get green. This psalm - specifically that group of verses - it felt like spring to me. I don't know if it's weird to think of Psalms in seasons but that felt right to me. It also felt right to start this whole EP with that. Ultimately you're gonna find a lot of different things in the Psalms. You're gonna find sorrow, you're gonna find joy, you're gonna find doubt, you're gonna find fear. You're gonna find men begging God to rescue them. But ultimately, the Psalms - at the core of them - is praise. And this Psalm is a praise psalm. So it felt right to start this EP with Psalm 96."

The second volume of the Psalms EPs was released in May 2014. Seay's favourite track on the project is "Psalm 3 (A Shield About Me)". Explained Robbie, "It starts with a two minute instrumental piece arranged by Matthew Kidd and seems to be the most intimate of the Psalms on Vol 2. David was fleeing his son Absolom and the army in pursuit to kill him. We get to peer inside a moment of turmoil in David's life and sing his response to God. 'For You, O Lord, are a shield about me. You are my glory and You lift my head' is stirring constantly within me after singing this Psalm. Praying I have the same resolve and trust in God in moments of chaos in my own life." "

Now Vol 3 is picking up accolades. 365daysofinspiringmedia wrote, "The band have.a unique ability to write the Psalms into songs that are interesting, catchy and encouraging. Maybe Sons of Korah will have competition in the future?"

The final comment of putting new music to the Psalms goes to Robbie. "When I'm writing any other type of song, I can kinda make it up. I can sing what I want to sing, and play it how I want to play it. And when you start diving into the Psalms, you realise there's some pretty intense history behind each of these Psalms. I love it, but I tend to think there's a big responsibility. Even if it's not some hugely popular song. Even if we record it and [only a few people] listen to it and appreciate it, I still take it seriously. Trying to respect what's in Scripture and the context and history behind each of the Psalms."