Rodney Matthews: CD/Christmas card for the artist and Jeff Scheetz 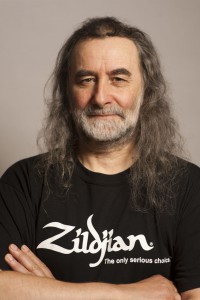 To countless rock fans Rodney Matthews is the greatest fantasy artist of them all, his designs featured on the iconic album covers for acts like Asia, Thin Lizzy, Nazareth, Praying Mantis, Tygers Of Pan Tang, Magnum, Barclay James Harvest and Rick Wakeman not to mention occasional sleeves for Christian acts like Seventh Angel, Veni Domine and Detritus and book covers for authors like Michael Moorcock. Rodney also plays drums when he gets the opportunity and last year recorded a track with Christian guitar virtuoso Jeff Sheetz, Asia's bass man John Payne, former Yes star Oliver Wakeman on keyboards, Magnum's Bob Catley on vocals and Pete Coleman on the bagpipes and recorder. The song Jeff Sheetz, Rodney Matthews & Friends recorded was the much loved carol "I Saw Three Ships" and in 2014 a CD of the song and a Christmas card featuring a stunning Matthews illustration were sent to loved ones. Now the unique CD and card package has been made available to the general public at Etsy (www.etsy.com/shop/RodneyMatthewsStudio) throughout Europe and the US through Amazon. The Christmas track is a forerunner to a "prog-ish" styled album, currently under development. Cross Rhythms quizzed the veteran designer/drummer to get the story behind "I Saw Three Ships".

Tony: How did the "I Saw Three Ships" CD and card come into being?

Rodney: "This project goes back a very long way. The principal guitarist is Jeff Scheetz from Kansas City, who I first met at the Christian hard rock event Meltdown in the mid-'90s. Jeff and I hatched a plan to do an album, with each track being influenced by one of my images. Needless to say, the practicality of this trans-Atlantic endeavour involved much time and money, neither of which was particularly forthcoming at that time. Eventually, in 2007, I boarded a flight for the US, armed with some examples of my artwork and a couple of pairs of drumsticks. Jeff managed to borrow some drums from his band drummer, and setting up in his "garage" studio, we got down to writing some stuff. By the end of the ten days that I was there, we had recorded some rough ideas for tunes, based upon the images Trinity, The Heavy Metal Hero, Rivendell, The Leavetaking, The Granite Curtain, The Hop and so on. We had about 10 possibilities. I was due to return to Jeff's place a few months later to continue our work.

"My wife Karin had been bravely fighting breast cancer for the previous seven years, but her health started to deteriorate to the point where she needed me to be present full-time. The album project was forgotten. Karin went home to Jesus in 2009. For three years thereafter, I didn't want to know about anything, until one day my daughter Elin indicated to me, that just before mum went, she had said 'make sure your Dad gets back on his drums and finishes that album.' I should have known that there was something special about this project. A couple of years before, I had been driving to a little church in North Wales with Karin and a Christian friend Bill. We were on the A5 approaching a bridge over the River Dee. Bill had asked me what I was working on at that time. I replied that I had just finished a pencil sketch of an image titled Trinity, which I intended to use for the cover of an album I was doing with Jeff Scheetz. I started to elaborate, saying it features a bridge and waterfalls, with three white swans representing Father, Son and Holy Spirit, flying across the picture from left to right. We were about to drive over the bridge and as I finished my sentence . THREE WHITE SWANS flew from the river, from left to right across my windscreen. I had never seen swans on that river before, even though I had crossed that bridge hundreds of times.

"I rang Jeff Scheetz late, who answered the phone saying 'let me tell you something before you start'. He went on, 'I was driving home from a gig in my truck yesterday, when my mind wandered back to our album idea. Pulling the CD of rough recordings from my glove compartment, I started to play it, commencing with the track Trinity, which just happened to be first up. As the tune began to play . THREE BIRDS [I think they were actually geese in this instance] flew across my windscreen from left to right.' I immediately replied 'listen to this one!' and recounted my experience. Coincidence perhaps? - get a life!!!

"By 2014 I had assembled the musicians I wanted for the album, but, as completion looked far off, I asked Jeff if he could send me a guide track of the 'Three Ships' that I'd heard him play years before. I hired M2 Studios for a day to put down the drums. I then sent the track to the others; John Payne (Asia), Oliver Wakeman (Yes), Bob Catley (Magnum) and multi-instrumentalist Pete Coleman. The track was completed in late 2014 as an accompanying item in my Christmas card for friends. As it seemed to be well received, I decided I would put it out this year on a wider scale."

Tony: Did all the musicians playing on 'I Saw Three Ships' record their parts separately in different places? What sticks in your mind about the recording process? 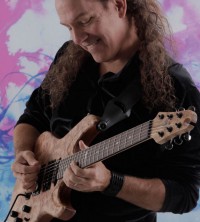 Rodney: "The answer here is yes. Jeff Scheetz recorded all guitars in his US studio. John Payne put down the bass in his Las Vegas studio. Oliver Wakeman and Pete Coleman did their parts in their respective UK studios, whilst Bob Catley came into M2 Studios (where Magnum always record) to sing the vocals. Then everything was emailed back and forth. The question that I ask myself however, is how have I managed to get all these talented and respected musicians to risk their careers playing with a part-time drummer?! I thoroughly enjoyed the recording process, particularly listening to the developing sounds of each of the participants' parts, as they were added."

Tony: You have a lot of fans for your artwork and many of them know about your Christian faith. Presumably you would be looking for Christians and non-Christians to buy the CD/card. What is your view on the commercialisation of Christmas?

Rodney: "I would hope that this card and CD would have something to say to Christians, but also to others of different persuasions. After all, I have friends who are pagans, agnostics, a druid and the undecided, who dig my stuff and buy it. I am grateful to all comers. One of my fans recently commented 'it's good to see you putting the Christ back into Christmas' - I think that says it all."

Hi sir,
Great article,so many things I leared about Mr Matthews I did not know.Not only is he a world class artist,the best in my book but Mr Matthews is also very grasious,iIve have had the pleasure of chatting with him thru e-mails,and he really is a down to earth wonderful person,like his friend said its nice to put Christ back in Christmas,so many people really have forgot the true meaning,again thank you for a very insightful article....................Joseph