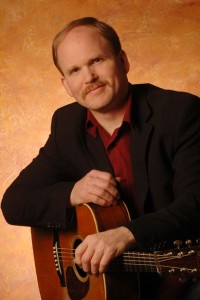 The rise of Ron Block from rock'n'roll roots to bluegrass, from a banjoist in Alison Krauss & Union Station to an accomplished solo artist, involved a devastating self-esteem crash that threatened his career and strengthened his relationship with God.

Born in 1964 in Inglewood, California, Ron Block was surrounded by music in his youth and worked at his father's rock'n'roll music store. His first venture into music was the purchase of an acoustic guitar in 1975, but it was to be the banjo and the sound of bluegrass that encapsulated him. Having promised his father that he would pursue a career in business, he rebelled and applied to the country music programme at South Plains College in Levelland, Texas. While this was an act of rebellion, Ron has since reflected that had he gone down the rock'n'roll path, his life would have been different and probably rebellious in far different ways. In his own words bluegrass music was "God's calling in the ultimate sense."

While at South Plains College he formed the band Weary Hearts with Mike Bub (bass), Eric Uglum (guitar), Butch Baldassari (mandolin) and Chris Jones (guitar, vocals). They released three records in their time and were key to Block's early development of a distinctive playing style, which equally displayed melodic soloing and picking akin to bluegrass pioneers Earl Scruggs and JD Crowe. Weary Hearts became a nationally acclaimed bluegrass act before they went their separate ways in 1990.

Fast-forward to 2007 and Ron Block has managed to release two solo albums while still remaining a player in the Alison Krauss & Union Station band. He has also had time to reflect on his spiritual and musical development. He is the band's banjoist and guitarist, and one of the principal songwriters. 2006 saw Block awarded with a Dove for the Best Bluegrass Song Of The Year for "A Living Prayer". Yet after playing with Alison Krauss & Union Station since 1991, Block hit a low, as he told journalist Lizza Connor: "By the time I joined Alison Krauss & Union Station I was riding high because I believed in my ability. But when your worth is based on what you do, what you do is going to fluctuate, and your worth is going to fluctuate too. It was a constant roller coaster and finally there was a complete crash. God said one thing about me, and I was saying the opposite, so I had to come to grips with that."

The recording studio found him driven to the highest possible standards of musicianship, as he reflected with journalist Stan Friedman in June of this year: "I was always saying, 'Let me play that part one more time. Oh, that note was a little flat, I'll do it again.' I began to believe I was no good and that I couldn't play or sing at all because I couldn't do it perfectly. My perfectionism was kicking into high gear, and it was killing me. My perceptions and false beliefs, and through them my actions, were completely whacked out. As my sense of musical worth fell, I wasn't Mr Nice Guy anymore; all kinds of bitterness and resentments started coming up. It's a tribute to how much the group loved me and loved the way I played that I'm still in the band."

It wasn't long after his induction into Alison Krauss & Union Station that he began to let God work through his perfectionism and the insecurity that arose from it: "God started to deal with the false identities I'd created from childhood. Around 1992 I prayed, 'Lord, work your will in my life no matter what the cost.' God took that and ran. I've always known the Bible has the answers, so I started digging through it. I started finding out about my identity in Christ, who I am in him, and who he is in me. I'd never paid much attention to verses like those before, but when you're desperate and you think you're a wretched person, they're really powerful. So for several years, I was being transformed by this renewing of my mind, and I came out on the other side a different person. That was my second major epiphany, and again the Bible took on a whole new layer of meaning."

Having also turned to production in 1996, with the Forbes Family's album 'In The Shadow Of Your Wings', there did not seem much more to achieve for the 13-time Grammy winner. 2001 saw the release of his debut solo offering 'Faraway Land', addressing his self-esteem crisis with themes of brokenness and redemption. In 2007, Block still sees the vision as to create songs of personal experience for his solo material whilst remaining an integral part of Alison Krauss & Union Station, who have just finished a national tour of the States. A vital team player in Union Station, the same team ethic infuses his solo material. This year brought his second solo release with 'Doorway', recorded with the help of Union Station band-mates Barry Bales (bass), Dan Tyminski (guitar), Jerry Douglas (dobro, lap steel), additional musicians such as Adam Steffney (mandolin) and Alison Krauss herself, with harmony vocals on the title track and viola on "The Blackness Of The Need".

His literary influences have come to the fore on both of his solo releases, as he explained the influence that the writings of C S Lewis and George MacDonald have had on him: "I think I was eight years old when I read the Chronicles Of Narnia. Years later, I read where C S Lewis said George MacDonald baptised his imagination - it was in MacDonald's book Phantastes where he first encountered holiness and goodness. For me it was the Narnia books, and after reading those in my early years, I began to read almost everything Lewis wrote: Mere Christianity, Screwtape Letters, The Great Divorce, Till We Have Faces. After I had gone through a lot of those over and over, I started going through MacDonald's work. Other inspirations have been A W Tozer, A B Simpson, Norman Grubb, Dorothy Sayers, and lately William Law and Jeanne Guyon."

The particular impact of Lewis' and MacDonald's imaginative imagery on the title track of his latest release was not realised immediately: "'DoorWay' came really quick and I didn't realise the connection when I was writing the song. The image of a freestanding door popped into my head, where it's in the middle of a beautiful field. But the door is open and on the other side is the desert and you can see into a whole different place. I had that image in my mind, but didn't think about it until after I was done with the song when I realised the wardrobe in The Lion, The Witch And The Wardrobe was a doorway. Lewis uses doorways in Prince Caspian and The Last Battle as well. And MacDonald uses the image of a doorway in Lilith, a mirror that's a stepping off point into another realm."

Ron's honesty is tangible in his personal reflections on life and his music in solo and band projects which deal with lost love, loneliness and desperation. He responded to the notion that Christians should only listen to positive music with this final reflection: "I don't think we can quarantine negative aspects of things and put them off in the corner and then say we're only going to listen to something 'spiritual'. Real life will have sorrow. Jesus dealt with that all the time. We can't have the resurrection without Gethsemane and the crucifixion. If we took the same attitude with the Bible, we'd only have about a third of the book to read. It doesn't work that way."

The opinions expressed in this article are not necessarily those held by Cross Rhythms. Any expressed views were accurate at the time of publishing but may or may not reflect the views of the individuals concerned at a later date.
About Tom Whitman
Tom Whitman is 21 and is studying multi-media journalism at Bournemouth University.

A Living Prayer inspires me, makes me cry and gives me hope all at the same time.

Excellent, very informative and well written article. Mr. Whitman is sure to have a bright future ahead of him.