His new album, will no doubt be another huge selling blockbuster. But the worship leader from Coffeyville, Kansas Ron Kenoly is no usual recording star as Martin Purnell found out. 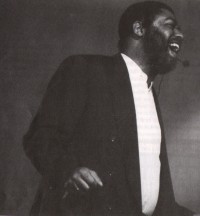 If the mainstream record industry is intrigued by the DC Talks, Jars Of Clay and the other contemporary Christian music acts who sell a million plus of an album, it is positively bemused by a Ron Kenoly. For Ron is not a CCM artist but a worship leader. Despite a gold album for 'Lift Him Up', huge sales for his other four albums and big advance orders for his new set 'Welcome Home', the ex-distributor of towels at Alameda College locker room has a clear perspective on his role in Christian music.

"So much of Christian music is for the most part entertainment. So much of it is talking about God - what God has done, what God will do. That has a very good and valid place in the body of Christ. However, a worship leader is saying, 'Come and let's worship God together.' It's not about my last hit record. It's not about my vocal exercises, or artistry or ability. It's about you and I doing what King David says in Psalm 34, 'Come and let us exalt his name together.' That's the agenda."

He continues, "The worship leader is just a facilitator for a move of God. All (he or she) does is say, 'People, let's put our hearts and minds on the fact that Jesus is here.' It's kind of like what the bailiff does when the judge comes into the courtroom; (he) says, 'All rise. He's here.' The worship leader is simply an usher in the presence of the Lord."

As well as recording four immensely successful albums for Integrity Music Ron is also one of the music ministers at Jubilee Christian Centre in California and, as of June 12th, Ron possesses a doctorate in ministry and sacred music. I met the extremely busy father of four as he prepared to minister to a sold out throng at the London Arena. I asked him about his doctorate.

"It means a completion of years of study and years of pursuit. For so long I've encouraged people to never stop growing, to never stop expanding, to never stop moving forward. I know that once we stop moving forward, we become stagnant and when we become stagnant we become stale. So it's important that every aspect of our lives we continue to grow. As long as we have mental facilities, physical abilities we need to be in pursuit of something greater, to move beyond where we are. Jesus said first to do great things so until we've done some great things we haven't obeyed him."

What did Ron think would be the advantages of his hard won doctorate? "I think more than anything it will bring respect from the academic community in the United States. It's been a long desire of mine to start a praise and worship academy in the United States and in different parts of the world too. As I have progressed in my own ministry I've come to realise that there aren't many schools that specialise in the praise and worship arena of ministry. I've been able to write a book with my pastor on the subject of how you can be led into Spirit-filled worship. As I travelled around in the United States and the rest of the world, I've found that there's a hunger that exists in so many people who want to know how to do this in an effective way. I think that God has given me a few things to say to the body of Christ and especially to the community of musicians and singers, who aspire to draw closer to the Lord and to lead other people into the presence of the Lord."

Despite Ron's vigorous insistence that his calling is to 'minister' rather than to 'entertain' isn't it true that some people will view his live praise extravaganzas primarily a sanctified entertainment?

Being an African American, Ron has clearly brought much of the fire and uninhibitedness of the black church experience to white worship music. Did Ron think the world was more or less racially prejudiced today?

"I think it's getting better, I think racial relations are getting better. But in America there's still a real polarisation though. I don't talk about the OJ Simpson trial a whole lot, but I think the results of that trial really uncovered a major sore and exposed the polarisation in the United States. Whereas the majority of African American people were excited that OJ was acquitted, the majority of the Caucasian community was convinced he was guilty. Basically, that just exposed a huge lack of understanding and it exposed a lot of things. That's more of a social issue - I wouldn't necessarily call it a spiritual issue. I think people who know God don't see black and white people who really know the Lord, they see brothers and sisters in Christ, and they don't really focus upon colours. The love of God has no colour."

I asked Ron about those within the Church who found it difficult or impossible to respond to the rousing praise and worship celebration.

What was it, I asked this most effervescent worship leader, about God's character that most blessed him?

"His patience with me, 'cause I've messed up so many times. With my family I've messed up. So many times I've missed the mark, thought I heard from God and was listening to my own ego and pride instead. I've failed on several occasions as a father, but every time that I have run back to Jesus and confessed my weaknesses, my failures, my doubts, he restores me and cleans me up pretty good. I've learned to run to him instead of run away from him."

What, I asked the veteran music minister, does the word 'love' mean to him?

"Responsibility. I think that when we use the word love, when we throw out that word and we say that we love something, then I think love compels us to be responsible to that object we love. When we say that, for instance, I love my children, I have a responsibility to provide for them and to protect them and to do all the things that are necessary for them to grow up healthy, wealthy and wise. I love my wife and so that means I have a responsibility to attend to her needs, and to stabilise, to present a stable atmosphere in which she can love me and do the things she's responsible to do as a wife. I love my church so that means I have a commitment to Jubilee Christian Centre and the congregation there, and to submit to my pastor, the shepherd that God has established in my life; and so I have a responsibility to go to my church and to contribute, to share in the activities that are there, to give money (to the programmes that are there), to tithe; to do all of those things. So love always requires a sacrifice and responsibility. If you love something then you are compelled to prove it, you are compelled to show it. And that's what worship is about, when we say that we love God then how do we prove it? What do we do about it? Do we treat our brother right, do we help the sick, do we help the poor? How do we demonstrate it? If we love God then we will be obedient to what he's told us to do.

"There's a whole teaching that my paster's done on the subject of love. We as Westerners, Europeans and North Americans, take the word love and we take a lot of expressions and condense them and throw them into and identify them with the word love. When you go back to some of the original Greek where love being agape, eros, filial, all of those, and there's a whole teaching that goes with that word. It's important I think that some point in time that every believer gets to know and understand what that word really means and what it encompasses. I think that more than anything the most important expression of love is what we would term from the Greek agape and that's the love that God has for mankind and the kind of love he has for you and I. He loves us and there's nothing we can do about it. And he loves us regardless of what we've done or what we do. He still loves us, and he's got an open door to which that we can return to anytime that we've drifted away and we can see the beauty of his grace and his mercy and his holiness and his righteousness and his justice. We can see all of those things when we are drawn, or allow ourselves to accept his love. I think probably the greatest expression of love of all was getting back to giving he gave his only son, so that we would not have to suffer the curse of sin. But he gave his only son Jesus Christ, so that we might be able to come in that right loving relationship with him."

I asked Ron about his recent move into writing musicals. "I'm looking forward to seeing those put on a legitimate stage. They are musicals on the life of Jesus Christ. One is called 'Jesus Is Alive', another is called The Perfect Gift' which is about the Christmas story. 'Jesus Is Alive' is a musical based on the week of passion from Palm Sunday to Resurrection Sunday. 'The Miracle Man' is one that covers the ministry of Jesus."

Asking the singer to pick a favourite track on his album proved difficult. "That's like saying which one of my sons is my favourite! Just let me say this, all of the albums, songs have very special meanings. I think probably the 'Lift Him Up' album has been the most far penetrating, in terms of impacting churches. Let me pick two from that, one would be 'All Honour All Glory', another would be 'Hallowed Be Your Name' because it has a certain line in there that says, 'I'm honoured to sing your praises Lord' and I'd like to close this interview by saying that I'm honoured that God would just let me be a small part of what he's doing in the earth and through the music that he's given me, he's allowing me to sing it, to see the fruit of my labour, see the effects it's having in so many different parts of the world and especially within the churches, on the planet here."

The opinions expressed in this article are not necessarily those held by Cross Rhythms. Any expressed views were accurate at the time of publishing but may or may not reflect the views of the individuals concerned at a later date.
About Martin Purnell
Martin Purnell lives in Stoke-on-Trent and is a regular broadcaster for Cross Rhythms.