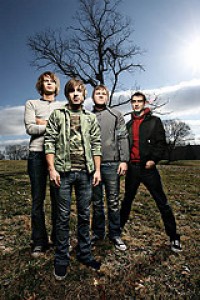 Lots of bands promise progression with each new album but few have delivered as spectacularly as Run Kid Run. The foursome from Carmi, Illinois and Morganfield, Kentucky has previously made a good fist of careering punk rhythms and high energy bravado but no one would accuse them of subtlety. In fact, when reviewing their 2008 album 'Love At The Core' the Cross Rhythms scribe commented "it all starts to sound a tad predictable." But with their new album 'Patterns' Run Kid Run have made a giant leap forward.

Said the band's frontman David Josiah Curtis, "I would tell the old school fans that while there's definitely a new side to this record, it's not an extreme turn and this is still definitely who were are. We've just progressed as artists and grown into who we want to be, but this is still the same band. There's definitely going to be plenty of pop/rock sing-a-longs, but with a new twist."

For the album the band teamed up with producers Matt Thiessen (Relient K frontman) and Mark Townsend (Relient K, The OC Supertones). Said Curtis, "Mark definitely brought on the rock sound and he loves messing around with guitar sounds, different amps and tons of pedals. And Matt definitely brought the pop side to the record concentrating on melodies and lyrics."

'Patterns' is already receiving enthusiastic reviews Stateside. One reviewer wrote, "To say that I was surprised would be an understatement. It's not that they mellowed too much, they just shifted and grew. Run Kid Run has more of a pop rock sound now but the sense of fun is still there. It just has more depth." Another reviewer enthused, "Their third full-length, 'Patterns', exhibits absolute respect for their Creator while embracing a radio-friendly sound that could push the band into the mainstream. It helps considerably that the quartet have managed to create one of the best pop-rock records of the year." 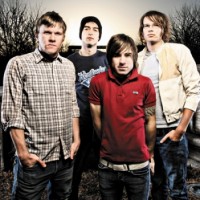 Run Kid Run were formed in 2006 and originally consisted of David Josiah Curtis (vocals, guitar), Neil Endicott (guitar, piano), Lyle Chastain (bass) and Matt Jackson (drums). Curtis told JesusFreakHideout how the band's unusual name came about. "Run Kid Run is actually a song title from this band that we used to listen to called Rocket From The Crypt. The crazy story is, it gets kind of confusing, but Neil our guitar player, back in high school, used to be in a band called Run Kid Run, and we were in another band called Side Walk Slam and then we ended up stealing them, and then we changed our name later on back to Run Kid Run."

It was at Illinois' famed Cornerstone Festival that the band were discovered. Explained Curtis, "We actually asked our friends Calibretto 13 if they'd let us play three songs before them, 'cause they were signed to Tooth & Nail and I'm like, 'Do you care if we play three songs?'. We were going on the road with them that summer. They let us play, thankfully, and Brandon Ebel, the president of Tooth & Nail walks up backstage and hears us and he's like, 'I gotta sign these guys'. So that was pretty much like right place, right time. God really just worked that out. We actually had sent in a demo earlier and got no response at all."

The band's debut album was 'This Is Who We Are'. The album was produced by James Paul Wisner (Dashboard Confessional, Further Seems Forever). Said Neil Endicott on its release, "'This Is Who We Are' is about finding your true sense of self and then holding on to that with all you have., We want people to have something they can listen to that makes them feel better about whatever is going on in their life."

The project made 33 in the US Christian charts. Two years later Tooth & Nail released 'Love At The Core' with Run Kid Run's new bass player Paul Stewart established in the band. Like its predecessor it was produced by James Paul Wisner. Curtis spoke about the album, "We didn't have a theme that we were gonna overall write about, but it just ended up where 'God's love' kept appearing. That was like the overall main theme, and there's a song there called 'Love At The Core' and it's about asking God for his version of love, not the world's version of love. Y'know, not the 'diluted down', lust, jealousy - we don't want that because that is what the world has kind of tainted the word love and not really given the real ultimate sacrifice. So it's our prayer, our cry to God: 'Just filtrate us with your love, so that we can rub up against the world and show you,' and also to our fellow brothers and sisters in Christ, just to show love, 'cause love is the only thing really that will affect people in the long run."

'Love At The Core' produced an impressive four number one songs on the ChristianRock.net Top 30, "Come Home", "Sure Shot", "Set Your Dial" and "My Sweet Escape". Now their new album seems set to go even further. Whether or not 'Patterns' does indeed crossover to the mainstream, one this seems pretty certain though, that Run Kid Run will stay spiritually grounded. Said Curtis, "Matt's dad's a pastor, my dad's a pastor. Not that that means you are going to Heaven, by any means, you know, but we've got families that have really filtrated our lives in a huge way in the spiritual side. Growing up, you realize how much of a blessing that is. I mean at first it's like 'Aw great, yeah mom and dad love us and teaching us to love God.' But then you realize when you grow up, everyone's not that blessed. Besides that, [we] have to set aside time. Like today, [we listened] to a worship album in the back of the van and wrote some psalms, but I mean if you don't set aside time on or off the road. . . Once in awhile, during a late night drive, a conversation will get going and then we'll be like, 'Well, this has been on my heart. . .' Also, we have good churches when we go back home. They're all spread out, but we have good churches that we're really involved in."