Tony Cummings meets up with one of the great voices of CCM, RUSS TAFF. 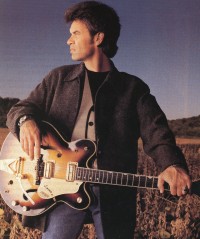 His is one of the most wondrous instruments in Christian music, a near perfect rock 'n' roll voice, able to growl deep and low like a Mississippi blues moaner yet shriek fast and high like an opera contralto on helium, a voice capable of offering sassy blue eyed soul one song and anvil heavy rock the next. Russ Taff has been a big name US gospel star for more than a decade.

The Arkansas-born singer was thrust into the big time of Dove Awards and five star hotels in 1977 when he joined the Imperials as the quartet metamorphoed from down home Southern gospel harmonizers into soul-tinged pop-gospellers to help spearhead the emergent 'contemporary Christian Music' movement. In 1981 Russ cut out for solo stardom and in 1985 found it with 'Medals' one of the biggest CCM sellers of the year. But a spiritual crisis led to a re-evaluation of the whole direction of his life and music and when Russ returned to offer two dazzling albums 'Russ Taff (1987) and the self-produced The Way Home' (1989) it was as a man tried-and-tested in the furnace of self-searching.

Russ limped to our interview in the Word Records caravan at the Greenbelt Festival (he'd pranged his leg playing basketball). In a little over two hours he was to utterly devastate 20,000 main-stage punters with a rock 'n' roll exhibition of such power and passion that even the most jaded Top 50 devotee would be forced to admit that these American Big Fish in the little CCM pond have the musical muscle to deliver.

But now Russ sat, relaxed and contented, answering my probing questions with the friendly air of a man who had no thoughts of PR-puffs or projecting any kind of image.

What would you say were your musical roots, Russ? Country music?

"I grew up in that. I have four brothers and my dad is a preacher. My main roots were, I think, black gospel. My mother's favourite singer was Mahalia Jackson, so we had a lot of her music growing up. My dad was the kind of preacher where everything was wrong. Especially if you enjoyed it, it had to be wrong! My mother had a stereo and collected a lot of black gospel records and a lot of country gospel - Buck Chambers and a bunch of guys, back in the early 60s, who would play and sing gospel country. Then one of my brothers started going to quartets that would come to California where I lived at the time, and he would take us all out. So my brothers and I, we got together and started singing quartet kind of music and that went on for a while. In fact we still do it sometimes when I go home, we get together and sing. And then when I was 17 I heard Grand Funk Railroad and my whole life changed!"

Have you heard any Mark Farner (ex-leader of Grand Funk Railroad) Christian albums?

"No, I haven't heard any yet. In fact I just did a song with him. Eddie De-Garmo was doing a record and he asked me and Mark to come in and Mark sang with him a little bit. Of course being a teenager back then it was such a phantom march to meet him. He's in his early 40s and he sounds great. I was just thinking, there is hope, we rock 'n' rollers can keep going!"

How did you come to join the Imperials?

"I had a band in Arkansas, my dad was pastor of a church there, and we were trying to introduce contemporary Christian music to our school and to our city. It's a real small city, about 37,000 people. So we raised money and promoted an Imperials concert. About all that was out then, seemed like, was Randy Matthews, Larry Norman and a few others. So we brought the Imperials in and they heard the band. They heard me sing and two years later they offered me the job. I wasn't knocking on no doors, I was just singing around. I feel very fortunate cause a lot of my friends had to knock on a lot of doors. I came to Nashville and auditioned for the Imperials and that was that."

Didn't growing up in a world where Christianity was almost part of the air you breathe make problems later for you?

"Oh yeah. You absorb everything. You don't think. By the time you are old enough to think you have so many answers, you have an answer for everything and you haven't even had a question. It's dangerous because you don't know who you are, you don't know what the world is, you don't know anything about life at all but here you are, you have all the solutions. So you're growing up learning problems but you already have the solution before you ever get there. I don't think it should be that way. In fact about five years ago my brain just blew up anyway with all of it because I was conditioned. I always tell people that if my dad was a plumber I would probably have been a pretty good plumber. But my dad was a communicator and my mother was a singer and I grew up in a home where my father sang and preached and my mother sang. I learnt how to do that very, very well by the time I was just little. They taught me and trained me in all of this and I went out into the real world, as I call it, with all these answers and hadn't really lived at all and it was very confusing and very hard. I went to Bible school for five months and when I got out I didn't know how to relate with the real world."

Was there then a level of artificiality in being a "professional gospel singer?'

I really appreciate you. Think youâre an awesome singer and song writer. Please stay close to Christ? All I can say is you have blessed a many of people and Iâm one of them.maybe you can write a song about my husband and I. You see we met in a little church here in ark. I was nine and he was 12 he ask me to be his girl friend and I said yes. We never dated anyone else we grew up got married. Weâve been married 45years this year but God decided he needed him more than me so he took him last week.Theres a true song out there because only God could love him more than I do. He was an awesome guy and my strength. So please stay in his will because you never know when itâs gonna be you and I wants be ready!0

I just have to say that Russ Taff is a favourite in our family. He always comes across with such humility and such a love for God - and what really stands out is his love for music and his appreciation of other performers - I am speaking in particular of his appearances in the Gaither Homecoming DVDs. We just love him.