SOS: The ska worshippers who got them skanking in the aisles 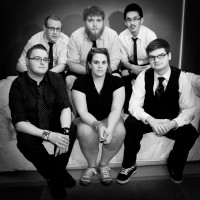 Cross Rhythms was spot on when it called SOS "festival favourites". The Reading-based band might have two names - many fans know them by the longer original Sounds Of Salvation - but that hasn't stopped them gaining a vociferous following, particularly at Greenbelt. With an astonishing 14 different appearances at Britain's premier Christian arts festival the band have connected with many thousands who've been uplifted by the band's ska injected rock worship. With Cross Rhythms radio currently playing their deftly tongue-in-cheek anthem "Facebook" and the band currently working on a new album with producer Dez Minto, now seemed an appropriate moment to quiz founder/singer Michael Whiteman to get SOS's story.

Their roots go back seven years. . .or so. Explained Michael, "The starting date of SOS is disputed as we existed for a while as a house band for an event called Sounds Of Salvation, but we think approximately 2004. The original lineup was myself (vocals), Rebekah Whiteman (vocals), Chris MacLennan (guitar), Emma Lowth (bass guitar), Calum Smith (trombone), James Pollard (tenor saxophone), Hannah Wilson (alto saxophone), Peter Kernthaler (trumpet), Andy Edwards (trumpet) and Patrick Smith (drums). When we first started we weren't really a ska band, more of a soft-rock worship band, but our original guitarist loved his ska and we knew some guys who played horns so we gave it a go. It all kind of exploded from there. Since then we've really got into ska, and yes we love the Orange County ska scene, especially the Christian ska bands from the late '90s. We're very excited that Five Iron Frenzy are active again."

Michael continued, "We definitely started out as a worship band and for a long time just played existing worship songs in the ska style, which was pretty unusual and got us noticed. Gradually we began to write our own songs but we still include some worship tunes in our live set and there's a few on 'Nuking The Fridge Live'. We want to express something of the excitement of being in a relationship with God and to make musical worship as fun as it can possibly be."

As well as bringing the highly unusual ska element to modern worship SOS also bring humour into their dynamic stage performances. How did the humour bit develop and have they encountered Christians who are offended by their incorporating laughter into praise and worship performances? "I think the humour has gradually evolved over the years as we've become more comfortable with who we are and what we're about. I've never actually had a conversation with anyone who's had a problem with the humour element of our live shows. I hope we make it clear that we actually take our faith and our music seriously, just not ourselves! All the jokes we make are at our own expense! We are after all, and I think I can speak for the entire band here, a massive bunch of geeks. Not nerds. See this diagram; http://laughingsquid.com/nerd-venn-diagram-geek-dork-or-dweeb/."

Down the years SOS have made occasional sortes into the recording studio. Their first independent release was 2006's 'Like It Is'. Talking about the album Michael commented, "I think we were still finding our feet then and hadn't really settled into the ska groove. The recording is pretty raw (or rough around the edges) but I think there are still some good songs on there, including 'Anthem For A Broken World', which remains in our live set today and is on 'Nuke The Fridge Live'. We recorded bits of 'Like It Is' in church and bits of it in our flat, which was pretty annoying for the shop we lived above! I remember the old PC we were using blew up quite near the end of the recording process. Literally, with smoke and everything! That was very stressful. We prayed for healing of the computer and miraculously it came on for just long enough for us to get the data off onto an external hard drive, and then it died again."

The band's next album was 'S'ka Gje', recorded in 2007 and released in 2008. Said Michael, "That was mostly recorded at my school, where I teach music technology and have access to a small studio. We were actually playing some of the songs that are on 'S'ka Gje' before we'd even released 'Like It Is'. That was at the time when we had a different bass player for every other show and I think there are three different bassists on that album, one of whom, David Addis, also played the guest guitar solo on a song called 'Right', which we can now never play live as no one else could ever manage that solo! It's quite something."

Continued Michael, "We knew that we wanted to get some help with our next album and started raising money to pay for some pro studio time, but in the meantime we decided in 2011 to record an EP, 'Nuking The Fridge', so that it wasn't too long between releases. 'NTF' was also recorded at my school and was much quicker to record than anything we've done before, I guess because we're just all a bit older and more experienced. We recorded it in about a week and had it mixed and out within a couple of months. 'Fridge' was a lot of fun to record and I definitely think it's the best thing we've done so far." 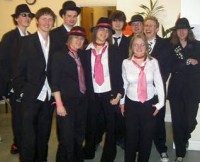 'Nuking The Fridge' contained the song "Facebook" which quickly established itself as a fan favourite and contains the line "Even Tim Hughes is on Facebook." Michael spoke about the band's social media song, "I spend too much time on Facebook and I'm pretty sure I'm not the only one! I got to thinking about this thing that we call 'friends' on Facebook or any social media site, which really doesn't mean anything. I personally have over 500 'friends' on Facebook and I don't know who most of them are! Don't get me wrong, I love it and I think it's great for keeping in touch with people you might not otherwise see and finding old school friends, etc, but we have to be careful not to let it be a substitute for real relationships with real people. At the end of the song I contrast a Facebook friendship with the relationship Jesus wants to have with us. The lyric goes, 'He says that actually he just wants us to know him, like in person, face to face, wants us to know him. Way more than a Facebook friend could ever know him.' Jesus isn't happy with a fleeting acquaintance where we just tell him what we're doing now and again. He wants more than that."

So has the renowned worship leader heard "Facebook"? "I don't know if Tim Hughes has heard it. I genuinely am Facebook friends with him (or at least one of the five or so Tim Hughes accounts on Facebook) but I doubt he knows who I am! I quite like the tacit suggestion in the song that Tim Hughes is more famous than the Queen!"

Over the years SOS have had several changes of personnel. Their current lineup is Michael Whiteman (guitar/vocals), Hannah Kernthaler (nee Wilson) (saxohpone/vocals), Andy Edwards (trumpet/vocals), Peter Kernthaler (trumpet/trombone/vocals), Thomas "Thos" Clague (bass/vocals) and Lekai Lee (drums). The group have played at numerous fests including Firm Foundations, Breakout, Grace Festival and Creation Fest. But it's their performances at Greenbelt which stay most vividly in Michael's mind. "I remember being blown away by the crowd response at some of the early Greenbelt shows. We played in a marquee called the YMCA Global Cafe quite near the Mainstage arena and it was just heaving. There were even people standing around the outside of the tent all skanking and singing with us. It was the first time we'd ever had a response like that. People tend to be a lot less reserved when they're part of a bigger crowd I think, and it was great to see them lose their inhibitions and party down in worship with us. I think we had complaints from the Mainstage that year because we were too loud!

"I've also loved some of the gigs we've done for really small local churches. We did one in a village in Yorkshire once, the name of which escapes me, and all the villages from miles around came on down and had a great time. We're often quite anxious when we play in more traditional churches that we won't be very popular, or 'too loud,' but I distinctly remember people in their 80s skanking in the aisles. Inspiring!"

A snapshot of their high energy on stage performances is released on 29th February as a free download album. 'Nuking The Fridge Live' features 14 songs from 'Like It Is', 'S'ka Gje' and 'Nuking The Fridge' and incorporates some delightful ska renditions of well known worship songs. Said Michael, "We wanted to give something back to all the people who have attended a live show over the years and is available for free via Bandcamp (http://soundsofsalvation.bandcamp.com/). There's also an opportunity to contribute to our costs of recording our next studio album."

Work on that project has already begun at Broadwater Studio, the Exeter-based facility run by Dez Minto. The one-time Yfriday man is very enthusiastic about the way the project is developing. He enthused, "After my deliberate year's break from Christian music, what a perfect was to come back by working with the SOS guys! Great hooks, massive dynamic and a unique, unpredictable lyric often far removed from the standard we've all become used to. A real raw burst of energy that the UK and Europe are going to love."

Added Michael, "Working with Dez has been brilliant. It's great to get his perspective on the songs and he has a real attention to detail that is sometimes hard to have from inside the band. He's really got the best out of us. We want to do one more weekend later this year to finish the album and hopefully have it out in the spring of 2013."

Cross Rhythms concluded its interview by asking Michael about his hopes and dreams for the future. "We would love to finish this album with Dez and for it to be the best thing yet. We would love to get some help with distributing and promoting the new album. We'd love to do gigs in mainland Europe (we've got a couple of potential dates this summer) and play to new people we've not met before. We'd love to play with Five Iron Frenzy, who are a great inspiration to us. But most of all we'd love for God to continue to use us to do his work and to meet with people."

For more on SOS visit the SOS artist profile