A string of hits with Classix Nouveaux; a classic 'religious' single "San Damiano"; but then SAL SOLO retired from music. Mike Fearon found out why he left... and why he's come back. 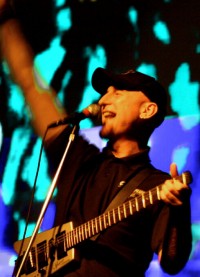 "Okay buddy," I say to the distinguished looking gent sitting opposite. "Spill the beans! Is Sal Solo your real name?"

"I was last asked that question two evenings ago by a very posh lady at the Christian Broadcasters Conference, and I gave my standard answer, which is 'Yes, I paid Â£46 for it, so it's much more real to me than any other name!'" he laughs.

Sal Solo was born under an assumed name at the same age as everyone else - at Hatfield, Hertfordshire, in 1954. Unlike most people, his father was the ripe old age of 67 at the time, and died when Sal was 18. He was not a happy child.

Sal believes that his upbringing has not only affected his music, but also his entire outlook on life. The unfortunate things happened, he believes, in order to facilitate the nicer things which came later. The young Sal was an extremely unlikely sort of person to have a hit single with a song about a place of Catholic pilgrimage, or to record songs about the Virgin Mary, such was the negative image he had about His own mother. Saying God is his father should have appealed to him even less. His story is that of a miraculous God who is able to turn these things around.

Sal has affectionate memories of the first five years of his education, but his secondary school was transformed overnight into a massive comprehensive. It was neither very Christian nor very good.

"From the age of 12 I decided my career was going to be in pop music, so the only subjects I bothered with were English, Art and Music, but they were irrelevant anyway. Teachers used to say that I needed something to fall back on, but I didn't consider that I needed that safeguard. As a fifteen-year old I thought I had bags of talent; but now I believe a lot of luck is involved, too, in the pop business. Looking back, I think God had a hand in it."

After his dad tried to put a downer on his music career, Sal acquired his first guitar and took his first guitar lessons. Boring stories from his guitar teacher about jazz chords, and the teacher's own tedious career soon drew those formal lessons to a close. But some of the other guitar pupils made up Sal's first band - it took them a couple of years to find a drummer.

After his father's death, he and his band moved to London, in the early 1970s. Artistic integrity meant that he always refused to perform 'cover versions', even though by his own admission his own songs were total rubbish at the time!

The wide-eyed would-be rock star took demo tapes around record companies, though time after time he would either not be given an appointment, or be allowed to play only a few bars before being told 'I don't hear a hit single there.'

"I had three or four managers. The first had a shady greengrocer's shop somewhere in the East End, and he wanted me to sign a contract at a docklands pub when the docklands was not at all salubrious. The second was half French and half Persian, having an affair with the wife of some shipping tycoon twenty years older than himself! I suspect we were indirectly living off her money... "As he had a load of dosh to play about with, and very little idea of what people really do in the music business - I think he wanted to be a manager for the pose - he shipped us down to the hairdresser to have our image sorted out. The hairdresser was unaware that, when one fashions an image for a band, it's done for the whole band. You don't manufacture a different image for each member of the band - which is what she did!

"One was bleached, one had a perm, and when I sat down she said, 'I know what will suit you: The Kojac look. All off!' When I refused, she tried the other extreme, a wig with curls down to my shoulders. It was so uncomfortable even when I wore it about the house for a few days to see. if I would get used to it! - then I went back and said, I'll have the Kojac look.'

"She trimmed my hair short, I went home and shaved off the rest, looked in the mirror and thought I'd become a space monster! I thought I'd made a total fool of myself, until some friends came round and said 'That really suits you.' From then on, I've never had any desire to appear in any different way. If you can't be pretty, at least you can be noticed."

In the early days of Classix Nouveaux, people would occasionally emulate his lack of hair. Sal turned up to an early gig at the Marquee Club to discover two of his roadies had shaved their heads. At one concert in Bangkok, the promoter gave away free tickets to anyone who showed up with a bald head!

"Punk had just started, but the head of GTO Records for whom I was still nominally signed with one of my early bands, The News was very down on it. I contacted two or three managers who had hot bands of the time. I didn't get far with Suoxsie And The Banshees manager, but the X-Ray Specs manager took us on for a bit."

Damn you, Nick Beggs! It's your fault we lost Sal Solo of Classix Nouveaux ;-)

I am looking to contact my Great Uncle Charlie Smith. His father was my Great Grandad . Any news would be appreciated. Thank you