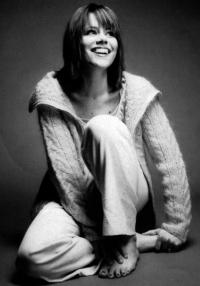 How did you start songwriting?

Sara: I had been writing music all those years in college but hadn't matured in it. I've always written from a therapeutic place so a lot of the songs were really just long and rambling and exploring emotions. It certainly wasn't palatable for a larger audience. Then I started doing it more as a hobby and a craft and really enjoyed that. My father-in-law and my husband were the ones who said (my music) is for other people. They said, "When you sing in church it ministers. let's make an album." To me that was a very big deal because it was putting myself out there and acting like I wanted to do this. I never wanted to actually admit to someone that I wanted to do it. God just had to speak to me and say, 'False humility is worse than pride.' Every time someone gave me a compliment, my "Aw shucks' routine was not any more holy than just saying, 'Thank you. God gives good gifts."

Clearly some of the songs on 'The Other Side Of Something' have come out of struggles with God.

Sara: I had grown up thinking, "If you do THESE things, then God will bless you THIS way." And I was finding out through all these godly people in my life who were following the Lord and doing these things - A, B, C - that hard things were still happening to them. I don't know if this is the case with every new mum, but, for me, I started becoming "mama bear" and really was on the defence against the Lord. I said, "I want to know what I can land on because this son is my most precious possession. What are you going to do with him?" And I went to the Bible to find, "You will always be safe." That's what I thought I wanted. I wanted safety and I wanted assurances that I would always be comfortable. Instead, I found Jonah running from God, Job scratching himself with a piece of clay and men plotting to kill Jeremiah, David, Paul, Peter - all of God's own - strung out, hurt, beat up, messed up and I got so. I was hurt.

And how did those struggles begin to resolve themselves?

Sara: I was sitting up in front of the bus talking with our new driver, Dick. He was a total (Ned) Flanders guy. ("God is good all the time.") And I was not in that place at all. My attitude was so rotten. I said, "Tell me your testimony." He told me his only son had been shot by a friend goofing around with a shotgun. He was 16 years old and Dick lost him. In the wake of their grief, he and his wife heard about a ministry to adopt terminally ill children from Russia. With everyone saying, "You're crazy. You're in the middle of grieving. Why are you doing this?" they began adopting these children and either nursing them back to health or. One of these boys died in their home.

So I'm talking to him in the middle of this season in his life. It was so interesting and it moved me, but I didn't quite "get it." I went back to my bunk and was about to fall asleep when I felt the Lord just whisper in my spirit, "Go up front and tell Dick, 'The second family doesn't cut it.' I had said this months earlier about Job. The Lord was listening to me and I just bawled. just fell to pieces because Dick and Job know something about grief and about gratitude that I will never understand.

Great stuff, Sara. The hurting stuff is where its at.

Birthplace of Sara is Springfield, Missouri I believe and not Montana.