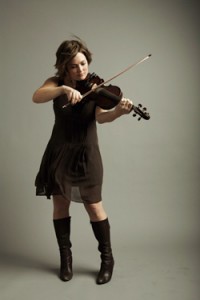 American music, or at least American music made by Christians, isn't renowned for its subtle understatement and deft application of the less-is-more principle. Yet the release of Sara Watkins' self-titled album has brought forth accolades from the reviewers, many of which comment on the album's subtle understatement. Mojo magazine commented, "Simplicity is the key resulting in such wispy wonders as 'Same Mistakes', the most fragile of waltzes or the most joyous chunk of 'Ye Olde Western Swing' that is Jimmie Rodgers' 'Any Old Time'," while the BBC praised "an understated approach with no hints of showy grandstanding or cheap shot appeal, Watkins' time in the spotlight is a triumph with her agile playing and the kind of voice that gives your goosebumps the shivers."

Watkins is of course no newcomer. With her elder brother Sean she has been a member of the "progressive bluegrass" group Nickel Creek which seemed to come from nowhere and sell massive amounts of their five studio releases before going on an extended sabbatical. The 'Sara Watkins' solo debut was produced by Led Zeppelin survivor John Paul Jones, making more than one critic ponder whether there had been a conscious attempt to repeat the formula and therefore the huge sales success when Led Zeppelin's Robert Plant teamed up with another vastly talented country music singer and fiddle player, Alison Krauss. Sara explained to Christianity Today how the unlikely musical marriage of Watkins and Jones came together. "Sean [Watkins], Chris [Thiele] and I [the three members of Nickel Creek] had made a record with Glen Phillips [of Toad The Wet Sprocket] years before [called 'The Mutual Admiration Society']. We decided to tour it a couple weeks and John played bass, which was a huge surprise and a really good time. A few years later he saw Nickel Creek play and talked to me about producing my record. I was surprised and stoked - and a little doubtful it would actually happen. A few months down the line we were still talking about it and realised we were both really into the idea."

Sara told LAist.com what it was like working with John Paul Jones. "He was unlike any producer I'd ever worked with and I enjoyed every second of the process! He wanted everything to revolve around the songs and my voice, and he helped me perform better. This was also a totally different process and production style for me, where you're bringing in all these musicians rather than the band being the musicians. I was actually surprised by how naturally everything went down. We just loaded in the first day - a friend brought a ton of instruments for us to play with, such as extra little keyboards and guitars and toys - and we were off and running. It just felt like we hit a rhythm really fast.

"There were a couple things that happened that we didn't really plan for. For instance, there was a rhythm section that we had intended on using on the second track, 'Long Hot Summer Days', but at the last minute they couldn't make it. So we had to figure out who else could play drums, bass and electric guitar. We had Gillian Welch and Dave Rawlings playing on 'Lord Won't You Help Me' where she played drums and he played electric, and so we just thought, what if John played bass, and then we switched things around on this one so that Dave played drums and Gillian played electric guitar? It ended up being one of my favourite tracks on the record because it wasn't strategised that way from the beginning."

The kickoff track, "All This Time", has an achingly tender lyric, sung in what one reviewer called "a sense of hopeful melancholy." She told LAist.com about her songwriting process: "When I first started writing, it was all very cryptic - analogy after analogy - and it didn't really convey anything specific. I'd run lyrics by a few friends and they'd tell me, "That's awesome, but I have no idea what you're talking about!" Over the years, I've been trying to be more specific and clear about what I'm saying - to a degree. I want to be able to extend an idea over several verses, but not be so clear that you get it all out in two verses and a chorus."

Amazingly, Sara does much of her songwriting on a ukulele. "I wrote most of the original songs on the album on ukulele, though I did write 'All This Time' on fiddle as I was plucking out this descending chord pattern. And I did 'Bygones' on the fiddle as well. One thing that's nice about the ukulele is that it's less intimidating. It's kind of a fun little toy to just sit around in a corner and noodle with. I happen upon different little chord structures or groupings that I wouldn't necessarily come across on guitar, so it kind of puts me in a different space."

Sara Ullrika Watkins was born on 8th June 1981. Sara grew up in a Christian home. She said, "At different stages I remember realising different levels of what [being a Christian] means. You ask God in your heart when you're four. Then you do it again when you're eight because somebody tells you, 'You better be sure or else you're going to Hell.' As you learn more about life, I think you learn more about your reliance on God. I feel like every four years or so I come to a place where it's so impressed on me, a bigger realisation kind of hits me."

Nickel Creek was formed in 1989, consisting of Sara, then aged only eight, her elder brother, guitarist Sean, and singer/mandolin player Chris Thile. By the time she was 12 she was noticing that Nickel Creek's plaintive rural music was attracting big name admirers. She told journalist Courtney Devores, "We were playing the children's tent at the Telluride Festival. Somebody got us on the main stage to play for 20 minutes." It wasn't long before the band noticed familiar faces like Bela Fleck and Edgar Myer in the crowd. She continued, "It was the first time I remember looking down and thinking 'the famous people are here.' We played right before John Hartford, and I'm sure they were there to watch (him)."

After the early releases 'Little Cow Poke' (1993) and 'Here To There' (1997) Nickel Creek were signed to major label Sugar Hill/Warners and with the US showing renewed interest in its folk, country and bluegrass heritage Nickel Creek enjoyed phenomenal success and the albums 'Nickel Creek' (2000), 'This Side' (2002) and 'Why Should The Fire Die?' (2005). After the release of the 2006 compilation 'Reasons Why: The Very Best Of Nickel Creek' the band decided to go on a lengthy sabbatical to pursue other projects. In 2007 Watkins and musician Grant-Lee Phillips wrote a song, "Song Of The North (Beneath The Sun)", for the documentary film Arctic Tale and also sang on the soundtrack alongside Aimee Mann and Brian Wilson. Her one-time Nickel Creek bandmates were developing new projects as well. Chris Thile collaborated with Edgar Myer and started progressive string band Punch Brothers while Sean Watkins formed Fiction Family with Switchfoot singer Jon Foreman.

In August 2008 Sara married Todd Cooper in her parents' back yard in Vista, California. Speaking about her husband, Sara told Christianity Today, "He's my biggest teammate on the solo thing. I'm very grateful for that. Touring when you're in a relationship always sucks. Your personal life, your home life, is always suffering when you're not there. It's hard to live both at home and on the road over the phone. After a couple of weeks you start to detach a little bit mentally. So you just have to figure out how to do it. And we're still doing that."

Also that year Sara performed short tours as an opening act for singer/songwriter Tift Merritt and, in October, Donavan Frankenreiter. Now she's out headlining Sara is finding the experience totally different from playing a Nickel Creek concert. She said, "I've only been doing the headlining tour for a few weeks now and it's totally different figuring out the set list and everything. Each crowd is totally different, so there's a whole lot of catering to each show. It's all very unique night to night. But by and large, the shows have been super-fun and by the end of the night it feels like we're all experiencing this thing together. It's been a really great learning experience."

Not only is the 'Sara Watkins' album in all the big mainstream stores, it's also, to many people's surprise, been picked up for Christian retail distribution. Commented Sara, "It's funny to me that Christian bookstores would want it. I'm totally comfortable with it. I was just surprised. I never thought that was an option for me. I like it. I try to stay as aware of my faith when I'm touring as when I'm at home. At home it's more consistent and you can figure things out a bit easier. You try being aware of your faith at all times."