Sarah Kelly: Freed From Self Harm and Physical Abuse 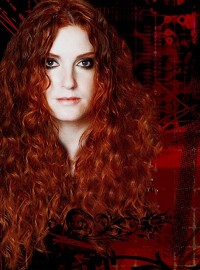 Stylistically she's been compared to Sheryl Crowe and Janis Joplin. But the music and ministry of Sarah Kelly goes much, much deeper than the output of those luminaries. As far as Cross Rhythms is concerned, the Sarah Kelly album 'Take Me Away' is a stone classic. Five songs from it - "Take Me Away", "Living Hallelujah", "Please Forgive Me", "Faithful Father" and "Matter Of Time" - were chosen for airplay and her stunningly emotive voice and full-on rock accompaniments have made her one of the most arresting artists ever to emerge from the over-safe world of CCM. Now with her album 'When The Past Meets Today' this rock chick English teacher born in Rockford, Illinois is at last getting the attention from US Christian radio her enormous talent deserves. On the album Sarah is joined by an all-star group of mainstream musicians including three legends of rock guitar Jeff Beck, Slash (Guns N' Roses) and Dave Amato (REO Speedwagon). But it was the healing message of the songs on 'When The Past Meets Today' and Sarah's early years of pain and abuse which has inspired so much of her music that was the talking point when Jon Bellamy interviewed Sarah recently on Cross Rhythms Radio.

She told him, "'Take Me Away' was just me worshipping God and screaming out to him when I didn't understand what was going on around me, choosing to trust him, even when maybe I had thoughts to be mad at him! You can either choose to be upset with God or you can choose to trust him through it. I think anybody understands that. You can choose to get bitter in life or you can choose to keep your head up and choose to believe there's something more out there for you. 'Take Me Away'" is just me releasing my faith in the centre of a circumstance, an abusive situation. I was in a physically abusive relationship. I didn't know what to do and when I wrote those songs, when you listen to them on the album it's like 'when I am with you the whole world disappears, I have no fear.' It talks about fear a lot. It's screaming out, you can hear like you said, a butterfly in a whirlwind. This girl is just screaming out to God, not understanding something. You can definitely pick that up. I finally got through those situations. I'm finally through, out the other side of it. I'm finally abuse free - that makes it sound like a drug but I am abuse free for a whole year now. And that's the first time now since I was 13 years old that I haven't been in a physical, abusive situation."

Sarah was asked whether it was hard to take the step where she was honest with herself and seek healing from God. "Yeah, it was the hardest thing I have done in my entire life but the most rewarding thing I have ever done! I have life in my eyes again! I have new creativity, I've honesty. I don't like to be weird about Scripture or anything but 'the truth will set you free', it does! It totally does! I hated myself from an early age. I started cutting myself and dating these older guys who would mistreat me. To be honest with you it all started with these girls who were mean to me in junior high, 7th and 8th grade. Every girl can relate to that, you know. It's just a brutal time to be a girl or a boy probably. Some people choose to get their insecurity under control and some people don't. I didn't. I always say abuse is just the drug for the addiction of self-hate and it's just like pornography or drugs or any other addiction you become dependent on. It's like something's not right when it isn't there. You have to find your way out of it just like any other pattern you want to drop. In order for me to drop it I really had to come to this bottom. I had to come to a place where it was either drawing this line or suicide. I finally let God in that room in my heart and finally experienced peace for the very first time."

One of the songs on 'When The Past Meets Today' was the direct result of an extraordinary experience of God at a mainstream festival. Sarah recounted, "I was at Atlanta Fest, a totally mainstream gig, not a Christian thing or anything, it's just singing your songs to a bunch of people who want to hear some music. I'm singing a bunch of my songs mid-day. I'm not a headliner yet, I'm the new act on the block! So I'm singing to 1500, maybe 2000 people. And it was amazing, absolutely amazing. So I pulled out my journal and I told the guys in the band and they kind of looked at me funny like, 'Oh my gosh, what is she doing?' and I said, 'I'm gonna sing you a new song and I'm gonna take a risk here.' I was just starting to deal with this abuse stuff and I said, 'Listen, I have come from a past that had abuse in it,' I didn't get specific at all. I just said, 'I want to sing you a song which I wrote last night,' and then I played this song called 'Out Of Reach' where it was me physically drawing a line and saying, 'I am going to choose to do what I need to do to get this out of my life and actually live. I want to live. I only get one life and I want to live it.' It was a moment that I really let God come in and take that room. I had withheld it from him for a long time, a long time. I sobbed at my piano when I wrote it. 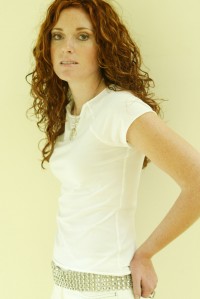 "Anyway, I shared this with the audience and at the end of it I was just wondering if there was anybody who related to the song at all, at any level and I just wanted to give them the words out of my journal. That's how fresh the song was, I had to rip it out of my journal. My motto is if you can't remember it, it isn't good enough so like for me to actually do that is so out of character. I pulled the words out of my journal and about 40 really sharp, cool college students, not like, you know, those sort of needy people. These were sharp, cool individuals and they were experiencing something very close to what I had experienced. They were sobbing at the front of this mainstream gig. Everybody is watching. You can hear a pin drop, nobody's moving. No one's getting restless, no one knows what to do. My guitar player just started playing 'Here I Am To Worship'. He didn't know what to do. We couldn't just go onto the next song. I didn't have enough words in my journal first of all for all these people and I'm going, 'What am I going to do?' All of us just staring at each other. We didn't play another song in that set. But there was no wrestling in the crowds, no one leaving, getting bored. I just went to each person and prayed with them if they allowed me to and hugged them if they wouldn't. There were, like I said, about 30 sharp college individuals both male and female.

"You know the thing that you have to understand about addiction and abuse. One out of four women have experienced physical abuse in their lifetime and one out of three women will have experienced rape. So what you have to understand is, this is a much larger demographic than is talked about, especially in organised religion. It's a can of worms. But abuse is no way to live. Somebody's got to speak out about it. I don't know why I don't mind looking like an idiot but I am talking and singing about it. I just hope I can take the journey with a few people."

Thank you for actually DISCUSSING very real issues that so many people face (particularly women). it can be so hard to get the support from the church when you're doing this to yourself, or you have had things done to you. But when i heard you on the radio, it gave me hope that our (those of us who are dealing with it) voices are being heard in the Christian world. God bless you, sister-in-Jesus.

hi sarah
continue to be the light and salt for the people around you. if a food lacks in salt, it lacks taste, it lacks meaning. u have put meaning into the lives of many around you, as Jesus has commanded us to do. i m proud to be your brother in the Lord
robin

but how do you know it's god that worked with you.. some people might say it's a state of mind and when you believe it makes you think there's someone helping because there's no one on earth who helps them so they go to some one they cant see..? i completely understand and admire all you wrote there and i can relate. i am actually thinking of buying the album, but still.. how can you 'live' with someone who's not there?

you have stood n witnessed for the ALMIGHTY GOD n he will take the rest for u.

keep it up sarah, never to LOok bac.

reading your words made floods of tears flow from my eyes.

Sarah , i am going to get your cd as soon as i get paid on tuesday ! I have just read all that and i want to say welldone awesome child of God .. God loves you and will never let you go .. I'm not sure if you have read the scars of life story but this deeply moved me .. its availiable all across the net but you can read it on here http://my.opera.com/layad/blog/show.dml/272385 .. remember god loves you and will not and has not ever let you go
love you sarah
love your sister in christ hannah xx

that is what ministering is all about! God uses the victories over pain and abuse to send us out to bring others to their victories. The enemy operates in darkness (ignorance) so the truth (light) is the only thing that can set you free. He is going to use you greatly Sarah!