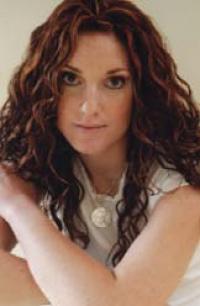 Mrs Kelly. That's who she'd be right now, if someone hadn't decided she should sing. Teaching you about Keats and Dickens and good grammar and proper sentence structure. She might have made you love the English language... or at least hate it a little less. But she would be there, in a classroom somewhere, lecturing, telling you to take your eyes off the clock, not slouch, and try.please, try not to use words that aren't words. Words like "funner" and "expecially." Sarah Kelly, a 27 year old singer/songwriter who grew up in Rockford, Illinois, and is now based in Nashville, Tennessee, has been signed to Gotee Records, where her 'Take Me Away' record label debut has created a considerable buzz. This is her story.

"When I first took the microphone, about five years ago," Kelly says, "it was literally because my pastor wouldn't give up. He really felt that I should lead worship for my college group. We had been singing [songs that I had written] for years in church, but I never sang." Finally, Sarah gave in, and is grateful that she did. But those first few performances were (my word, not her own) hellish.

"Before I would go on stage I would get so nervous," she says. "Sometimes I would even think, 'Why am I doing this to myself?' No one likes to look like an idiot." And in her mind - something that's difficult to believe now - she wasn't even sure that she was any good. Her performances made her feel as though she had "ruined something," or somehow needed to apologize. But most striking is this simple fact: "In my mind," she says, "I didn't know that I could sing."

Sarah Kelly saying something like that, you must understand, is like hearing that Tyra Banks thinks she's ugly, or that Stephen Hawking thinks he's dumb. It just doesn't seem plausible. The 20,000 people who bought Kelly's indie albums would tell you so, as would Gotee president Joey Elwood, who helped sign her. But so it was. And still, with all of that weighing on her mind and on her person, a desire for discipleship caused her to carry on. "I just knew that I was willing to look awkward if it would bring glory to Jesus," she says. "Then the craziest thing happened. I started to really enjoy it."

She now enjoys it so much that an English classroom may be the last place she wants to be. "You asked where would you be if it was up to me," she said earlier in an interview with cMusicWeb. "Well, I would be right here. I love what I am doing. I just never had the guts to dream this dream. One of my songs, 'Life Is,' says it best: 'I asked you for silver and you gave me gold.' I guess that I am living proof that God knows what we want so much better than we do."

Kelly laughs that the things that she was so insecure about in her early days are what her audiences now seem to love the most and says she wouldn't even consider walking away from performing if it were possible to become, exclusively, a studio musician. "If I [couldn't] see the faces and make memories with people it would become empty for me really quick," she says. "I love to tour, to meet people."

Another facet of touring that makes it so attractive to Kelly is the opportunity it gives her to nurture various worship groups at churches, colleges and elsewhere across the country. " I have a heart to see the body of Christ writing its own songs," she says. "I am 'Auntie Sarah' to 40 or so worship teams out there and my goal for them is that one out of four songs sung on a Sunday would be home-grown."

God may not have been calling her to be Mrs Kelly, Sarah realizes, but she still gets to teach. She has done so while out on the road with groups like the Paul Colman Trio and Jars Of Clay and says her lifestyle hasn't changed all that much since she signed her record deal. "I'll open for a couple of shows during the week, go to one of my churches in the area on Sunday and have a songwriting seminar with a college group, and visit a radio station on Mondays," she says. "The sizes of the crowds are changing, but not the schedule."

Neither, for the time being, is her sound. Kelly says 'Take Me Away', her debut effort for Gotee, is essentially the same album she made as an indie, but with a different mix. "I remember Toby [McKeehan, Gotee cofounder] saying, 'We don't want to change a thing... but do you want to add anything that you couldn't afford as an indie artist?'" For the most part, there wasn't.

At present, 'Take Me Away' is at most Christian bookstores. It has garnered her comparisons to Sheryl Crow, Norah Jones, Janis Joplin, Leigh Nash and a slew of others. The title track and first single has been playing on rock and AC radio and has been doing well. Kelly continues to tour in support of the album, likely becoming "Auntie Sarah" to dozens more. Life as Mrs. Kelly, it seems, couldn't have been any sweeter.

Sarah Kelly helped me get over a tough stage of my life! She is now my idol! I love her and thank her for what she has done for me! x x x

Sarah is the best in the world. I love her songs and she is a great inspration to me.

'A matter of Time' - an absolute 'must-have' - fresh, straightforward, 'throaty' rock. Simple, penetrating lyrics have brought me to cry out before God, and gave me the Hope that one day He will be able to say 'well-done!'