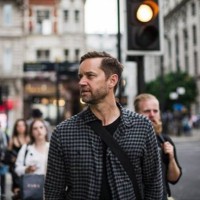 Through his annual appearances at Cornwall's well-established CreationFest, the worship ministry of California's Scott Cunningham has touched the lives of tens of thousands of British churchgoers so it is surprising that this most gifted of songwriters and bandleaders has made so few recordings. There will, no doubt, be plenty of Brits pleased to see his appearance, along with other Calvary Chapel worship leaders, on the recently released hymns project 'Monuments: Calvary Creative'. Before that project Scott's last appearance on CD was on the 2012 album 'Come Away' by the Scott Cunningham Band. Like many independent projects it didn't get the distribution needed to bring it to the attention of the international Church but it was a superlative effort which gained a Cross Rhythms 10 square review. 'Come Away' proved to be the first recordings by Scott's daughters, one of whom, Madison Cunningham, is now establishing herself as a solo singer/songwriter though still retaining her role in the Scott Cunningham Band. For his own part Scott still carries out a pivotal ministry role as director at the Calvary Chapel School of Worship in Costa Mesa, California. He spoke to me at this year's CreationFest.

Tony: It's been quite awhile since the 'Come Away' album.

Tony: Many of the tracks on 'Come Away' are strikingly long.

Scott: They are strikingly long! In fact, we had 15 and had to cut some of them off: the CD wouldn't fit 15. It's probably pretty rare if someone has the patience to listen to the project all the way through! But it was one of those times the Lord was just giving us so many songs and I just wanted to get as many of them as we could on the project. My daughters were travelling together, writing together, and it felt like documenting what God was doing in our lives.

Tony: What year did your daughters officially join the Scott Cunningham Band?

Scott: I think it probably would've been 2011/2012 as we were recording, writing, singing, playing together. Once we did the album it became more official they were part of the band.

Tony: What are you favourite tracks on the album?

Scott: My favourite tracks are my daughters' tracks for sure. I'm a little bit biased, but some of the songs they wrote were, to me, way beyond their years. I think of the song "There May Be Tears". My daughter Maddy was telling the story of different scenarios and how, even though you're going through a difficult time and there may be tears while you're waiting for an answer, the Lord is going to meet you there, and it's going to be all right. I have five daughters; my house has typically been filled with a lot of tears, having a lot of women in the house. It became a prophetic song for our house. That song, and a couple my daughter wrote, tend to be standouts for me.

Tony: Do you still spend a lot of time in California teaching?

Scott: Yeah, that's true - in fact, a huge part of my weekly ministry. We have the School of Worship, we train guys, we do a lot of teaching. It's a year course; 50 per cent of it is teaching the Bible, the other 50 per cent is theory, guitar, worship-team development and vocals. I get to teach a number of those classes, I oversee the school; we have a lot of great teachers. A lot of it is discipleship teaching, encouraging creativity, trying to document creativity. It's also leading worship at our church. Our church - Calvary Chapel, Costa Mesa - hosts a number of conferences: we're kind of like the mother church of our fellowship of churches in Southern California. Chuck Smith was the founding pastor. There's about a thousand Calvary Chapels in the US and about 500 overseas. We have a couple of conference centres that Chuck bought and built. We host those, so we do a lot of leading and facilitating for pastors and missions conferences.

Tony: Are there times when your band go out on the road and do concerts?

Scott: Yeah, we'll have certain weeks where we'll take road trips. We'll do an east coast trip, play a number of churches there. A lot of times we'll do little weekend trips and play different places. The last couple years I've done a little bit less, because of needing to have some stability and consistency in our body during a season of change. But it's been exciting to see God working even in the transition. Our pastor went to be with the Lord a couple years ago. He was finishing well - 86, I think - and he wanted to go to be with the Lord while he was preaching. That was his dream; he almost did. When he went to be with the Lord the church just sighed a relief he was in no more pain and suffering. He was struggling with cancer. He left a legacy of teaching the Word of God verse-by-verse. I think he taught through the Bible 10 times. He impacted my generation with just knowing the Word of God; we're very blessed to have that example. But a lot of new stuff is happening - new generation, new season, challenges.

Tony: Madison has now branched out on her own.