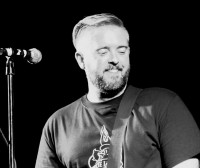 One of the most celebrated bands on the roster of Thumper Punk Records is the punk rockers from Idaho, False Idle. Their lead singer Sef Idle, otherwise known as Seth Stephan, recently surprised fans by releasing an acoustic EP. Cross Rhythms caught up with Sef and asked him a bunch of questions.

Tony: Your solo EP is called 'Start Again'. Doesn't that infer that False Idle is finished?

Sef: No, not at all. The 'Start Again' EP is a completely separate project. The title of the EP is a personal statement that is directed at myself as a person, not at my position as a musician, or as part of a band. False Idle is still going strong. We have been writing new music and plan to release a brand new split CD with our pals from A Common Goal, this Fall. We're still playing shows and practising just like we always have.

Tony: Why decide to record a solo project, and an acoustic one at that?

Sef: I got some new studio equipment this past winter that I had been wanting to tinker with. I had also been listening to music by punk musicians who had done solo projects, like Tony Sly, Joey Cape and Russ Rankin. I thought it would be fun to challenge myself to do something that was a little more out of my comfort zone than usual. Most of the music I write with bands that I have been in are usually written as if from some sort of third person perspective. I wanted to see what type of lyrical content I could come up with if I focused my writing to be very personal. Once it was all written and recorded, I was actually really nervous about putting it out for that very reason. I don't wear my heart on my sleeve very often.

Tony: I really like the song "In The Sand". How did you come to write that?

Sef: Simply put, that is a love song that I wrote to my wife. She has put up with my musical ambitions for a very long time, so it was something that I felt was long overdue.

Tony: What about "Big And Strong"? It seems pretty autobiographical.

Sef: It is. I have had the honour of having three specific examples of real men in my life. Both of my grandfathers and my Dad. All three of them were very different from each other, but all three taught me great lessons about life, and about what it meant to be a man. That song was an expression of that, with the addition of the hope that I am a good example to those who may look to me as an example, specifically to my own kids, and also to whoever else that may be.

Tony: There doesn't seem to be anything of a Christian nature to the lyrics of 'Start Again'. Why is that?

Sef: Isn't there? I'm not sure that I fully agree with that statement. It is true that there is no mention of a Saviour in any of the songs, there is no mention of God, or prayer, but I'm not sure that I would constitute the lack of those things as making something "not Christian". In fact, there are plenty of songs on the Top 40 charts that speak of, mention and even thank God for his blessings, only a line or two before or after glorifying countless things that would contradict what a song labelled as Christian should be about.

I will agree that there are no worship songs on the EP. What it is, though, is a compilation of songs written by a Christian about the life he leads, and a few of the things that he felt that he needed to write about. Does that make it a release with a Christian nature? I suppose that would be up to interpretation by each individual listener. In my opinion, it meets the criteria.

Tony: Tell me a bit about the 'California Or Bust' project. What led to the recording of that?

Sef: That was a False Idle project. It was never intended to be anything big. It was something fun that we do for the people who supported us going down to Southern California in 2013. We wanted to be able to give them something that we hadn't done before.

Tony: Will you be returning to loud rock music any time soon?

Tony: Tell me something about Thumper Punk Records.

Sef: Thumper Punk Records came along exactly when Thumper Punk Records needed to show up. There hadn't been a label that brought the kind of bands together like that since Screaming Giant left the scene 10 years prior. Christian punk was fading into oblivion and TPR came along and saved the day. TPR is the real deal, and they have my full support until the end.

Thanks, Peter. I appreciate that!