Sent By Ravens: The post-hardcore band guarding the words they speak 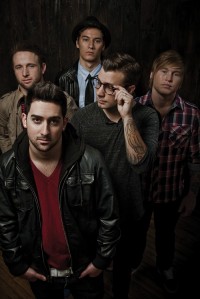 Christian Music Review Blog recently described the post-hardcore band from Hartsville, South Carolina, Sent By Ravens as "one of Tooth & Nail Records' most promising bands" and few would argue. Their T&N albums 'Our Graceful Words' (2010) and 'Mean What You Say' (2012) have both been critically received, the latter being eulogised as "a record that, frankly, few bands would ever conceive of making". Explained the band's lead singer Zach Riner, "The entire record is based on the weight in our words. The album concept was influenced by the actions of The Westboro Baptist Church. Groups like this are the ones you see picketing, holding signs which say 'God hates Fags' and the like. These groups use their words carelessly and distort truth."

On the song "Listen" Riner addresses the idea that transparency while on "Learn From The Night" he reminds the listener that we must let go of pride and admit our own mistakes if we want to find healing in relationships. He said, "I want to be true to what I believe. I'm fine if someone is offended or disagrees with me, but not if it was because I lacked compassion. I am no preacher, I only feel qualified to write songs and speak about what I believe and talk sincerely with people - that's what I'll stick with."

Sent By Ravens got their name from the biblical story of Elijah. Their current lineup is Zach Riner (vocals), Andy O'Neal (guitar), James "JJ" Leonard Jr (guitar), Jon Arena (bass, bvs) and Dane Andersen (drums). The band's original bass player Jamie Windham told indievisionmusic.com about the origins of SBR. "The band started in winter of 2006 with Zach, Andy and myself. We had always had problems with drummers, we could never seem to get a set lineup because we were always looking for a drummer. At the time we really hadn't put a lot of thought in having a second guitar player as well. But I decided to search Youtube for drummers who had put drum covers of them playing Underoath songs. Dane just happened to have a video up. I was going through them and checking out everyone who had videos up and sending messages to the ones I thought were good. I ended up messaging Dane and I found out he was from Hawaii. When I found out he was from Hawaii I thought there was surely no way he would be moving from Hawaii to South Carolina to play with us. The next day Dane called us and said he was very interested in the position and he wanted to talk with us more about it. Also, he told about his best friend JJ, who also plays guitar now. We were interested in the idea of having two guitar players. So JJ made some videos of him playing some original songs he had written and needless to say we were impressed. With in the next month we talked back and forth and both JJ and Dane bought on way tickets to South Carolina and moved. And here we are today going at it strong. I do have to say it was act of faith and God definitely had a plan for us from the beginning. Things like that just don't happen. It was definitely not coincidence."

After gigging around South Carolina the group released an independent EP, 'Sent By Ravens', on 12th March 2007, followed a year later by a second EP, 'The Effects Of Fashion And Prayer'. Said Windham, "We recorded our EP at The Sound Barn in Kinston, North Carolina. John Harrell runs the studio, doing all the producing and engineering himself. He is a great friend of ours who we know from the band he plays in, Belson. He is literally a genius when it comes to recording." In 2009 Sent By Ravens toured with Inhale Exhale, who were signed to Tooth & Nail/Solid State, the Seattle-based record label home of Underoath, Anberlin, Thousand Foot Krutch and dozens more. Explained Windham, "We had been in talks with Tooth & Nail around this time but nothing serious. It was on that tour that T&N sent out an A&R to see us play and after that that's when we start discussing a deal. T&N is awesome. Everyone is really awesome, from Brandon Ebel the owner to the art department to all the A&Rs. You can tell everyone in the T&N family is really tight. Which is great. Makes work a lot easier. They really believe in what we are doing."

The band's Tooth & Nail debut 'Our Graceful Words' was released in April 2010. Said Zach Riner, "The main theme - what I'm talking about the whole time is dealing with things in a loving way and being able to deal with some of these really hard life decisions in a way you feel that God would do with you. That's kind of the basis of what they're all about. There's a lot of different things about friends and people that I don't really want to mention. There's personal things in songs that are about them that I tried to have a hopeful outlook. How would God want me to deal with this person? Or how would I want this person to deal with me if I was in the same situation?. . . The way you deal with anybody - if you let anger rule what's going on, it's always gonna put you in a weird spot. There's always exceptions. Like the record, the things that I'm talking about are really hard life things that either I've dealt with or some of my close friends have dealt with. Had I been hard or had that person been harsh with me then it would have changed things a lot I think. One of the songs, "Stone Soup," is about harsh words that were for me but it stilled my heart like pursuing that. And I think that goes even one step deeper into that, is that even if they're harsh to you that doesn't mean you have to be the same way back."

One of the most popular songs on 'Our Graceful Words' was "New Fire". Explained Zach, "A friend of ours had some troubles when she was a little bit younger, this was four or five years ago. It's about the situation and it's about the things that I have dealt with in my past that were going on with her; and the ability to pray with her. It's all about that prayer that we had and about family." 'Our Graceful Words' sold well, making number 35 on Billboard's Heatseekers Chart.

On 28th February 2012 their second T&N album 'Mean What You Say' was released. Speaking to christianmusiczine.com Riner said about the album's challenging theme, "I think it's a side of us people haven't seen before. Lyrically, I have by no means lost faith in God. However, I think it deals with some harder questions and experiences. I felt piece in being able to share it. I'm really excited about 'Rebuild:Release'. That song is about the movie A Neverending Story. It was my favourite movie growing up. I just love the idea of completely rebuilding something from just a grain of what was left, by only being given a new name."

In the same interview Zach was asked how a band like Sent By Ravens could grow in the music scene without forsaking morals and maintaining relevancy. He said, "I guess that depends on your morals. Be real. Know who you are, love people. I have friends that won't play in bars. We do. Some people would question that. However, that's my point, that's not what's important. I'm not that concerned with what people think. I want to follow the peace from God and go where that takes me. The Church is more than the building you go to on Sunday morning. It's also with the people who don't love him in return. Doesn't he love us all the same?"

Zach is right. His music should only be focused on pleasing God, not humans.