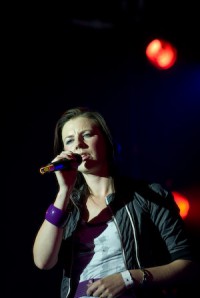 Warrington-born Shell Perris has over the years served the UK Church with an unrelenting energy. Emerging with the teen pop group tbc (long-time Cross Rhythms listeners will remember their radio hits of 2005 "Do You Know What It's Like" and "Backslider"), as a solo singer/songwriter Shell's musical style changed to take in elements of rock music but with enough poptastic savvy to have three of CR's catchiest radio hits with "The La La Song" (2007), "Barbie Girl" (2008) and "Don't Take Your Clothes Off" (2009). Shell also found time to write some books, including her autobiography Made To Be Me. But with the near collapse of the record company who were meant to be distributing her last album, the increasing demands on Shell's time as a speaker, presenting Cross Rhythms' much loved Girls Night In radio programme and caring for a still growing family (she and husband Tim will soon be welcoming their fourth son into the world), Shell's music had been put on hold. . . until this year.

In May Shell released the three-song EP 'Together We Are One'. And now the singer/songwriter has released an even more important project, a charity single with all the proceeds going to Compassion UK. Jonathan Bellamy spoke to her about the new single. She said, "It's absolutely amazing to be back into writing and recording again. About a month ago I released three new worship tracks on iTunes and Amazon and now I've got this new Christmas single out, 'How Much Longer'." 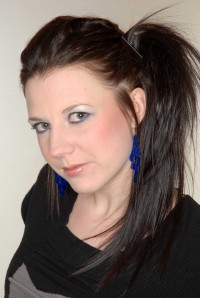 Shell explained how her relationship with Compassion UK developed. "Compassion UK is a charity that gets people to sponsor children in poverty so that they can be released from poverty in Jesus name. I've known about Compassion for years and have done some work with them in the past. But when we were at Creation Fest this year, my husband and i sponsored a little girl from Bolivia. We were chatting to the guys on the Compassion stand and, to cut a long story short, they asked me to become an ambassador for Compassion so that at future speaking engagements I could tell people about the amazing work they are doing. When Compassion spoke to me I was about to take some time off to go on maternity leave so at first I thought I'd have to wait before I could get into that. But then I remembered that a few years ago I'd written this song called 'How Much Longer' about the plight of children in poverty around the world and when were we going to do something about it. So I sent Compassion this really, really rough demo of the song and they absolutely loved it. It was decided we'd record it and release it in time for Christmas so we could raise some money to help these dear children."

Shell continued, "The verses talk about some of the different situations and horrible things - human trafficking, things like that the kids are in. And the chorus is really a challenge to people, when are we going to do something to help? Because all of us CAN do something to help. Tim and I are sponsoring this girl in Bolivia and we write to her and she writes to us. And it's absolutely amazing how our Â£25 a month is making such a huge difference to that girl's life. Some of these children have never heard of Christmas, never seen a Christmas tree, never had a present. Compassion UK have found a way to help more and more of these children and it's my hope that my single will play a part delivering more kids from poverty."

Great to see Shell sharing about Compassion - Ive been sponsoring a child a year now and its great to have the interaction with them through letters. I would strongly recommend anyone who wants to invest more in the Kingdom to sponsor a child through Compassion!