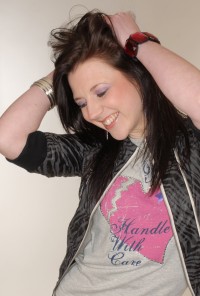 With a considerable amount of uncertainty gripping Christian retail at the moment, first with financial woes of STL/Wesley Owen/Authentic's followed by Authentic's sale to Kingsway Music, one rare bright spot has been the rise and rise of Warrington-based singer and author Shell Perris. Ever since she first emerged in 2004 with teen pop group tbc, Shell has built a growing support base amongst young Christians, particularly girls. Her debut album 'Made To Be Me' has sold steadily while her books have communicated spiritual truth to a teenage readership like few other items in the marketplace. On 21st November Shell launched her new album 'Beautiful Life' at The Foundry, Widnes and judging from the rapturous reception which greeted the effervescent singer/songwriter there is still an enthusiastic audience for spiritual pop rock songs that AREN'T intended for congregational worship. This year Shell will be touring extensively across the UK with her newly formed band. I caught up with the 25 year old Gospel communicator and pitched her some questions.

Tony: Looking back over your tbc days, what stands out in your mind?

Shell: It seems like a life time ago since I was bopping on stage with the other tbc ladies. I was a completely different person back then and when I look back I realise just how much God has done in my life since I left tbc. Being in the group was a great opportunity and a spiritual roller coaster ride but I think God has done more in my life since leaving tbc than when I was actually in it. In my days with the group I was young, naive and had a lot less life experience. Now, I'm definitely a lot more sure of who I am and of who God is. My trust in God has grown, my level of faith has increased, my relationship with God has deepened and God never ceases to amaze me!

Tony: 'Beautiful Life' is a big musical change of direction from your debut album. Why the move from pop princess to rock chick?

Shell: Writing and recording my first album was great and I worked with some talented people but I always felt there was something missing. It was my first solo album and was very heavily controlled by my record company. With 'Beautiful Life', Authentic gave me a lot more freedom and just told me to go and make it. I count that a massive privilege. They didn't hear the tracks until the final mixes landed on their desk and fortunately they loved it... good job really! I'm really proud of the final product because I have poured my heart and soul into it over the last 10 months. That's why I'm down as the executive producer! As I've grown up, my music has matured with me and has unleashed the rock chick that has lay dormant for so long! The pop princess was great for a time but I feel a lot more fulfilled now. I feel like I've finally found a style that suits me and I'm loving it!

Tony: Tell me about some of the material on 'Beautiful Life'.

Shell: The song that has caused the most reaction so far is "Don't Take Your Clothes Off". It's a song that tackles the whole issue of relationships and sexuality in a cheeky yet blunt way. As a Christian, I believe that sex is a precious gift from God and it should only happen with one special person that you're going to spend the rest of your life with. The only time that you can be 100% sure of that is when you're married. So many young people think that having sex is just a casual act that can happen any time, any where, with anyone. They don't always think about the physical, emotional and spiritual bonds that it creates. They just see it as 'a bit of fun'. "Don't Take Your Clothes Off" is a song with a message that will hopefully get young people in particular thinking about some of the choices they are making when it comes to having sex and encourage them to wait until they are married without being too judgmental.

Another song which is special to me is "Every Time I Fall", which is all about God's grace. In the Bible it says that we have ALL fallen short of God's standards... therefore we ALL need daily doses of God's grace. We all make mistakes and I know from personal experience that as we allow God's grace and truth to work in our lives and wipe the slate clean, we can find ourselves turning to God again without feeling guilty or ashamed.

"Beautiful Life" is the title track and has a really great life-giving message attached to it. I believe God wants us to be faithful stewards of the life that he has entrusted to us and that we need to make the most of the opportunities and situations that life throws our way. Too often we wish our lives away and miss out on the things that God has planned for us. Life will undoubtedly involve times when we haven't got a clue what's going on but we need to recognise in all circumstances that God has given us a "beautiful life" that is there to be lived... not to be wasted.

Tony: Dave Healey has done a great job of production for you. How did you get together with him? 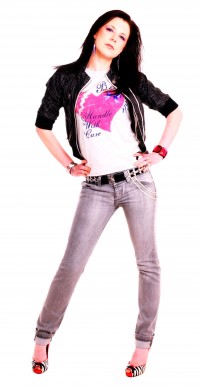 Shell: I actually first met him when I was about 15 because his wife was my music teacher at school! I recorded my very first demo CD with him when I was 16 and it was that demo CD that launched me on to this crazy adventure of music and ministry! We lost contact and didn't see each other for a few years and then he randomly got in contact with me again just as I was leaving TBC. We wrote "Where Is My Happy Ending?" together which got me a solo contract with Authentic Media and the rest is history! Dave and I have a fantastic working relationship and he always gets the best out of me. . . I wouldn't do another album without him!

Shell: I'm hoping to! Performing with a live band has always been a dream of mine and I loved every minute of it at the launch. Having a live band adds so much to every aspect of the show. The down side to it is that it costs a lot more to go on the road because there are five people to pay instead of one and the technical specification is a lot more complicated. However, we're working on different packages to try and cater to any and every event requirement.

Tony: As well as a singer of course, you are getting known as an author. Tell me about that part of your life.

Shell: My biggest writing achievement so far is my autobiography, Made To Be Me. In fact, I have literally just had a phone call from a friend of mine who told me that a girl who is in hospital with an eating disorder was given a copy of Made To Be Me last night and wants to give her life to God! How awesome is that?! I was diagnosed with an eating disorder when I was 15 and told I had eight weeks left to live. I found God, or should I say God found me, in the middle of my mess and changed my life in an extraordinary way. Made To Be Me is all about my personal struggle of having an eating disorder, meeting God in the midst of it all, and what he's done with my life since.

As well as Made To Be Me I've written the Something To Shout About Journal, a prayer journal aimed at girls. It's split into 52 sections, one for every week of the year, and talks about all kinds of different topics including, God's love, forgiveness, self-image, temptation, other religions, who made the world, church, etc. There is space at the end of every section for the reader to write down her own prayers, thoughts, feelings and questions.

Tony: Is writing as important to you as music?

Shell: That's a tricky question. Music is my biggest passion and means so much to me. I find it a great way to communicate with other people. However, with writing you can say so much more and go into a lot more detail. I feel incredibly blessed that I can use both music and writing to communicate the things that God has put on my heart to tell others.

Tony: You mentioned recently that God has given you a lot more confidence. In what ways is that coming through in your ministry?

Shell: Since turning 25 I really do feel that God has given me a new found confidence. I have started to realise how quickly life goes by. I'm a lot bolder when it comes to expressing my views and opinions. I'm more secure in who I am and the gifts that God has given me. I'm happy to give as good as I get, and I'm not as frightened of saying it how it is. That doesn't mean that things don't affect me or I don't have days when I think, what on earth am I doing? I just want to make the most of it all and live life to the full. There's no point shying away when God has called us to shine!

I LOVE! her song "nothingsganna stop the rain from fallign down" it's one of fav songs and i can't stop listening to it! i heard it on UCB and now i'm hooked!