Sister Wynona Carr: Gospel Roots - The composer of "Operator" and "The Ball Game" 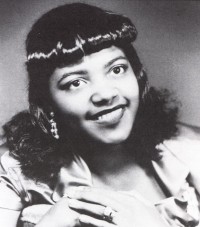 The sleevenote to her Ace/Specialty Records compilation 'Dragnet For Jesus' stated boldly that "Wynona Carr was a giant ahead of her time" while Bil Carpenter's Uncloudy Day: The Gospel Music Encyclopedia enthused "Wynona Carr was one of gospel's best modern gospel composers and performers of the 1950s." Yet despite her towering creativity this Cleveland-based singer and composer gained scant reward for her exceptional talents earning her just one gospel hit and, after she'd crossed over to R&B and pop, one rhythm and blues chart-maker, and died forgotten and unheralded. In 1975 smooth pop harmonisers Manhattan Transfer were using one of Wynona's compositions "Operator" as the closing song each week on their smash CBS TV show. But in less than a year Sister Wynona Carr died after a life time of music biz frustration.

The daughter of Beulah and Jesse Carr, Wynona Merceris Carr was born in Cleveland, Ohio on 23rd August 1924. Encouraged by her mother and stepfather, Arthur Summers, she began private piano lessons at age eight and, at 13, entered the Cleveland Music College where she studied voice, harmony and arranging. She soon was playing for Baptist churches in Cleveland and, at 20, began travelling to Detroit to direct a choir there. Around 1945 she formed her own five-member gospel group, the Carr Singers, with whom she occasionally toured the Midwest and South.

Central to the Cleveland gospel scene of the '40s was the nationally prominent Wings Over Jordan Choir. Although Carr was not formally a part of it, some of its members rehearsed at the Summers' house, according to her sister and only sibling, Jean Arthur Summers Mills. But Carr did sing with a Wings Over Jordan satellite group, the Wilson Jubilee Singers, and it was with them that she came to the attention of J W Alexander, leader of the Pilgrim Travelers, the star quartet of Art Rupe's newly founded Speciality label in Hollywood, California. Recalled Alexander, "We were performing on a programme in Cleveland and their group opened up. She was directing and soloing also. A lot of people likened her to Marion Anderson, with that deep contralto that was the thing that caught my attention. She had such a tremendous sound and she was a good performer. I didn't have much money - money was awful scarce in those days - but I used what little I had to go and make a demo on her and mailed it to Art."

Art Rupe was a Jewish atheist who almost by accident stumbled across the lucrative R&B and gospel music industry. With R&B sellers like Joe Liggins and Guitar Slim and gospel hitters like the Soul Stirrers Rupe's Specialty Records was to become a major source of early African American hits before in the mid '50s going on to enjoy rock 'n' roll smashes with Little Richard, Lloyd Price and Larry Williams. In 1949 Rupe brought Wynona Carr west and recorded the young, pretty singer's first session. Echoing the gospel/R&B big sales of Sister Rosetta Tharpe, Rupe recorded Carr with a jump blues combo led by pianist and LA studio stalwart Austin McCoy who gave the singer the same kind of swinging groove that the Sam Price Trio were helping Sister Rosetta Tharpe hit with. In an attempt to cash in on the similarity, Specialty duly released "Each Day" backed with "Lord Jesus" with Rupe affixing "Sister" to Carr's name.

As reported by Lee Hildebrand and Opal Nations in their sleevenote to the 'Dragnet For Jesus' compilation, Carr was distinctly unimpressed with her recording moniker. She wrote Rupe, "Gee whiz, why did I have to have a Sister Carr handle? I hate it. Mahalia doesn't have one. That sounds like I'm 90 years old. Must I have it?" Rupe quickly calmed her. "As soon as they see you," he wrote back, "they know that you are a very young and attractive woman. Besides, your voice sounds very young." The sobriquet stuck for the remainder of her gospel career.

Carr returned to the studio six months later, this time in Philadelphia. The session showed her ability to transform blues into gospel. "St James Infirmary" became "I'm A Pilgrim Traveler" while "I Heard The News (Jesus Is Coming Again)" was a Christian take on Roy Brown's and Wynonie Harris' 1948 smash "Good Rockin' Tonight". A guitarist named Harry W Polk contributed wonderfully inventive obbligatos and solos, sounding somewhat like Django Reinhardt one moment, Lonnie Johnson the next, and the pianist (probably Donald Thomas, Carr's accompanist at the time) demonstrated a deep knowledge of jazz, especially in his use of advanced chord substitutions behind her on "Our Father", a number she'd penned with J W Alexander following a programme in West Virginia. The jazz tinge of this Philadelphia session might have signalled a new musical direction for the singer had Rupe released any of its remarkable results, but he must have thought them too radical for the gospel market and thus kept them on the shelf.

Carr went back to California in March 1950 and cut a series of sessions over the next fur weeks, this time with more traditional piano (probably played by Carr herself), organ and drum backing. These included a number of powerful duets with Brother Joe May, Specialty's new gospel star, setting a precedent for such future male/female gospel pairings as The Consolers and Cleophus Robinson & Josephine James, right through to BeBe & CeCe Winans. Carr again recorded "Our Father", with revamped lyrics as a duet with May, but it too went unreleased; May's solo version on Specialty and the Five Blind Boys Of Mississippi's cover on Peacock were, however.

Carr had at first been highly optimistic about her future as a Specialty recording artist. "I know I'll be your biggest star because my faith and trust is in someone higher than any earthly one," she wrote Rupe on 3rd March, 1949. But her early Specialty records were apparently not big sellers for the company, at least in comparison to those by the Pilgrim Travelers and Joe May, and she found rocky conditions out on the gospel highway as she and her pianist travelled from programme to programme in her '48 Kaiser.

"They were not the most financially successful trips," recalled Loyd Palms, her accompanist during much of 1950. "We went to Buffalo for a well known disc jockey. The house was full and he told us he didn't have all our money. You ran into that, particularly if you were a woman on the road and there was nobody that would help give you some enforcement. I could readily understand why Mahalia Jackson was as hard on people as she was. She refused to sing until she got her money, but Wynona would go ahead."

Rupe tried to cheer her. "Let me tell you not to get discouraged by the way things have been going," he wrote on 22nd July 1950. "What has happened to you is merely the storm before the sun breaks through." Yet, even as he was waxing positive, he seemed to be losing interest in recording her, and it wouldn't be until April 1952 that he again had her in the studio. 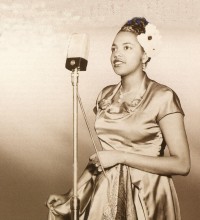 The 1952 Hollywood session produced her only genuine gospel hit, "The Ball Game", a brilliant tale of a sporting bout between Jesus and the Devil. It was then and has remained one of the strongest selling singles in the Specialty gospel catalogue. Carr's imagination as a songwriter continued to widen - she'd get ideas from newspaper headlines and sometimes wrote them down on the backs of napkins in restaurants - yet Rupe took another two years to get her back in the studio, this time in Detroit under the supervision of Johnny Vincent. Among the selections recorded there were "15 Rounds With Jesus", in which the contest shifted to a boxing ring, and a delightful gospel sendup of Dragnet, the popular TV cop show. Neither was released.

Carr was in Detroit during that period serving as choir director at Rev C L Franklin's New Bethel Baptist Church. It was with this dynamic choir that she recorded what is easily the most intensely emotional of all her sides, a quite different rendition of "Our Father" in which she worked melismatic wonders over the choir's hypnotic acapella chant. (Aretha, the minister's teenaged daughter, was no doubt sitting in the pews making mental notes.) It too went unissued, most likely because 10 seconds had somehow been erased from the middle of the tape! That flawed version was eventually released on the 'Dragnet For Jesus' compilation.

Although Rupe recorded Carr less often than she wished, he continued to ask her for new songs and she readily complied, recording dozens of demos at her parents' home where she stayed when in Cleveland. (She and Venice Music, Specialty's publishing arm, made more money off sheet music sales of her songs than from her records.) Carr spent part of 1954 touring with a trio led by two more famous gospel singers, sister Rosetta Tharpe and Marie Knight, each of whom had long been walking the thin line between spiritual and secular music. The trio often appeared in the white nightclubs, and Carr quickly realised what kind of money could be made on that side of the fence.

"I tried singing spirituals for 14 years," she stated in a letter to Rupe dated 27th January 1955, "when all the time my real thoughts were in the show world. . . I am not returning to church, but I would like to stay with you if you will allow me to record my kind of music. I don't want to and can't be a disgrace to my family by singing the lower class blues. I want to do and can do pops, jumps, ballads and semi-blues. . . I would like to be in the position where I could play all the clubs and not be limited to my own people." Clearly her time in the nightclubs had convinced Wynona that she needed a new image to go with her pitch at the secular market. On 4th February she wrote Rupe, "I've got some crazy gowns. Now I have to get some sexy (smile) pictures taken. . ."

Who were the backing vocalists on ding Dong daddy, till the well runs dry and other up tempo numbers

WOW! WHAT A WONDERFULLY TALENTED SINGER AND BEAUTIFUL LADY. Every since I started listening to her recordings last year, I wondered were her Music was all my life. My two favorites Operator,Operator and Baseball has encouraged me to fight this battle with Cancer and not give up. THANK U SO MUCH SISTER WYNONA CARR.

What a voice and a great composer, too bad she was way before her time.

A thoughtful, well-researched article on an underappreciated talent.