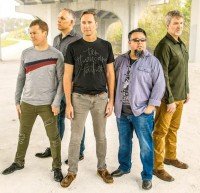 When in 1997 the Smalltown Poets, from Tifton, Georgia, released their debut album they could hardly have expected the big success that followed. 'The Smalltown Poets', on Ardent Records, went on to receive a Grammy nomination (Best Gospel Rock Album) and numerous Dove Awards. For the next few years they were fixtures on America's Christian music scene with their deft blend of pop, rock and folk elements, their clever and articulate songs and the distinctive tenor voice of lead singer Michael Johnston continuing to clock up the Christian radio hits.

But then things slowed down and although there were Christmas projects, the band - consisting of Michael Johnston (vocals, guitar), Kevin Breuner (guitar), Danny Stephens (keyboards), Miguel DeJesus (bass guitar) and Byron Goggin (drums) - seemed to be slipping off many music buffs' radar. So it was a major surprise when the veterans announced a new album, released in May, 'Say Hello'.

Grabbing a chance to speak to Danny Stephens, I began by asking why the band should have taken such a lengthy sabbatical. He responded, "It was really because everybody started having families, focussing on that versus travel and it was just time for us to take a break from the pace of touring. It was a good season, it was a long season, it was several years and even now we don't tour at the pace we used to back in the day when we were gone for weeks and months at a time."

The band have, of course, recorded a couple of Christmas projects - 'Smalltown Poets Christmas' in 2011 and 'Christmas Time Again' in 2014. Commented Danny, "The funny thing is, a lot of people got to the point where they considered us a Christmas band because for the last eight or nine years that's almost all we've done. We've done Christmas tours and we loved that but it's time to get back to some rock and roll and to our roots."

But, I suggested, there's more than rock music in the Smalltown Poets sound. Critics have had difficulty defining what that sound is. Is it rock? Is it pop? Is it folk? Is it Americana? Responded Danny, "What a great point, I have heard us described as Americana before. We have always tried to write in a way that feels timeless as opposed to getting stuck in just one genre. Some people have said alternative, but I would guess that the term that covers most of those genres would be pop rock but that makes it sound like we're doing a Justin Bieber song."

Much of the 'Say Hello' album was recorded in 2017 in Memphis, but it took a while to complete. Said Danny, "Over the course of the next 12 months we would all, or some of us, reconvene in cities like Portland, Oregon; Tampa, Florida; Atlanta, Georgia, where we're originally from. We were all over the place and these days a lot of it can be done online. In other words I would record some keyboard tracks here in my barn studio in Florida and I could send it to the guys and they could be dropped into the recording session digitally, so a lot of it was also done like that."

The wonders of file sharing meant that guitarist Kevin, who lives 3,000 miles away in Portland, Oregon, from Florida-based Danny could add some of his contributions from afar. I asked Danny whether Smalltown Poets will be touring 'Say Hello'. "Yeah, but not an extensive tour. We're doing dates on both coasts over the next several months. We do have a booking agent who is hammering out where exactly those dates are going to be. If you go to our website, I think it says, 'Check back soon, tour is being worked out'. I believe maybe the south-east and the north-west are where the tour dates are going to focus but not necessarily be limited to those parts of the country. Sadly, nothing international this year. It's been a while since we've been across the pond."

I asked Danny what is his favourite track on 'Say Hello'? "It's a bit of a departure for us but it is track number six, 'Impossible'."

Danny admitted that the 'Say Hello' title track is "a typical Smalltown Poets' song." He said, "If you just listen to the chorus you're like, 'hey man, this is about praising the Lord along with a great cloud of witnesses. What an encouraging. . .' And that's great and that's true but if you dig in deeper there are a tonne of references in this song because most of the lyrics throughout the song point to influences of ours. There are both album title references and actual lyrical references to the artists that influenced us as we were forming our band decades ago and as we were learning about music and learning about our faith so there are veiled references in those songs to Keith Green to Petra to White Heart to Russ Taff to Mylon LeFevre. And the list just goes on and on with all these Christian artists."

I told Danny I noticed the song "Our Story" namechecked some famous poets. "Yes, it references by name Wordsworth and Keats. We formed in our high school in a South Georgia town where me and the lead singer, when we each learned that the other played an instrument, would get together and write and play pool, and the song actually references that. We had this moment, you know it's so melodramatic with bands, there was this moment where we had to decide if we were going to go for it and do this as a real thing or if it was just going to be a hobby and we asked each other the question, 'Are you with me?' and that's the name of that song. It's about how we launched, and then we proceeded to tour for 10 years under various names with no recognition and no record sales and something finally turned. That's when we became Smalltown Poets and put out that first album back in 1997."

'Say Hello' features a guest appearance from Third Day's Mac Powell. I asked Danny how that came about. "The cool thing about Atlanta over the last two or three decades is all the Christian music that's come out of there. We just all came up together, playing gigs together. The first time I met Mac, I bet he was 17. He would come to our concerts and then eventually we both would be on the road together. It came to the point where we wouldn't see the Third Day guys in Atlanta because everybody was so busy, we'd see them in Seattle on the other side of the country and playing at all the same music festivals, so we've known Mac forever. The thing about that song is we wrote it together, me, Mac and Michael, a long time ago, at least 15 years ago, and nothing ever really happened with it. It just kinda sat there, so for this record I called up Mac and said, 'Man, we need to record this.' I'm really glad it came together."

I told Danny that for me the outstanding guest performance on the album came from two gospel singers who I'd never heard of before. So who are Eric and Ruby Montgomery? Responded Danny, "That's exactly the question I asked when our lead singer said, 'Hey, I've got someone to sing this song with us.' What happened was, I was working backstage at this event with some musicians, and Martin Luther King's daughter, Dr Bernice King, was speaking. I was so moved by not just her talk but her prayer that the next day, our lead singer Michael and I were on a trip together and we wrote this song. We had a song that needed lyrics so we dove in and wrote this song and then Michael came back later and said, 'I've got these friends Eric and Ruby.' Sometimes they go by Rick and Ruby. I had never heard of them, but they came into the studio and we had so much fun. They just nailed it, and CCM Magazine said that's their favourite song on this record. The only reason it's buried in the running order of the album is because, I don't know, something has to go near the end, and you just have to live with it."

Danny finished our chat by explaining why the Smalltown Poets have stepped back again into the challenge of recording and touring. "It's both a creative thing and also a communal thing because, while it sounds a little cheesy, it's true, we're like a family, and every time we get together on the road or in the studio it's like a family reunion, we need each other and we pour into each other's lives. There's a line from 'Are You With Me' that says, 'of all of our years together, who would have known we were learning to be fathers?' That's a huge part of the story for us, and you're right, there's not any pressure. Our old record label is so supportive of what we're doing that they put us in the studio for this project, and they footed studio expenses and didn't ask for one penny of it back. They're on board so we're not accountable to them to have to tour a certain amount to have to pay them back anything. It's really been incredible how this thing came together."

Great interview, great questions! Thanks for the article on Smalltown Poets!