Social Club Misfits: The rappers from Florida now with a major label deal 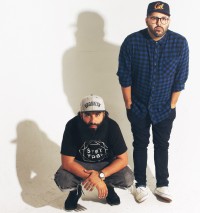 The Miami-based duo Social Club Misfits have recently broken into the Christian hip-hop bigtime with their signing to Capitol Christian Music Group. Their EP for that label 'The Misfit Generation' has pulled in enthusiastic reviews and clearly things are looking good for Fernando (F.E.R.N.) and Martin 'Marty' Santiago. When they formed in 2011 they were called Social Club and they kept that name through their string of independent releases, the free album 'Misfits' (2012) followed by 'Misfits'EP' (2013), 'Rejects' EP (2013), 'Summer Of George' (2013), 'Misfits 2' (2014) and 'Us' (2015). I spoke to F.E.R.N. and Marty about their music and ministry.

Tony: Why the new name?

Tony: "Misfits" is interesting because you're already set apart from other rap artists - not just the mainstream but from gospel rap too.

Tony: You've got some guests on 'The Misfit Generation'. Who are Tree Giants?

Marty: Tree Giants is a made up band. I'm just kidding. They're a pop group out of Alabama. They're two guys - pop sensations, brand new on the scene. They heard about us and they wanted to do something. We heard their voices and they sound like little angels, so we were like, "Let's do something with you."

Tony: What's the song "Wavemasters" about?

Marty: We feel like as misfits it's our job to set the trends, not to follow them. "The wave" is a phrase we've been using for years - it came from New York - it's basically what's happening now. There are always new waves coming; those are trends, so the "wave masters" means we're controlling the waves, we're setting a new trend, a new tone. We want to do that in every genre. A lot of people don't know how to classify us. "Are you Christian rappers? Are you rappers?" We say, "Listen, we do what we're doing, we're having fun, and we're here to reach misfits." Call it what you want: at the end of the day it's good music. We believe that's our job as Christians, misfits - whatever you are - to set the trend, not to follow, not to do what everyone else is doing. The trends where we live are very different - get a girl Friday night and never see her again after the morning. Drink until you pass out. Smoke this, do that. That's not the wave we're on: we're on a different wave. We have a song called "Marriage Goals"; that's totally opposite of whatever the world is saying. They're saying, "Get a girl, get a different girl, get a hotter girl. Make sure your girl's the hottest and does this the best." We're saying, "Listen, find somebody and stay committed. Have children. Build a life together." We have our own ways; instead of telling them what we're against, we're telling them what we're for. We're for family, we're for God, we're for setting a new trend.

Tony: Presumably you're married men yourselves?

Marty: Yeah. I just got married three weeks ago. Sex with my wife is the best thing ever. I waited so many years to have sex and now we're going at it, we're practising a lot.

F.E.R.N. The marriage bed is undefiled, so we feel real comfortable making those statements.

Tony: A lot of Christians have problems with sexuality.

F.E.R.N. We don't float in that realm: we just do what God called us to do. We like to make music for real life, to things we're really dealing with. I'm a married man myself and I was so happy to have Marty join on the quest of being married. We've always shared a lot of things together - we're on the same wavelength - but now him being married, it's just a different world. I know he's happy to be able to share in that now. Being married has changed a lot of things and put us on a different perspective as far as where we go in the future and how we see things. We want to point to the family unit: we know it's been breaking up. We want to make people know there's love in the family; we want people to get married, we want people to have kids. We have people get engaged at our shows. Five to six people have been married who were engaged at our shows; they've invited us to their weddings, they want us to perform at their celebrations. That's what we're pushing: excellence through marriage, through life - things that should be in different ways from what the world's been saying.

Mad props to these dudes... Too many people out here following the "mainstream." Jesus wasn't a conformist. His friends were misfits. I try to be that way. Actually, it comes naturally for me. I too, like to get through to the misfits of this world. I deal with it on the food and nutrition front. It's just what I was called to do, and I'm glad I found some music that pops, I can relate to and listen to, while I do my thing. Keep up the good work my dudes!