SoulBox: The latest in the proud tradition of Manchester musicianaries 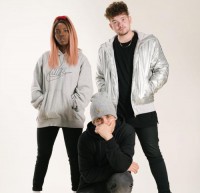 Manchester's youth evangelism ministry The Message Trust has a long and proud history of training and launching musicianaries to take the Gospel of Jesus into schools. From the fondly remembered early days of The World Wide Message Tribe, Shine, thebandwithnoname and tbc, to the current crop of musical communicators BrightLine, Amongst Wolves, Galactus Jack and Vital Signs, The Message Trust has been a key spiritual and creative force in the history of Britain's Christian music.

In 2017, The Trust launched SoulBox, then consisting of rappers Ben Davies and Jon Sewell, with an EP 'So Good'. It was so good with Cross Rhythms radio listeners, too, as three tracks - "Intoxication", "Discrepancy" and "So Good" - were chosen for the Cross Rhythms playlist. Now they're back with hundreds of gigs under their belts, a singer Sammy Jabangwe in tow, and a full-length album 'Your Love'. Clearly, it is time to catch up on the talented trio. Here's what they said to us.

Chris Mountford: I understand Ben is in Ibiza but tell me something about you two guys.

Sammy Jabangwe: "My name is Sammy and I'm originally from Zimbabwe, in Africa. I moved over to the UK when I was seven and I've lived in Manchester ever since. I'm a singer and really passionate about music. I'm one third of SoulBox."

Jon Sewell: "My name is Jon. I'm a singer and a rapper. I'm 25. That sounds old to me. I've been doing music for five or six years and I'm now part of SoulBox. Ben is 25 years old as well, and like me, he raps and does beatbox and spoken word."

Chris: What are the origins of SoulBox?

Jon: "SoulBox has been a band for two and a half years now - three in September. We started as just me and Ben. Sammy joined us about a year and a half ago. The Message Trust - which is a charity in Manchester - was looking for an evangelistic band that'll go round schools, do music and proclaim Jesus to people who wouldn't get a chance to hear about him otherwise. We got the name SoulBox. It's a really boring story. We took 'Soul' because I'm a soul singer, we took 'beatbox', and we put the two words together. We're so sophisticated. A year and a half ago the beautiful and amazing Sammy joined us, and we got a lot better."

Chris: How did you connect with The Message Trust?

Sammy: "I did The Message Academy, which is The Message's training gap year for people who are passionate about the Gospel, creative in any way, shape or form, and they just want to use their giftings to proclaim Jesus. I heard about Academy in 2016, and I did the gap year, learned so much, and I wanted to stick around, so they gave me an internship with SoulBox. It's just history since then."

Chris: Jon, tell me a bit about how you became a Christian.

Jon: "I became a Christian through The Message. Seven years ago I was involved in gang crime and drugs. My brother ran an Eden team, which is something The Message does where a group of people move onto an estate and show Jesus, be Jesus in that area - basically work in the hardest places for the hardest-to-reach people. I had an incredible encounter with God, stopped being involved in all that different kind of stuff, and then started working for Eden as a gangs worker, using the experiences I've had. I worked with the gangs there for three, four years. As a way to communicate the Gospel with those young men I started to rap. I realised I'd got a thing for this rap: I love it, and I feel like it's what God is calling me to do. I turned up to the Message one day. I got in a meeting with our boss, Tim Owen, who was part of the World Wide Message Tribe, and said, 'God's told me I'm going to move here in two weeks, I'm going to work for you, and I'm going to part of an evangelising band.' He just went, 'OK. It just so happens that there's a job going.' So I got a job doing SoulBox two weeks later."

Chris: Tell me about your first release, 'So Good'.

Jon: "Me and Ben got put in a studio, and they were like, 'What kind of music do you want to make?' We had to go through this process of creating music and figuring out what it was. 'So Good' was the first five songs that represented us as artists together, but also was a representation of the kind of stuff that we wanted to talk about, and we felt like young people wanted to hear about. The chorus is about feeling so good in your own skin, and knowing your identity in God. That was our first thing. Now we're a bit ashamed of some of the songs, but it did really well and we toured with it for a year."