SoulBox: The latest in the proud tradition of Manchester musicianaries

Chris: Can you describe a typical week for SoulBox?

Sammy: "It depends on which part of the year we're up to. We've just finished our massive tour of Yorkshire, being part of something called the Higher Tour. The Higher Tour specifically tours an entire area, and we go in a load of schools in that area and invite young people to the gigs that are happening at the weekend. During Yorkshire we saw 20-odd thousand young people, and we saw thousands of them respond to Jesus. It's super-exciting, it's incredible to see how hungry young people are to hear about God. So that's amazing. On the flip side of that, when things calm down and we're not on the road, we just love being creative in the space we're given here by The Message, just creating new music. What's happening with young people? What can we talk about, what can we tap into? We've got other stuff that we have to do, being in the office. It's exciting, but it's a mix of things."

Chris: Is there also a mix in terms of audiences and venues?

Sammy: "Definitely. There've been some other gigs. Since I've joined it's more like massive things. Within that there's a variety: sometimes you'll get smaller."

Jon: "We've had some good ones. When me and Ben first started SoulBox, we went to the scabbiest gigs - whatever gig we could get. We just wanted to perform and proclaim Jesus in front of people. Now it's different. In a couple of weeks we're performing at Urban Heroes, which is a big fundraising event. Last year we got around Â£300,000 raised. At that we'll be performing to people who are reasonably wealthy - middle-aged men and women involved in business. Then we'll be invited to some random place in a different country, we'll perform in front of a load of people who just want EDM music - grown men who just want to jump around. Then we'll be in a PRU unit with a load of young men and women who just stare at you and look like they want to punch you. But actually they enjoy it. We'll go into high schools. We'll see a wide array. High schools are the funny ones. Years seven and eight, they want to have a party. Once you get to year nine, 10, 11 they're so hard. Something we get that the majority of bands don't get is we kind of have to roll with the punches with every audience we get, because they're so diverse. It's very reactive, even though we're performing the same songs, how we perform."

Sammy: "You've got to know your audience." 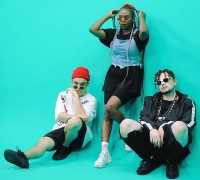 Jon: "I remember one time we were performing at Creation Fest, and for us that was a big deal because it was the biggest crowd we'd performed in front of. Two thousand people, and it was broadcast on God TV. As we were performing, the track just cut out. We were like, 'What on earth do we do?' Ben started beatboxing, I sang a little bit, and then it was silence. We both just kind of looked to the side and then walked off. It was one of the most embarrassing moments of my life."

Chris: Sammy, have you had any embarrassing moments so far?

Sammy: "Oh gosh, I've had many embarrassing moments. Obviously as a woman performing, it's really important to know that you've got to wear certain gear when you're jumping up and down on stage. I've definitely learnt. Even as a black woman, certain extensions and wigs, you just can't when you're jumping up and down. One time my wig nearly fell off. I was like, 'I can't wear wigs on stage.' So now I just braid my hair in every given moment. I've definitely learnt a lot."

Jon: "There was one time where we were performing, and I'd only just heard about this wig situation with Sammy. I'm a man and I'm just ignorant to hair. I went to pull her hat off to put it on my head and, honestly, I thought I was going to get punched."

Sammy: "I was not happy. He nearly pulled my wig off. On stage! Can you imagine?"

Chris: How has the music developed since you've joined?

Sammy: "We're all very different stylistically. When you get a female vocal joining in, Jon has to step down his falsetto and let me take some of the high range stuff. Jon has started singing more male parts, and now I can sing some of the female parts. From the first EP to the second album, it's a different tone from Jon. There's definitely a change in what I bring - a bit more soulful."