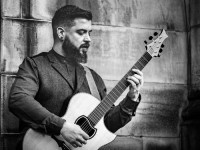 When Cross Rhythms reviewed the 'Gold' album by Edinburgh-based Steph Macleod, it received considerable accolades. Read the review, "This gathering of 10 home-grown tunes was inspired by Steph's own journey of restoration. Lyrically, it reveals him as a psalmist in the true biblical sense. Songs penned from a place of darkness, vulnerability and despair; Steph cries out to God for mercy. We see him revel in the grace lavished upon him, leading in turn to an outpouring of gratitude and praise. While naturally steeped in the blues, Steph effortlessly treads well outside such musical comfort zones and as with his previous CD, 'Kingdom Come', shows remarkable competence in a range of styles; from acoustic folk to electronica; from swinging gospel to Americana."

Steph explained how he came to write 'Gold'. "Well, I started writing 'Gold' about three years ago. I had to take some time off from music and - just life basically. I got really sick and ended up in hospital, and it was there that I was diagnosed with post-traumatic stress disorder. I've had it since I was 16 from violent trauma which I was a victim of and also some stuff that happened to me when I was homeless in 2005, but I didn't talk about it, I just kinda thought I could bury that stuff. As it turned out, that was the reason - one of the reasons anyway - that I self-medicated with alcohol and prescription medications, just to kinda use them as emotional painkillers. I went through 12 weeks of sort-of intense therapy I suppose is the best way to view it; CBT and stuff like that. I've never been able to express myself emotionally, I kind of learned it, you know, I buried them deep: it's quite a Scottish cultural thing for men to, you know, 'man up' I suppose. Feelings didn't really exist when I grew up, you know, and my therapist at the time in the hospital said 'Why don't you write about how you feel?' and I thought 'Okay, I'll give it a crack'. The first half of the album is basically about that journey and engaging emotionally after coming off the medication I'd been on for about 20 years. I was struggling spiritually because I was so wrapped up in myself, I mean I was praying and praying and I just didn't feel like there was any resolve, but it wasn't until I was able to come out of the other side of that process that I was able to understand that I needed to go through that emotional pain to realise that it wasn't gonna actually hurt me, and it was part of my nature to know what it's like to grow outside my comfort zone. Basically the whole album is about still being precious in your brokenness because life goes on, people are still precious and they don't lose any value when they're broken, you know. And that's basically what the album's about."

During the depths of his mental struggle, it was particularly difficult for the songsmith to attend church. He admitted, "I knew God loved me - I know God loves me, but the trouble is I didn't agree with him at the time, which really kinda separated my spirit away, and I only really went to church to appease my wife, and I was judging everybody there doing all their thinking for them, thinking that they were all thinking about me because I've got nothing better to do on a Sunday. It was just fully resentment, it was all mirrors, it was all basically how I felt about myself because every time I looked in the mirror I just had nothing good to think about myself. I was so wrapped up in my shame and guilt. The truth is everybody else just did the best that they could, and that meant reaching out and saying 'Look, we're praying for you, do you wanna pray?' That's alright because people very often don't understand and won't understand what you're going through when it comes to mental health so they do the best that they can. Don't get me wrong, I mean I totally judged people for saying 'Oh we're praying for you.'

"But that's just where I was at, and in terms of saying 'The Lord can heal you.' I believe that. I believe that miracles can happen, but I also believe as a father I have two young kids, and if I fixed every little thing for them they wouldn't learn anything. So sometimes you have to just show them enough to kinda help them get on the path and see where the penny drops when they figure something out. They're just totally overcome with joy, and they learn stuff. They also know what it's like to learn to live in struggles and stuff like that. And I believe that God has put things in my path that has helped me to grow. There have been significant times in my life where I prayed and called out to God and he's done miraculous things, but sometimes we wait and we hope in the Lord for miracles to happen, and for me, my experience in that is if you just give him a little bit of time, to grow and see what grows purpose. When people are saying 'you need to do this' I mean I might be wrong in saying this but people are saying 'you need to pray to God for healing', it's quite wrong for them to assume that God's gonna do something instantly when God's timing is perfect; it might take a second, a minute, a day, a year and sometimes, in my own case, when we're 20 we come through this whole thing. Cause now when I'm talking about mental health in the church, so many people are actually opening up about their struggles and we're starting to talk about what practical answer there is and solutions we can do to reduce stigma and combat."

Steph now believes he's back to the same creative form which made his first album, 2009's 'Light In The Darkest Of Nights', such a stunning debut. He said, "I found Christ when I was homeless, and then he saved me from that you know. In terms of mental health, there were things that were there from my childhood that I just didn't understand. I've been given help now to look at that stuff and process it, and also to hand it over to God. It's quite remarkable because in terms of song writing and reading the Bible and praying, I get so much spiritual food from it because when I was sick I was at a point where I didn't want to read the Bible, where I didn't want to pray anymore because you know Netflix was attractive when you're feeling lonely. You know I love Netflix but not for eight hours a day, I was trying to fill this void with avoidance, and the things that I know are good for me would just be completely eclipsed by the sinful nature of the world that draws me into self-seeking and self-centredness and loneliness and isolation. That is just my sinbin, but having been through all that and being able to see - a friend of mine said 'You can't wire a plug in the dark, you need to shine a light on that.' And by exposing all of the things that I was ashamed of and all the things that I thought were faults and brokenness I was able to allow God to kind of reach in, and help me to repair that stuff. If I could be so bold as to say God actually reached in and encouraged me down a path that would bring healing. It was a difficult path to walk down emotionally - I found dealing with emotions a lot more difficult than getting comfort from alcohol, you know. Through that I was able to engage with the Word of God, and now I don't just pray because I feel it's like the Christian thing to do, I do it because my life literally depends on it."

Now enjoying a creative resurgence, Steph has been busy songwriting, having recently partnered with Integrity Music. He said, "I'm looking at exploring and writing music for the congregation. I'm kind of looking at what it's like to worship from a place of vulnerability for me, and if the church would put on these songs then that would be fantastic. I've always found it difficult to worship in a congregation - and this is quite a personal thing - but I find it very easy to hide behind a guitar and a microphone. When I'm alone with God in a congregation I feel really exposed, and my experience of getting close to someone has always been abandonment or rejection and this is stuff that's followed me through my life but it's kind of like that shepherd and sheep thing; the sheep will keep themselves at a safe distance even though they know that the shepherd is good to them and loving and will look after them and stuff like that. At the moment I'm exploring how to get very vulnerable in my own worship and then writing songs about that. Integrity are a great team and they have some incredible writers. I just feel like it's time to move forward in a new direction and see where I can go creatively in terms of new concepts. I'm not doing as much, but I am currently at home where I'm more emotionally available for my family which is, actually, much more than I ever had because I'm medication-free for the first time in my entire life, actually, ever since I was a kid. I'm trying to really engage with the things of real value and that's having time with my family, not being on the road as much, and doing concerts and things which I think are really worthwhile. I was a bit of a 'yes' man, and it was all worthwhile, sharing the Gospel is all worthwhile, but for me I need to have a bit more input in my kids' life now and spend more time with my wife and writing congregational music at home is really gonna afford me to do that. So it's exciting times, it's different: it's got its challenges but I'm incredibly grateful for it."

I have known and followed Steph for about 10 years now and immediately noticed something special about his voice. Now I have experienced being close to someone who relapsed after I met him and has been fighting addiction and mental illness for decades. Steph's songs were so relevant also for me to hear, and I was able to share his music with my friend and others at rehab. I love Still Waters and Gold. I never tire of them.

I have known and followed Steph for about 10 years now and immediately noticed something special about his voice. Now I have experienced being close to someone who relapsed after I met him and has been fighting addiction and mental illness for decades. Steph's songs were so relevant also for me to hear, and I was able to share his music with my friend and others at rehab. I love Still Waters and Gold. I never tire of them.