Australia's STEPHEN BENNETT plays his first Cross Rhythms festival this year. Tom Gould got an update on the prophet musician. 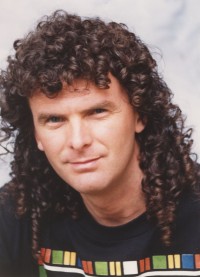 In Australia Stephen Bennet is an established rock gospel artist. Now, with a seering track on the 'Harvest Of The Heartland' compilation and a hot new album 'Future Dreams' out any day on Kingsway, are Britain's album buyers getting their first exposure to one of the most gifted rock gospel communicators in Christendom.

It's the prophetic element to Stephen's music, which will no doubt stir the Cross Rhythms throng. Seeing his function as a 'prophet musician' Stephen's music has the capacity to draw listeners into a profound experience of God. He has recently completed a book about the prophetic musician and has also made a one hour video on "The Anointing" which as well as teaching contains three clips filmed during Stephen's last visit to the UK. Cross Rhythms last spoke to Stephen (in CR21) on the eve of that visit. His Cross Rhythms appearance will kick off his third tour of Britain. I asked Stephen to begin his career update by asking him how different from his first album is this new 'Future Dreams' release.

"This album is different in feel from the first, not so much a diversion as a mix of new influences developed during the touring of the last few years which has taken my wife Rebecca and I throughout the USA, Australia, New Zealand and of course England and Scotland. (We hope to get Wales and Northern Ireland into the schedule this year!) The first album had a dominantly strong passionate rock edge, which suited the anthemic feel of that release. This is still a prevalent feature of 'Future Dreams', though I would stress a move towards an ethnic feel with jazz overtones."

Was then 'Future Dreams' a move away from the renowned Aussie rock sound with its crunching power chords?

"Not necessarily!" responded Stephen. "The album kicks off with 'The Blood', which is a full throttle guitar rock song boldly proclaiming the blood of Jesus Christ, with a powerful hook, 'By the blood of the Lamb', that wants to make you shout the glory and the victory of Christ's work on the cross. Definitely not a boring dirge about the blood of Christ! There is also 'Set Your Eyes', another energetic rock song inspired by the life of Elijah, a song of faith and challenge.

"'Future Dreams' explores some various ethnic and cultural sounds, including a sitar on the prophetic song 'India' and a distinctly 'Parisian' French accordion on the title track. I would say that my music is taking on a general 'world music' edge in its prophetic expression and I want it to continue in that direction."

On Stephen's debut album 'Hear The Sound' on Heartland there was a prophetic song for America. Has that theme developed with the song about India I wondered?

"The answer to that is a definite 'yes'. There is the song about India but the album also features prophetic songs for England and Scotland. 'India' could be described as 'sitar rock jazz', in that order - a different mix! This is possibly the first western Christian recorded song that features a live sitar. No, it's not demonic, just a beautiful piece of timber with strings!

"In 1993 the Lord spoke to me on a tourist trip to Westminster Abbey, along the lines that much had been planted in the gospel throughout England over the centuries and that fruit still remained. That the Lord had not finished with England as some have said, but that he was going to revitalise her by his spirit and awaken her to her destiny in these last days. The song 'UK OK' is pop/rock in style and strongly prophetic in nature declaring a new wave of the Spirit in the UK. The chorus hook 'UK OK la la la la la' is a joyful noise of celebration challenging those who are listening to the Lord to be ready! 'Scotland Rise' was penned in the orange glow of dusk, during the pre-Christmas snows of 1993 in the Scottish highlands. There are no bagpipes -it's been done before - but you can hear them in the 'body' of music. A prophetic song with an acoustic Celtic flavour, with down tuned drone guitars that cry out to the clans and the 'bonnie lass' of Scotland herself to turn to Christ and fulfil her destiny in him. The outro alludes to the national anthem and 'Amazing Grace', which will tug at the heart strings of any red blooded Scot."

I asked what other styles are featured on the album. "There are a number of ballads, atmospheric rock songs, a couple of pop/rock songs (Thief Of Dreams' is very Beatlesque in its feel, how British can you get?!) and '0 My Soul', which is a funk song best described as 'big and black!'. I have attempted to draw upon as many influences as possible for this album, to give it a good balance and diversity of styles."

I wondered whether the desire to produce 'world music' was opening new horizons for the singer. "Yes, it is my desire to travel the world ministering in various nations including Spain, France, Italy, Greece (etc, etc, etc), seeing their passion and the beauty of their music released in glorifying God. The advantage of being a Christian musician is that you can travel the world proclaiming the love of Jesus, not limited by following the markets to 'shift product'. I am looking forward to new opportunities developing for me throughout Europe and beyond."

The opinions expressed in this article are not necessarily those held by Cross Rhythms. Any expressed views were accurate at the time of publishing but may or may not reflect the views of the individuals concerned at a later date.
About Tom Gould
Tom Gould is the music director of the Wirral Christian Centre on Merseyside and heads up the School Of Creative Arts at the World Wide Christian Outreach School Of Ministry.

Stephen Bennett's music is awesome and really cool. It's underrated.