20 years ago today, I walked out of my job in Boots The Chemist for the last time, and into the world of full-time music and ministry. I was 20 years old with a guitar, some songs and a dream to hopefully make a difference in some people's lives. It's been an amazing journey. Different than I ever imagined it would be. Amy Grant never did phone, inviting me to tour with her. But I have played my songs and spoken in places I never dreamed I would.

We thought it would be fun to put together a compilation of 20 songs, taken from each of my albums from the past 20 years and for a very limited time make it available as a download, completely free. In fact, it will only be available until 25th April. In 20 days time this compilation will be gone forever, shut away in the dusty Parsons' archives. I'm giving 'Retrospective 20' away on NoiseTrade and if you want to leave a tip, all proceeds will go to Vision Mozambique to help care for orphans.

1. "Simple Faith"
I recorded the album 'Simple Faith' in 1995. Back then I had hair. I'd been doing this music thing full time for a couple of years and had written a variety of songs (in content, style and quality). Clueless about the recording process, I headed into ICC studios in Eastbourne with my friend Dan Wheeler and some of his college buddies and we recorded the whole album in six days. We pulled that off because Bruce Pont (who has worked on four of my albums) worked tirelessly and coached us through the whole process. There wouldn't have been an album if Bruce hadn't told us what to do - we were really that clueless. Dan and I first started hanging out in about 1990, writing songs and listening to tapes. He's such a musical guy and has played on everything that I've recorded since. I count him as one of my dearest friends. I wrote most of the song "Simple Faith" on a beach in Cornwall. I remember getting very confused at the time, because different preachers (who seemed to be nice chaps) where preaching completely contradictory things. Yes, I had stumbled upon the world of theology. Important, but difficult to navigate. This song was my attempt to get back to a simple, solid foundation.

2. "My Heart Longs"
This was the last song on the 'Simple Faith' album. I wrote it a few days before we went into the studio and was still finishing it on the day we recorded it. I think I was trying to sing "sensitively" (bit girly) and it sounds pretty funny all these years later. But the lyrics are as true for me now as they were then.

3. "The Colour Of Life"
'The Colour Of Life' album was recorded during 1999. Danae and I got married in 1998, and we were completely broke. (Some things haven't changed much). I couldn't afford any studio time and so we scraped together some money and purchased an eight track recorder. We were living in a cottage which some friends let us rent very cheaply, and so we recorded there in the spare bedroom. Bruce borrowed a mixing desk and mixed it in the dining room. "The Colour Of Life" comes from when I went through a phase when I was simply blown away by colour. I would stop and pay attention to the colour of pretty much anything and be overwhelmed with gratitude.

4. "Ever Since Eden"
Another early song. I was starting to connect the dots between the history of our faith and our place in it. I always loved the outro of this song; my friend Paul Taylor came and added some soaring saxophone. 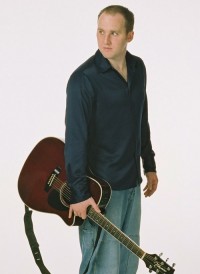 5. "No Greater Love" (live)
I remember being deeply moved by the movie Saving Private Ryan. It brought home the bravery of previous generations. As I pondered that kind of bravery, I thought about the Penlee lifeboat crew who gave their lives trying to save others when I was a child. The natural place for me to take the song was to the bravery of the cross. Originally on the 'Colour Of Life' album, this version is from the 2006 live album.

6. "Man Needs God" (live)
I was touring in the USA and started writing this one morning in Waco, Texas. I think I finished it when I got back to England. I've sung this song hundreds of times since. Again this is taken from the 2006 live album.

7. "I See Jesus"
By 2002 Danae and I had felt the call of God to head north to Cheshire. I ditched the eight track and got my first computer based pro tools set-up. I was still fairly clueless, but once again Bruce came along and co-produced the 'Standing' album with me. Bruce, Danae and our dear friends Brad and Cyrilyn recorded backing vocals. Dan again played guitar. It was a fun record to make. Several of the songs on 'Standing' dealt with God's kingdom coming; real lives being transformed in real ways. "I See Jesus" just reflected what I wanted to see happen in large cities and small villages, and still do.

8. "Heaven Is Coming"
This song started out as a guitar part with a melody. Writing is a mystery to me, I don't understand it. I clearly remember that this particular song "felt" sort of prophetic before I had even written a lyric. I knew that I had to declare something. The lyrics flowed later.

9. "Truth" "
The post-modern rise of relativism and personal philosophy fuelled the writing of this song.

10. "As I Am" (live)
For years, I opened every gig with this song. It set the stage for God's welcoming, inclusive grace. I borrowed a hymn lyric ("Just As I Am") and used it in the bridge. This version is from the 2006 live album.

11. "Don't Need To Understand" (live)
I remember finishing this song whilst staying with a host family in Idaho. The initial idea came during a writing session with Dan but we never fully flushed it out. Sometimes a lazy Idaho afternoon is what's needed. Again from the 2006 live album.

12. "Finish Line"
The 'Certain Possibilities' album was released in 2004. Despite my best efforts, I still couldn't get a record label interested in working with me. So once again I set out to try and make the best homemade record I could. It was a far more personal reflection on the journey of faith, as I started confronting some of the personal responsibilities and struggles that most 30-somethings do. The first time since childhood that I really struggled with doubt hit me at this time. Why was this music ministry stuff so hard? Why did bad things happen to good people? I was hurting. Paul's words in Scripture to "run with endurance the race set before us" rang true and become part of my personal declaration, along with the idea that one day, at the end of all this, I will actually see God. "I tread the steps of those who've gone before" was a reference to those of previous generations (including my maternal grandmother, whom sadly I never met) who are now "absent from the body, present with the Lord."

Hi Steve, saw you at Bush this year & I was truly inspired! I played in a few bands b4 wife & kids and I loved live playing. My favourite was Heavy / rock / blues(Ozzy, Zakk Wylde, Eric Clapton unplugged, and the like). Basically not suitable at my local chapel. Never really like the 'normal' chapel stuff but love your music & style, bought a couple of your albums from your wife at bush. Truly inspirational. I've looked on the net for the chords for your music but can't find anything. Do you allow access to your stuff? If so any chance I could have access? My favourite is 'I'm OK' followed by 'Man needs God' I could go on. I could probably work it out but i noticed you were cappo'd by a note or so at Bush so I wanted to get it right.