Stewart Henderson: The wordsmith shares thoughts from A Poet's Notebook 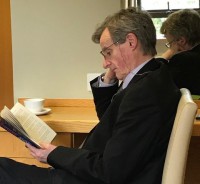 Poetry written and spoken has continued to be part of the Christian scene and from Gordon Bailey and Steve Turner through to Peter Nevland and Joshua Luke Smith, poets have brought much to the life of the Church. But there's one British Christian poet above all others who has escaped the insularity of the Christian subculture and whose broadcasts, books and live appearances have made him a popular figure with a mass audience, Liverpool's Stewart Henderson. His long tenure on BBC Radio 4's Questions, Questions selling books for adults and children and his occasional musical collaborations with songsmiths like Martyn joseph and Gareth Davies-Jones have brought him a level of popularity few poets, Christian or non-Christian have achieved. His latest volume, A Poet's Notebook, is a skillful, witty, humourous and thought provoking book which alongside 21 of his poems both old and new offers colourful commentaries which are part reflections on the poetic music, part travelogue and part thoughts on a wide range of figures including Emily Dickinson, CS Lewis and Malcolm McLaren as well as personal encounters with Malcolm Muggeridge, Madeline L'Engle (A Wrinkle In Time) and John Pac (the founder of folk pop's Parchment whose forerunner Trinity Folk gave Stewart a foothold in performing his poetry before an audience).

Tony: How did A Poet's Notebook come about?

Stewart: The then-commissioning editor at Lion Hudson, Alison Hull, approached me a couple of years ago and said, 'Do you want to do something?' I thought, 'That's curious.' Usually now, because of the times we find ourselves in, you have to come up with a project and sell it like billy-o. I came back to Alison and said, 'What I'd like to do is mainly new poems, with a few old favourites because people had requested them, but with a preceding 2000-word chapter on the genesis and the influence that fed in to the poems.' And she said, 'Great! Fantastic!' So I signed the agreement contract in December 2016 with Lion Hudson.

Stewart: They did - they went into administration, in fact. Then a businessman came along and invested in the company, by which time - February 2017 - Alison had been made redundant with 36 of her colleagues. I just wrote on in blind faith. I started, so I finished. Come the end of May, when I was due to hand the book in - I have many failures, but hopefully timing isn't one of them - I got the manuscript in. Lion Hudson had re-emerged and is in a far better shape than it was at the beginning of 2017. Now they're producing some really good and interesting books. Hopefully mine is one of them. It's a book that seems to resonate with people of our generation. Also there's an element of me metaphorically tidying the attic. I'm filing things away because the clock is ticking. I'm 66 this year. I wanted to set things in order, and also wanted to pass on the archives to any who are interested in reading them. We write our wee books then we fade away. People have been very kind in their responses to A Poet's Notebook. I was talking to a chap yesterday in church and he was incredibly complimentary. The discussion came up that in a strange sort of way A Poet's Notebook is a tribal elder's book. I know that sounds rather grand and highfalutin, but if we don't have that history, if we don't have that archive, if we don't have that realisation of where things come from - especially for the younger generation, the social media generation, where all is so transitory - A Poet's Notebook is about the past, and the past that made me and hopefully my readers as well.

Tony: The received wisdom is that poetry books don't sell.

Stewart: I'm familiar with that view. There's a plus and a minus to that. Some poetry books sell, and some poets sell. I've been fortunate over the years and some of my contemporaries, people like Roger McGough, the poet laureate Carol Ann Duffy, Jackie Kay, Michael Symmons Roberts - people who have established a reputation.

Tony: Is that because they gained access to the mass media, and held on to that access?

Stewart: Oh yeah, very much so. You have to. My connection with Radio 4 over the years, which is going back a long time now, and I continue to be heard on the network, being on the rota of presenters for Pick Of The Week, which goes out on a Sunday evening. I'm in a privileged position. I suppose it is to do with aural profile, because poetry works perfectly on the radio. Those poets I mentioned - John Cooper Clarke springs to mind - who have concentrated on performance, go out and sell the poem. That improves sales for the publisher. The bottom line is, has this book made a profit? I've been fortunate in that every book I've made with a major publisher has made a profit. Poetry books sell over a period of time - the flurry with the publication, interviews such as this, all help with sales. I'm not really interested in sales, I'm interested in the effect the poems have on the reader.

Tony: I believe that the best song lyrics are poetic. For instance, "Papa was a rolling stone/Wherever he lay his hat was his home/And when he died, all he left us was alone."

Stewart: Very much so. Did Smokey Robinson write that?

Tony: I think it was Norman Whitfield. One of the Motown team.

Stewart: The best pop lyrics are poetry. I'm a huge fan of people like Cole Porter, Rogers & Hammerstein. There's a wonderful lyricist called Dorothy Fields. If you say Jerome Kern to people who are slightly knowledgeable about music from the '30s and '40s, they'll say, 'Oh yes, he wrote "The Way You Look Tonight".' He wrote the melody, Dorothy Fields wrote the lyrics. I always go to the lyricist. You look at some of Paul Simon's stuff. Bob Dylan. Going back to Motown: 'This old heart of mine been broke a thousand times/Each time you break away, I fear you've gone to stay.' Holland, Dozier, Holland said that about love in four lines. You're right: the song lyricist is the precision poet. I've written song lyrics over the past 25, 30 years. It's a different kind of writing, but the discipline is the same; the end effect, hopefully, is the same: you want the words to hang on the listeners' ear, and to be implanted in the heart.

Tony: I really like your poem Summer In The Library and your reflections about reading as a child. Have you still got your Billy Bunter and Just William books?