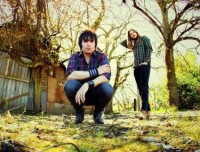 There's something slightly ironic about reviews that raved about the "new sound" featured on the debut EP by StompTown Revival. In fact, the sound of STR is decidedly old with a mish mash of influences taking in old school country, Mississippi blues and American folk. But however you classify it there's no getting away from the fact that the 'StompTown Revival' EP is a major success, it rapidly climbed to number three on the iTunes chart and getting considerable airplay with Cross Rhythms homing in on the track "Waiting For The Man".

StompTown Revival consist of Gabe Martinez, one time frontman for pop rockers Circleslide (who got Cross Rhythms airplay with songs like "Soul" and "Samson"), and Brandon Bee, a well known producer with over 80 projects to his name including Stacie Orrico, Matthew James and Amber Pacific. The duo's rootsy sound is driven by acoustic and slide guitars, a harmonica and a stompbox, a percussion instrument much loved by early bluesmen while their lyrics are powerfully vertical.

Gabe told journalist John Brandon about the duo's origins. "Brandon and I have been friends for about eight years now. He's from Seattle and I'm from Nashville, and we met at an artist showcase in the Northwest. Over the years we've found ourselves playing on each other's projects, writing songs together, so it wasn't unusual for him to come to town and write at my house. At the time, I had a dobro lying around that Brandon picked up. . . I also had some harmonicas strewn about as well. . . and the music that came was just this raw, joyous, bluesy sound that neither one of us were expecting to hear. We both started talking about the possibility of us joining forces for a project, and over the course of a year it developed into StompTown Revival."

The group did not set out with any intention of developing "a sound". Explained Gabe, "It wasn't this contrived thing. It's all coming from this history that we both have, this connection we both share with what I guess can be described as American roots music. He grew up playing bluegrass style music, playing lap steel and slide guitar, while I grew up playing folk and blues guitar with the harmonica, and yet on our own we wound up making very British/pop, Euro alternative sounding albums. And though we both love Radiohead and Sigur Ros, we grew up listening to Neil Young, Bob Dylan, Robert Johnson, and for some reason that music is just now bubbling back to the surface so perhaps we're both re-discovering our roots around the same time."

The EP features a worship song, "Anthem Of Love", a warning about the forthcoming judgment day, "Waiting For The Man", a revival of the old hymn "Leaning On The Everlasting Arms" with a distinctly mountain music sound, and "Born Again", which reflects on a deeper, more intimate relationship with Christ. Gabe spoke about "Born Again", "To me, it's this honest end of the day type of assessment of someone's life and faith, from the very specific viewpoint of a travelling musician. The road is like life with all its disappointments, unexpected surprises, laughs and tears. After so many years at it, the obvious questions start to gnaw at your soul and this song sort of answers with a prayer to be made whole again. . .to be given a new heart. I may have had this melody and guitar part roaming around in my head and as I showed it to Brandon he took it to new territory. Lyrically, it was very collaborative. In many cases, we're actually singing lyrics that we individually wrote. So if Brandon is singing a verse, more than likely he wrote it. The awkward result is that live it's easy to remember what we wrote, and sort of hard when it comes to singing the other person's lyrics. Kind of funny how that works."

The first song on the EP is "Guiding Me Home". Said Gave, "That's the one Brandon showed me during one of my visits to Seattle. He had the music, melody and some lyric ideas, then I came in and helped finish it up. It's become one of my favourite moments, as it really starts off soft and folky and then gets an attitude that begins to groove with a bit of blues and soul. You can hear traces of Led Zeppelin, Crosby, Stills And Nash and the Beatles, but with a very downhome type of approach. What I would call front porch music."