Decapolis: 10 Questions answered by the punk rockers from Cumbria 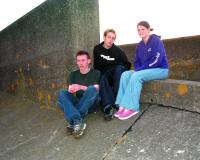 Punk rock is the style we all love. It's a great way of communicating with people our own age. Punk is all about standing up for what you believe in. It's full of life and all about having a great time.

3. What's with the name Decapolis?

The name Decapolis is taken from the New Testament. It was the name given to the 10 towns where the Christians fled just before the destruction of Jerusalem. It's also where Jesus spent a lot of his time.

4. There seems to be a punk revival going on. Do you know all the other bands like Cephas and Zedisforzebra?

Yes, we have been in contact with them, along with a great Christian punk band from Scotland called Gopherwood. Hopefully we are going to organise a gig together around London later in the year, something to look out for.

5. What's the best thing about your EP 'Rebel'?

We are on it! Nah, the best and most important thing is that we wrote all the songs for the only one worth writing songs for.

Phil, an ex-guitarist, left the band just after we recorded it! No, only joking, Phil has moved on to pursue other goals and the band has matured to form a solid three-piece.

7. Have you ever spit on the audience?

Only our relatives. Well, not actually spit, that's disgusting, but incidents involving hurling toilet rolls and running around hitting tea pots has been known at our gigs in the past.

8. What's the most embarrassing thing that has happened to the band?

Lately our webmaster has decided to post many pictures of us when we were younger. We hadn't realised that at one of our gigs the engineer had got hold of these pictures and was showing them on the big screen throughout the show.

MxPx, although the Sex Pistols are responsible for starting off the craze we now call punk rock, but instead of using anarchism and violence to state our beliefs we use the one and only Jesus Christ.

10. What does your church/churches think of punk music?

Well, we are yet to be permitted to play in a meeting on a Sunday morning, but through the youth groups the churches are seeing the impact we can create.

For more on Decapolis visit the Decapolis artist profile