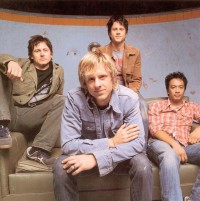 It was last year that the Platinum selling pop rockers from San Diego Switchfoot first teamed up with international charity CURE. The organisation set up to help heal kids with treatable disabilities joined forces with the band last autumn going out on the road with the group. Now CURE is again touring with Switchfoot on the latter's Looking For America Pt II tour. Together they have raised enough funds to provide over 200 surgeries for children in need.

Jerome Fontamillas, Switchfoot's keyboard and guitar player, spoke about working with CURE. "I had the incredible honour to go to the Philippines, not to play a show, but to visit a hospital operated by CURE - a hospital that specialises in treating children with orthopedic conditions. I was born in the Philippines and being Filipino made it that much more special to go back to my birth country. During this trip I had some pretty incredible experiences that I will cherish as long as I live."

To encourage the band's legion of fans to donate to the work of CURE a unique scheme has been set up so that if anyone donates before 18 February they will be entered in a draw to win a round trip to the Philippines to visit the CURE hospital as well as see Switchfoot live in Manila. (To donate visit: https://goo.gl/iAieuR)

Switchfoot's latest album 'Where The Light Shines Through' is the band's 10th. The band's first nine albums have sold over 5.7 million copies.