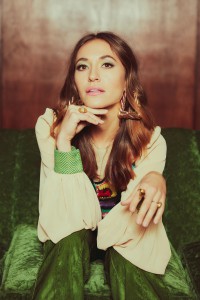 A surprise collaboration, a single featuring rock hitmakers Switchfoot and CCM star Lauren Daigle, was released on iTunes on 3rd November. The song "I Won't Let You Go" will be known to all Switchfoot fans. It's from the band's 2016 'Where The Light Shines Through' album which as well as "I Won't Let You Go" has produced several other Cross Rhythms radio hits including "If The House Burns Down Tonight" and "Holy Water". The decision to record a re-imagined version of the song with New Orleans-born CCM star Lauren Daigle, whose song "How Can It Be" is one of the biggest selling Christian music hits of the last 10 years, came about after Lauren performed at Switchfoot's BRO-AM event, an annual benefit concert for homeless and at-risk youth in San Diego. There the band persuaded Daigle to sing with them on stage. Several songs were discussed before they decided on "I Won't Let You Go".

Switchfoot frontman Jon Foreman shared on Instagram, "Lauren Daigle has one of the most beautiful voices on the planet. She visited our studio to write some tunes and collaborate a few months back. . . WARNING: listen in a safe place where you can quietly shed tears of joy. You're amazing, Lauren! For me, when I wrote that song, I was thinking of Love Himself - the transcendent maker of time and space - singing 'I won't let you go' to me. To be able to hear somebody else singing those lyrics - and Lauren's voice is so amazing - it felt like a beautiful chance to kind of enter into the song in a different way."

Lauren herself described the experience on her YouTube channel, "As we were singing the song all together, there was just such a feel in the air. . . the guys were just so encouraging about all of it and they said, 'Hey, would you like to come jump into the studio next week and we can record this just for fun?' I think as the time unfolded, as the experience unfolded, we realised, whoa, this has the potential to be something a little bit more than just us messing around in the studio." She continued, "I just loved their openness to collaborate. It was so much fun! There was so much excitement in the room that we just had to share it with all of ya'll."