T.R.U.C.E.: Evangelists and disciples disguised as a hip-hop group 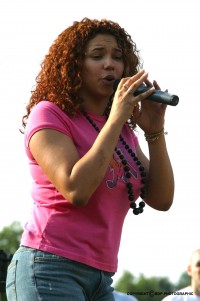 In the summer of 2006 the London borough of Hackney received a seismic impact when T.R.U.C.E. landed in their midst. Seldom has a missions team created such interest from the mass media and seldom have such efforts brought forth such amazing fruit - with street robberies and gun and knife crime in the area falling by at least 40 per cent and hundreds of young people from some of East London's toughest gangs making commitments to Christ. T.R.U.C.E. are based in New York and are led by Nicky Cruz - the evangelist and one-time gang member whose lurid early life and dramatic conversion was chronicled in the best selling book Run Baby Run. T.R.U.C.E. are a loose aggregation of dancers, rappers and preachers who use the music of the streets as a means of connecting with urban youth. Cross Rhythms broadcaster Chris Mountford quizzed the CEO of Nicky Cruz Outreach, Patrick Dow about the T.R.U.C.E. ministry.

"Several years ago we started auditioning performers in New York City. We have 15 young people in the group, and they represent 10 different churches and five denominations. They're all very talented - either they're singers or rappers or break dancers. We train them in music but not only that but in outreach and evangelism, in reaching people in lifestyles that they themselves have come out of. We're kind of evangelists and disciplers disguised as a hip-hop group. When we train churches, we train large groups of people to go out on the street with the Gospel. We tell them this is something that has gone on since the first disciples. We call our initiatives hit and runs - they're really just brief street concerts leading to ministry. We'll go out, set up a sound system and draw a crowd."

T.R.U.C.E. (which stands for To Reach Urban Communities Everywhere) started in its current form in 2001. Explained Patrick, "We were staging an off-Broadway production of Nicky's life called Run, Baby, Run. It was actually my wife Alicia, who is Nicky's eldest daughter, who had a real desire to concentrate more intensely on reaching the inner cities and the ghettos here in North America. So that's when we started recruiting young people. We found a young man named David Ham who's a director of our group in New York. He was a youth pastor in Queens. He himself is a writer and performer and a rapper and just a tremendous young man and has a heart and a passion to train young people to turn them into labourers for the harvest. So we brought him on board. Then, through his connections in New York City, he started auditioning musicians and singers. In 2002 we moved to Oslo, Norway for eight months, doing outreach working with local churches and the national government. We ended up working in quite a few Muslim communities there. Oslo was, at that time, the drugs capital of Europe - they distributed two million needles annually. So we'd do street outreaches. We'd present people with Christ, tell them how much he did for them and then ask them to make a decision. We'd pray for people right there on the street. So there's hip-hop, there's music, but really the bottom line is we're just throwing out bait, to draw people to a certain street corner in an inner city location so we can tell them what Christ did in our lives, how he brought us out of hopelessness, despair, drugs, gangs, suicide, whatever. It's pretty compelling when the Holy Spirit shows up and people start crying, especially in places where they say it can never happen. They'd say, 'You Yanks - that can happen in America but don't expect it to happen in Oslo.' But it did and it was great."

Patrick explained the organisational structure behind T.R.U.C.E. "Nicky travels full time. Plus he's writing books. That's one arm of the ministry that goes on, on an on-going basis, nearly every weekend. But in New York David Ham, our director, will work with the team. We're also bringing back our theatre department. We're going to run some plays in New York City. So every weekday we'll rehearse. Again these young people in T.R.U.C.E. are involved in their own churches so many of them are busy. Some are in college, high school. Then once a month they will perform or minister around New York City. Last week they were in Brooklyn, next week they'll be in the Bronx. They do stuff around New York City, around the State of Connecticut, around the State of New Jersey. Then in the summer is when we do our extended outreach where we'll go into a city for four or five weeks. We'll be working with the local churches, perhaps the law enforcement people - which is what we did last summer in London, down in Hackney, and Waltham Forest. We'll pick the highest need areas; highest crime areas and we'll go in with some local volunteers. The mission culminates with Nicky coming in and speaking for one or two nights. For instance in London last summer we were brought in by the London Met police and Scotland Yard. The last two nights we ran at a local nightclub where Nicky spoke. That turned out incredibly well. It was well attended. The police documented 1800 conversions - people that accepted Christ. They also documented a 40 to 60 per cent reduction in gun and knife crimes in those two boroughs. That's what makes us excited, when miracles happen and God chooses to show up in a hopeless situation like that."

T.R.U.C.E. have recorded two albums, 2004's 'Ready 4 War' and 2005's 'The Refuge'. Many of the tracks on them were produced by a Brit, Lawrence Allen, better known to hip-hop devotees as Woo. Explained Patrick, "Woo works in the R&B and rap industry and he was living in New Jersey just outside New York City for many years and was producing a lot of secular, non-Christian rappers and R&B singers. He's a highly sought after producer because his music is great, very catchy and marketable and everything. Sal Vasquez, one of the guys in our group at that time, was from Staten Island. He was a drug addict, a gang member, a very violent kid. His parents kicked him out. His life had a contract on it, he was being chased by these gangs. He got saved in the middle of a park one day when Jesus revealed himself to him. He looked to Heaven one day and said, 'God, if you're real just show yourself to me.' Sal joined our group several years later. Sal was telling a friend of his, who was not a Christian and was still in the gangs, about what had happened in his life. His friend said, 'Man, you sound like my producer friend Woo - the same thing happened to him.' And so he gave Sal the phone number to call Woo, who had just become a Christian and come out of a pretty sordid past. So that's how we got connected with him. Initially we didn't know Woo was a producer of urban music. For several months we were just interacting with him and encouraging him and sharing Scriptures with him. One day we asked him, 'What do you do for work?' And he's like, 'Well, I produce hip-hop music.' So that's how we got hooked up with him."

Patrick concluded the interview by summarising what T.R.U.C.E.'s music aims to do.
"We want to draw kids, the people that hear hot music, they love to listen to. T.R.U.C.E.'s music is quality, it's world class, it can compete with anything out there. But with lyrics that are life changing."

Does this ministry disciple others in different areas? I would love to bring this type of outreach to the youth in my area or does TRUCE perform in CA?

HEY T.R.U.C.E. IT'S LALA FROM COLORADO SPRINGS, I MISS YOU ALL CAN SOMEONE EMAIL ME I WANT TO KEEP IN CONTACT AND IF YA'LL HAVE EMAILS LET ME KNOW.. LOVE YOU ALL MUCH...

Only God Can do these things, I was a founder of the Gang truce in LA The Valley with 4 others.

Wow!!! am so blessed and highly motivated to know that there is rap evangalists out there representing CHRIST with they rhymes...the highest praise and glory JESUS! i luv you cats with a passion and will keep your ministry in prayer.....we will more than delighted to have you rip mics and twist hell in Uganda....

For more on TRUCE visit the TRUCE artist profile