T Haddy: The Georgia-based singer and rapper with over 20 years of service

T Haddy is something of a fixture in America's Christian hip-hop scene. He's been singing and rapping for going on 20 years and his xRhythms playlist hit of 2019, "Fire Fire (ftg Enlitement)", is just one of a long stream of releases which stretch back to his 'The Great Repentance' album of 2006. I spoke to the Georgia-based emcee and singer about his ministry and music.

T Haddy: "I was born in Atlanta, Georgia. I moved for 10 years to Detroit, Michigan - a 10-hour drive, 600-700 miles - then moved back to Atlanta. It was my mom and my dad splitting up. My mom went to where she had family to get away from my father. Any kid, being young and not being able to see your dad any more, that would be hard to deal with. But my mom's very strong. When we moved here, she ended up starting a church. Without those actions happening, I don't know if I would've picked up the skills I did. She didn't have anyone to play the keyboard, she just bought me one and told me to learn. I started a job at the same time, so that started my independence as far as music is concerned. Just like anything in life, it had bad parts to it, but at the end of the day it all worked together for my good."

Tony: You've done a lot of recording, haven't you?

T Haddy: "Absolutely. Tons of them. I've done music releases and I've done mixtapes. Mixtapes are responsible for putting my name out there, getting me known. It was at a time when the market was over-saturated with other people doing mixtapes. I was probably one of the first artists in my genre to step out and grab tracks that were playing on mainstream radio and put Christ-centred lyrics on them. I caught a lot of ridicule for it, but it was a blessing in the end."

Tony: Slowly but surely hip-hop is becoming a major influence in gospel music. Have you encountered people in the Church who won't accept even gospel rap?

T Haddy: "Yes I have. I like to feel I was instrumental in helping to usher in a new era. I can't speak for all places, but if you listen to the radio now, hip-hop music and urban gospel has influenced the culture of other gospel music. Now you have choirs putting things like 808 tracks down in their songs. I've always felt like the Church has been two to three years behind changes in the music industry. Everybody complains about change, and then eventually they take it on, because, at the end of the day, we want to influence all generations with the word of God. You have to be willing to make those adjustments to be current with the times. But you don't want to lose your roots of where gospel music was. When you really do your digging you'll find out that producers responsible for a lot of megahits, a lot of pop stars, those guys come from the church. Bruno Mars' producers are church guys. I have a cousin who happened to play drums for everyone. Having a conversation with him enlightened me, opened my eyes to the inside of the industry. I've had some success but I haven't had success on the level that he's on. He's a church boy himself. My uncle, his father, pastors a couple of churches. Just being in and around the industry, and being around those people, he was able to enlighten me that a lot of movers and shakers, people who are producing the music, usually come from the church. You have this fight and this restriction, these boxes they keep trying to put Christian music in. They're never going to fit in the box, because God doesn't fit in the box."

Tony: xRhythms has been playing "Fire Fire". Tell me about that song.

T Haddy: "I've always been intrigued by the way God uses fire - the metaphors. One of those things is the way that fire is both a purifier and a winnower. It helps to separate the good from the bad. I have another song called "Holy Ghost Fire", which is kind of the same principle. When you read the Word from cover to cover, you will see something that repeats. Our flesh by default is cursed, it's evil by default. You can't function without the Spirit. That Holy Ghost fire is there to burn up those things that ought not be in you. That song, in a nutshell, is saying, 'I need that fire in my life.' It's featuring a hip-hop artist that I really admire that's coming up. He's really good at what he does, and he definitely shares my feelings on fire and its importance in the Word."

Tony: What are your thoughts on streaming?

T Haddy: "I have had to make a couple of adjustments. I'm always learning. I'm in my learning stage right now, just soaking up the current sound. Once I feel like I'm ready for another push, I'll release music. The volume of music that's acceptable to release today is not like it was when you would get a year between albums. In today's market, with streaming, I'm looking to release some singles 'til I feel like there's a collected thought, then I'll release an album. I don't see myself stopping any time soon." 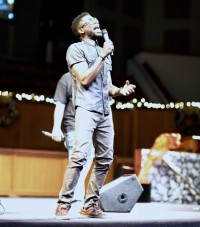 Tony: Tell me about your latest song.

T Haddy: "I have a song called "Trap Gold". I shot a video. The song is taking a word that has negative connotations - the trap, loosely defined as the place where people sell drugs. But our culture has a habit of grabbing things that are negative, and flipping them to make them work for us. That word 'trap' definitely has been embraced by the culture. "Trap Gold" is basically a prayer saying, 'God bless whatever I touch my hand to, so I can be a blessing to somebody else.'"

Tony: Do you record in your own studio?