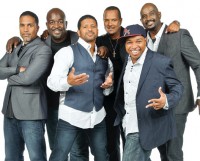 In anyone's book, Take 6, who have worked with everyone from Whitney Houston, Stevie Wonder, Ella Fitzgerald, Quincy Jones, Brian Wilson and Ray Charles, not to mention regularly performing at the White House, are the greatest acappella group in the world. Now the Nashville-based sextet have returned with a new lineup and a new album which amongst other things features Stevie Wonder on the track "Can't Imagine Love Without You". The group, who this year are celebrating 25 years of pristine acappella harmonising, spoke to Gospelflava.com about starting their own record label. "After 20 years in the recording industry, and with the changes record companies are making, we thought this would be best for us. We've learned a lot and are able to give back to the community by being artists and by way of our business. It was a natural but a challenging move for us. There is a lot of production we have done for other artists that we thought we could do it for ourselves. We knew it would be a challenge but definitely well worth it. So we decided to put our product through first. It's our way of giving back to the people and beyond."

So how did the group feel about their achievements so far, which include 14 albums, one that went Platinum and another that went Gold, 10 Grammy Awards, 10 Dove Awards, 23 nominations for Grammy Awards, 11 Dove Awards nominations, two NAACP Image Awards and one Soul Train award? Said Claude McKnight, "Honestly the awards are just a 'pat on the back' symbolizing what others in our field may think of us at any given moment. They're something that we appreciate, but we take very seriously that we aren't in this for the awards, but, rather, to 'share' a very important message with people who we really think need to hear it."

In 25 years the band has only changed their line up twice, as group member Claude McKnight explained, "I feel that this is the Lord's group, and what the Lord has brought together 'let no man break-up!' Honestly. . .it's with much prayer and maturity that we've been able to stay together for so long."

Joey Kibble in an interview with Ebony said, "It hasn't always been a tight-knit group; that's been something that has been built over time. You're going to have conflict and get on each other's nerves, fight and even throw punches, but you have to actually learn to get along and respect each other's different approaches. That's an art. And that's why the name of our album is called 'One' - all six of us have grown into one person with one unified goal."

Fans of the band will know the original members were Claude McKnight, Alvin Chea, Cedric Dent, Mark Kibble and David Thomas. To pursue a career as a producer the group's Mervyn Warren left after their second album 'So Much 2 Say' and Mark Kibble's younger brother Joey Kibble was invited to join. The band's Cedric Dent retired in 2011 and Khristian Dentley joined the line up.

Said Nashville-based Take 6, "We are simply a group of guys who sing acappella gospel and you add in some pop and jazz sound to it and you have Take 6. And to really be honest with you, it's just the message of the Gospel over and over. That's what we do. That's the gift we've been given by God. That's how we started. This is our strength and our focus point. We've noticed that people really love the acappella sound. That's what we did and what we do best. It's our unique approach to music that people are used to. Our personal approach to it also makes it an intimate setting for them. We are singing without the instrument. Our voices are our instruments."

The group had fun recording 'One' and considers it a return to their spiritual heritage. "We're pretty excited because this album is one of our first completely gospel-influenced albums," said McKnight. "It kind of takes us back to when we first started out. The touring that we're planning on doing will include a lot of churches and gospel-flavored venues. Interestingly enough, we've always toured internationally because were basically a jazz group and we still have those elements on this album but lyrically it's a lot more gospel based. We really wanted to go back to our roots and to be a part of that and uplift people from that standpoint."

While they have dabbled with straight jazz and even adult R&B rhythms over the last decade, Take 6 dusts off Korean War-era gospel songs and injects them with a modern flair while maintaining their traditional quartet style of singing. Handclaps and a little percussion enliven The Selah Singers' 1952 tune, "Down Here I've Done My Best".

The hymn "Glorious Day" and the Jackie Verdell & Brother Joe May's 1962 song "You're Gonna Need Him" both get Pentecostal workouts but with a sophisticated polish. The ballads "Alleluia" and "What A Friend We Have In Jesus" are given tender arrangements that show off the group's layered harmonies. On "Noah" their voices simulate instruments to create the signature Take 6 sound. The mid-tempo tracks "In My Heart" and "Farther Along" boast minimal instrumentation and a lot of funky swagger.

Rounding out the set is the wistful tune, "Can't Imagine Love Without You" that includes a harmonica solo and lead vocals by Stevie Wonder. Take 6 first performed the song with Wonder on a BET Honors television special in 2010. "We just liked the way the song flowed and we liked how it felt," said Kibble. "We needed one more song for the CD and somebody made the suggestion that we should sing that song."

Take 6 has come a long way from their days at Huntsville, Alabama's Oakwood College where McKnight formed the group as The Gentleman's Estates Quartet in 1980. The group eventually became known as Alliance but when they signed to Reprise Records in 1987 they found that there was another group with the same name, so they became Take 6. Their self-titled debut CD won over jazz and pop critics and they've never slowed down, even after 25 years.

One day when I'm rich and getting married I'll invite Take 6 to come to South Africa and sing for me, WORD.

For more on Take 6 visit the Take 6 artist profile