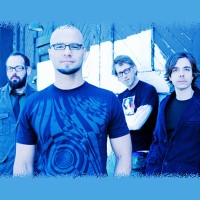 When at the end of last year Rounder Records released Ten Shekel Shirt's 'Jubilee' album it was a big surprise. For a start, Rounder Records is a well known mainstream label specialising in folk, blues and bluegrass none of which exactly describes the acoustic-rock-into-Switchfoot-dynamics of the band from New Haven, Connecticut. Secondly, many pundits had assumed that Ten Shekel Shirt had long since folded. The band started with a bang when the Christian radio hit "Ocean" from their 2000 'Much' debut gained them a Dove nomination but after overseas gigs (including an appearance at Soul Survivor) and the release of their 'Risk' album in 2003 Ten Shekel Shirt seemed to drop off the radar.

The band's singer/songwriter and driving force Lamont Hiebert explained to Christianity Today what has been happening over the last five years. "In the making of our second album I decided to become more than a spokesperson for the cause of abolition on behalf of exploited children. I just felt like once I heard that more could be done practically on the ground, it wasn't enough for me to be talking about an issue - I had to be more practically involved. So I founded a charity, Love146, formerly Justice For Children International. With a couple of colleagues of mine we founded this organisation and, thankfully, now it's grown its own legs and it's much bigger than Lamont Hiebert, much bigger than the cofounders and much bigger than Ten Shekel Shirt."

It was a combination of things which brought Hiebert's band back into the CD racks. He explained, "I was sitting at the charity offices a couple of years ago and I got a call from Rounder Records that they wanted to meet me. I didn't know a whole lot about them - they're a mainstream record company out of Boston. I ended up sitting down for lunch with their A&R guy and he just said that they were interested in signing me. It kind of caught me off guard and I ended up laughing out loud. But it put a bug in my ear that if it got to the place where the charity is stable enough, and if I wanted to pursue music again, I had an open door there. So I went ahead and recorded the album and ended up signing with Rounder after [that]."

Lamont pulled together a new set of musicians to replace the old Ten Shekel Shirt line up with Tim Sway, Colin Meyer and Jonny Rodgers replacing Austin Morrison, Tommy Lee and Jake Carey. Said Hiebert, "I like to surround myself with good people. I'm the primary songwriter for Ten Shekel Shirt - always have been. But I always have good people around me to work with. So even though I've been away from the recording thing for a while, it was quite natural to return to that environment. I also had so much in me from life and from working with this charity [that I wanted to express], especially the need to help restore these survivors of tragic abuse. So hearing so many stories of their suffering and pain, I knew I wanted to restore and bring healing and hope to these children. So many of the things in the album reflect my heart for that, and hopefully listeners can hear that."

Lamont was actually born in British Columbia, Canada. He explained to residentmediapundit website how a Canadian Mennonite ended up in New Haven, Connecticut, "My favourite audiences are college students and social justice activists. Where else on the planet can you find a more concentrated number of those than in the northeast USA? New Haven is somewhat central in the region and has great restaurants, ethnic diversity and intellectual influence."

Like many of today's Christian artists signing with mainstream companies, Lamont doesn't want to see Ten Shekel Shirt referred to as a "Christian band." He said, "I don't like to define my musical genre as Christian. Although I am a fan of Jesus and believe in the transformation of the human heart by God, I prefer to connect with fans from a variety of world views. As you know 'Christian' means different things to different people. And honestly some of those versions and definitions (especially when they are aligned with arrogant, elitist, exclusivist ideologies) make me a little twitchy. I am incredibly grateful that I get to be involved in two things that bring people together in this divided age. Music and the abolition of slavery. Most of us can agree on those things. I think Ten Shekel Shirt provides healthy doses of both."

At the beginning of their career Ten Shekel Shirt were considered very much a worship band. How does such a background link up with the group's current musical direction? Said Hiebert, "I believe that it's a natural step, from worship to loving our oppressed neighbours. As you know, the links in the Bible between worship and justice are incredibly strong and summarized by Jesus' statement that we are to love God and love our neighbours. As far as me being an artist with a message, I wouldn't say we're heavy-handed, which is a good thing. People who come to our shows need not worry about the guilt trip. There are a couple of intense moments - there's one song on the new record called 'It's Slavery' that's pretty combative. But for the most part, it's very hopeful, empowering and inspiring and hopefully has the fingerprints of God in it."

So how does Hiebert feel today about "Ocean" and his other worship songs of the past? He responded, "You know, it's just a different audience that I'm trying to hit. Music and justice on behalf of children is something that most of us can agree on and come together on. In a world that is so divided, I have the privilege to do something where I can bring people together. Since most of my music is not specifically geared toward the worship audience anymore, it's a good common ground for people to come to. We do splash worship elements into our sets live, and I think people have an opportunity to connect and engage God at our shows."

Christianity Today pointed out that though the song "Higher Ground" on 'Jubilee' isn't a congregational anthem, it's still extremely worshipful. Hiebert agreed. "Absolutely. That is a very vertical song. I like to put it like this: metaphorically speaking, if we hold our hands in the air for too long, we become spiritually constipated. And if we hold our hands out trying to help everybody all the time without God, then we become frustrated, burned-out and bitter. So the posture I propose - and I'd like to think it's represented in my new songs and in the Psalms of David - is have one hand up to God, reaching out to him for help and giving him praise, and the other hand protecting the vulnerable citizens, bringing healing, hope and comfort to them."

One of the most powerful tracks on 'Jubilee' is the title song. Explained the singer/songwriter, "It was inspired in part by the ancient meaning of the word 'jubilee', which is about emancipation and justice on behalf of the oppressed. And I sort of mixed the meaning of that word with the story of a girl in a partner's safe home in Thailand. We expanded one of their facilities; unfortunately, they didn't have room for the youngest of the girls caught in the sex trade, so we built a home for them - girls six to 12 years old. One of the girls that came into the older home, I believe she was 16 at the time, she walked in the front door and as soon as she saw the picture of Jesus on the wall of the safe home, she fell down on her face and just began to weep. After she gathered herself she said, 'This is the face, this is the place that I've seen in my dreams.' So the song was inspired about her. An odd thing about the song is that I kept thinking about Heaven, but I tried not to. For some reason the song just felt like Heaven to me. Yes, I was describing a safe-home experience; yes, I was talking about being free from slavery; but I couldn't get away from this feeling of Heaven, and it almost haunted me."

Great to feel your presence in your written comments. Thank you. .. could you comment on Servants Research Ministry posted on YouTube? 1-20-2020 J.C.

Do you guys have a song called "together"? My wife heard one that had the words together in it several times and the radio station said you recorded it. If so we would like to know how to purchase it.
thanks
Ron