All fans of lona will know the name TERL BRYANT. Now British Christendom's premier percussionist has an album out under his own name. Terl spoke to George Luke. 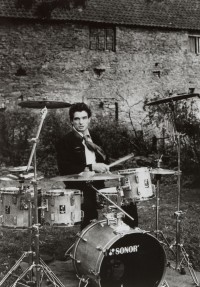 As a member of lona, Terl Bryant is one of the few British CCM artists enjoying some amount of commercial success. The self taught drummer and percussionist has worked with a variety of British and American acts before joining lona in 1992, after having done session work on their debut album two years earlier. Now we are about to see yet another side of him - this time as a solo artist - with the release of his solo debut, 'Psalms', which he spoke to me about at a cafe not far from his West London home. Before getting to the album, he told me a little about his background. Terl was eight years old when he discovered that hitting things could be fun. "I don't come from a musical family," said Terl. "In fact, I often tell people that my mother used to try to sing me to sleep as a small boy and I would ask her to leave the room so I could get some sleep. But my dad would always listen to rock and roll and that caught my ear a little bit. In school, we had one of those music classes where there was a great big box with percussion instruments and I just loved that. They were a great way for me to express myself, and something I felt I excelled in straight away. I had a few trumpet and piano lessons, but the drums were just special to me. At the age of 12, my father bought me a drum set and I was in the school band; by the age of 15 I was playing in pubs around Northamptonshire in local bands. It was most definitely a big love playing drums, and from really early on I wanted to be a professional drummer. A few people tried to talk me out of it, but I was committed to it; I followed through and bungled along. I didn't have any lessons; I just found myself doing it."

While growing up Terl was always more attracted to the music itself rather than to any stars as such. "We didn't have a telly until I was about 12 so it wasn't the visual aspect of rock bands that made me want to be a musician. I used to pinch my dad's records, which were anything from Desmond Dekker and early Elton John to the Carpenters and stuff like that. As I got a little older, I got into slightly heavier stuff - Led Zeppelin and some of the Beatles' stuff. But it was always the beat that got me, rather than the person behind it. In terms of drummers, my influences were Stewart Copeland of the Police, because of his wild and lively approach, and John Bonham from Led Zeppelin, for his power and strength. I was never into fusion like a lot of other musicians are. I just like a good, solid, powerful beat."

Telling of how he became a Christian Terl described his upbringing as a 'nominal' Christian one. "My mother's a Christian and we went to our local Anglican church in the village where I grew up and I was confirmed there as well. I did have a faith as a young boy but it wasn't very grounded and I wasn't surrounded by Christian community other than my mother. Consequently, when I went to boarding school at the age of 13 my interest in God wasn't an upfront issue in my life. It wasn't amongst the people I was moving with either. I didn't really think about it until when I was in my early 20s. By then, I had moved to California where I played in some bar bands for a few years. Ever since boarding school I had been on the slippery slope of dabbling in drugs. At 22 I found myself living next door to some Christian musicians who kept trying to be friends with me. After a while I gave in and was friendly back and over two or three months I realised that they had something special which I hadn't got and there was a 'real' side that I hadn't seen in people's lives before. I'd always noticed hypocrisy, but never real healing and real commitment like theirs before. And when I saw that, I started examining myself and realised I had got myself into a sticky spot with drugs and other aspects of my lifestyle. I tried to clean things up by my own effort and discovered I couldn't. It was at that point that I prayed, 'If you're real, I really need to know and I really need your help.' And he answered that prayer and turned everything around."

'Psalms' was inspired by a dream Terl had while on tour with lona last October. "On one of the trips I fell asleep in the van on the road. I was having this dream and in it I was standing with a group of about five or six drummers in a row. We were just pounding these drums and worshipping God to the song 'The Lord Reigns'. It was really exciting and there was a lot of smoke around too - it was powerful. In the dream the word 'psalm' kept coming into my mind. And when I woke up the dream was still quite vivid, especially the drumming part and The Lord Reigns'. I thought, 'I mustn't forget this; I'd love to get together with some other drummers and do something like this.' I made some notes, the word 'psalm' still kept coming up in my mind and I thought it would be great to do a record with some really unapologetic worship on it with the emphasis on rhythm and drumming."

Terl shared his idea with some other musicians including his band mates, all of whom were very supportive. "That was surprising," said Terl. "Ususally, when the drummer announces that he's going to make a solo record the other band members go, 'Oh no!'" The rest of the group all appear on the album, as do a number of Terl's other musician friends. These include Ben Okafor, saxophonist Mike Parlett, guitarist Peter Bonas, who co-wrote the track "Israel", Dave Clifton and guitarist Stuart Garrard, who ended up singing on "The Lord Reigns" and "Do No Fear", after Terl decided that the guide vocals he had done were so good there was no need to change them.

Going hand in hand with the album is some intensive research Terl has done about the significance of drumming in the Bible. "The research is relevant from the standpoint of encouragement," said Terl. "Although things are changing quite a lot now, since Victorian times there's been opposition to drums in church and to expressing yourself in a bigger, freer way, as drums motivate you to do. I thought that as a drummer I had a responsibility to find out a bit more, besides being frustrated that when I read the Bible I didn't see the word 'drum' in every other sentence! What I found was that in the NIV where you read the word 'tambourine', it's usually been translated from the Hebrew word 'tof'. Now, most drums have onomatopaeic names (ie, they are named after the sound they make) and the tof is a frame drum (one with a hollow shell supporting a skin). Basically, any modern drum could come under that heading. The idea of a tambourine conjures up pictures of a lightweight, percussive instrument and doesn't give a realistic picture of what the worship would have been like. If there were whole groups of people playing these drums, you can imagine that was a serious motivating and powerful rhythm that was going on."

Terl is quick to point out that despite this solo offering he is still very much a part of lona. The group, whose contract with Nelson Word ran out after the release of 'Beyond These Shores', are now signed to Alliance Music and are busy working on their next album, due for release in September. 'Psalms', Terl hopes, will be the first in a series of projects "drawing people from the family of Christian musicians to do different things in an unapologetic way." His aim is to offer an alternative to secular music. "A lot of Christian music is made with the church-going audience in mind," commented Terl. "I've nothing against that but what I felt I'd like to do is something that is outspoken, but bridges the gap a bit and to try and make something with a powerful quality about it."