One of Christendom's great drummers, Iona's TERL BRYANT has his second solo album out. He spoke to Tony Cummings. 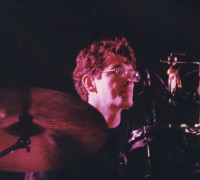 Since Cross Rhythms last spoke to him, it has been a monumentally productive couple of years for drummer and percussionist extraordinaire Terl Bryant. The band with whom he plays, Iona, have risen to make a Celtic music phenomenon wooed by Q magazine and enjoyed by a still-growing international CCM audience. Terl has established the Psalm Drummers meetings, which have done an immense amount to change the Church's perceptions of percussion as being an appropriate vehicle to praise God. Terl has found time to play sessions for such diverse talents as Maddy Pryor, the Kings Singers and Louise (yep, the ex-Eternal lass). And yet Terl has still found time to record his second solo album 'Beauty...As Far As The Eye Can See' which will be performed for the first time at Dudley's Roots And Branches Festival on Saturday, 13th September. Terl is particularly excited about the chance to play Roots And Branches.

"For various reasons I never really felt prompted to do live dates for the first album 'Psalm' much. It's going to be great doing Roots And Branches. Hopefully Mike Houghton (woodwinds), Phil Barker (bass), Charlie Groves (the worship leader at Holy Trinity Brompton) and the other people who made the recording of 'Beauty...As Far As The Eye Can See' will be able to join Juliet and me for the Roots And Branches performance."

Actress, vocalist and wife, Juliet Bryant, with Terl, played a pivotal role in the creation of 'Beauty...As Far As The Eye Can See'. Terl explains how the album evolved. "I'd been carrying a vision for some time about an album that would convey something of the beauty of the Lord. So many people are struggling with an authoritarian image of God. Knowing that music is such a powerful vehicle to change and enhance our concepts of things, I had this idea of conveying in music something of the beauty of God. I had begun talking to ICC about the possibility of doing my next album with them. Then my wife Juliet showed me a lyric she'd written called 'Beauty'. She had no idea of what I was thinking about the direction of the album. I took that as some kind of confirmation that the Lord was leading this project."

I asked Terl what method he'd used in composing the material for 'Beauty...'. "I set up my little four track at home, with a keyboard and a drum machine and noodled around. I'm a very poor pianist and guitarist but out of that time we got basic chord structures. Juliet had vocal melodies. And while all this was going on our children were making their demands! The demos for the album were very basic. But then, with the calibre of musicians I am privileged to call on it wouldn't have been right to dictate their parts. I'm not Marcus Miller. I just gave them something to bounce off and sure enough, when we got to ICC, it was electric."

Those high calibre musicians included Iona compatriots Dave Bainbridge and Troy Donockley as well as Charlie and Allie Graves from HTB. Five of the 12 tracks are instrumental. Possibly one of the most stunning tracks is the 13-minute plus closer "10 Drummers Drumming". Comments Terl, "It was entirely improvised and actually is typical of the kind of worship we get into with Psalm Drummers. I did it before I went into the studio; it was recorded at St Stephens Church, Twickenham. What really excites me about it is that it demonstrates that when genuine worship occurs we see Jesus turning water into wine. When we serve him with our playing he will enter into it."

The Psalm Drummers meetings hosted by Terl and percussionist/lawyer Phil Manning have proved a big success. Drummers and percussionists of all levels (from church worship groups to professional musicians) meet regularly to worship and the Psalm Drummers mailing list is 150 and growing. Says Terl, "Psalm Drummers has worked on a number of levels. It's helped dispel competitiveness, it's equipped drummers to deal with the criticism that because drums have been used in other religions and cultures in ungodly situations they can't be used in a Christian context, and it's freed many drummers up to worship the Lord with their instrument. It's thrilling when you can really sense the Lord in a large number of drummers playing together."

On the album there are several songs that Terl feels have the potential to touch people. "When we played it to people many were moved by the title track. It's a song of hope. There's so much change around us, so much uncertainty. There's a place of rest in Christ and I believe the music reflects that. Another song that brings pictures to my mind is 'In The Shadow Of Great Wings', again reflecting the security we can find under the wing of the Lord. Then for those who are maybe wrestling with their faith they'll find the slightly darker angle of 'Though I Walk', which is based on Psalm 23 will connect with them. There is a wide sweep of music on 'Beauty...'. Classical, Celtic, rock, even something with a bit of a dance groove. But I need to keep emphasising that Juliet and I didn't make 'Beauty...' for any commercial purpose. It's not a career move. We were prompted to do it as an offering of worship to the Lord. I think we've managed to capture that on tape."

For my final question I asked Terl whether he thought that offering of worship would be found in live performance. "Yes, I think so. I'm really looking forward to it. I'm still committed to Iona and I love playing with them - I'm in Germany with them next weekend - but sometimes I long for the freedom that real worship brings. With Iona their stuff is sequenced on the bigger pieces and it limits the freedom as to where a piece might go. I'm looking forward to playing music with the freedom to go where the Spirit takes us."