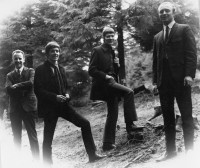 In today's world, the Christian music and gospel scene is awash with a vast array of acts ranging from arena-filling bands to solo bedroom recording artists who are able to declare their faith through their chosen brand of music. The relative ease of releasing songs via a number of different online platforms has removed the absolute need of getting a record deal and, thanks to the practice of singing Christian lyrics set to mainstream musical styles becoming widely accepted by the believing community, it could be argued that things have never been easier in this respect for the Christian musician.

Of course, it hasn't always been like this. Back in the early '60s in Britain, bringing drums and guitar into a sacred setting and mimicking the pop music sounds of the day was often frowned upon if not directly rejected by churches. Perhaps this attitude was fostered through a general dislike of the new music of the day by the previous generation or a misguided fear that playing such music - often classed as 'of the devil' - would somehow result in the listener conforming to the ways of the world. Nonetheless, a small number of UK Christian bands around that time persevered and arguably laid the foundations for the rich and thriving CCM scene that we enjoy today before disappearing, mostly forgotten, back into the mists of time.

Thought to be the only band of its kind at the time in Scotland, one such act was Renfrewshire-based four-piece the Concords. Formed in 1958 and with a line up consisting of lead vocalist Leslie Mitchell, Douglas Watt on lead guitar and Ian Ramsden and Gordon Webster on drums and bass respectively, the band cut their teeth by playing at church services, youth rallies and tea meetings across the West of Scotland which resulted in the building up of a sizeable following of young Christians who liked the sound of the Beatles, the Searchers and the Hollies but wanted to hear faith-related lyrics. By the mid-'60s, the Concords found themselves as the go-to band for churches seeking to put on large youth events and, during that period, the foursome appeared at renowned venues such as Edinburgh's Usher Hall, Glasgow's Kelvin Hall Arena and Belfast City Hall.

By 1966, such was the Concords' comparative success as a live act that they were invited to an EMI recording studio in Edinburgh to record 'Soul Purpose' - the first of two albums which, not unlike the approach the Beatles took five years earlier with their debut, was recorded live in one sitting with no overdubs. The following year, the group embarked on a more ambitious follow up with 'A Turn For The Better' continuing to feature songs written by all four members but with the addition of brass and string players from the Scottish National Orchestra to enhance the group's core sound. By the end of the decade, the group had also released a single featuring a cover of Curtis Mayfield's "People Get Ready" on the A side (with the Gordon Webster-penned "Me-God" on the flipside) whilst a subsequently unreleased, untitled and now lost third album - recorded after core members Leslie Mitchell and Ian Ramsden had left - signalled the end of the Concords' recording career. Following a number of personnel changes, the band called it a day in 1973 with each member going their separate ways.

I met up with the Concords' one-time rhythm section of Ian Ramsden and Gordon Webster. As we sat in the latter's apartment overlooking the River Clyde near to where it all began, we talked about those formative years of Britain's Christian music scene. "The Concords started in the Church Of The Nazarene in Paisley around about 1958," advised the group's drummer Ian Ramsden. "I was 13. Douglas must have been 15 and Leslie, the singer, was a year older. Douglas and Leslie were friends and they had already started playing guitar. I was the only other guy there so I got the drums. At that time and as a young person in the church, it seemed all doom and gloom and I felt that there was nothing about the real message of love and forgiveness through Christ and that's why we started the band - to communicate that message."

"I went to Renfrew Baptist Church and I had been at youth fellowship events at the Nazarene church," added Gordon. "Around 1960 when I was about 15, I was singing duets with a chap called Deans Buchanan and, at the end of one of the nights at the Nazarene, I was approached by the guys in the Concords and they asked me if I would like to join their group as their bass player was leaving. I told them I didn't play bass but they said they'd teach me. I said I'd think about it and then they invited me to come to one of their gigs in Paisley and I liked what I heard. The training I got for playing the bass was attending my first band practise on the Tuesday before playing in the Govan Town Hall on the Friday of the same week!"

With appearances at countless youth events, tea meetings and church services during their early years, it's clear that the Concords spent a lot of time honing their craft. Said Gordon, "We served our apprenticeship - we really did. We played in some of the most remote and difficult areas of Glasgow where the audience might have only numbered 10. We used to go to our gigs on the bus with an amp in one hand and a guitar in the other."

Ian added, "From a drummer's point of view, it was very difficult because you could be in a hall that was no bigger than a living room and you couldn't really hit the drums too loud. There was little chance of getting any flow going but it was good fun despite that. We were trying to go outside of the church to play to people who had never heard the message we were singing about before. We always thought that if they could latch onto a style of music that was familiar to them then they would be on our side and might be more receptive to what we were singing about."

"Originally, we were playing in churches all the time and were effectively preaching to the converted but that's not really what we wanted to do," explained Ian. "Latterly, we formed a parallel group called SKWEEZ and the idea of that was to try and get into pubs and clubs but still play the same music. It wasn't just about the music - it had to be a form of outreach."

Remembered Gordon, "One of the good spots at the time was St George's Tron CafÃ© in Glasgow and people would queue all the way down Bath Street because we happened to be playing there. It was wonderful that the young people would want to come into a church cafÃ© and hear music with Christian lyrics on a Saturday night. We used to invite girlfriends, colleagues and friends to our gigs and without exception no one ever said they thought we were dreadful. Instead, they would ask us where we were playing next and that was always an encouragement. We were never ashamed to be in the Concords playing gospel music, giving our testimonies or talking about the love of Jesus to people who we worked with in our day jobs. We were known for our Christian faith just as much as for our music."

The Concords also became known for writing their own faith-based material but this wasn't always the case as Ian pointed out. "At the very start, we didn't have our own material - it was all American gospel songs by Jim Reeves and folks like that. We did that for two or three years and then Douglas and I started writing our own songs. Douglas would get a tune and then he'd give it to me and I'd write some lyrics. We'd give it to the band on the Tuesday and by the Saturday night we'd be playing it. Gordon, Douglas and Leslie's harmonies really did the job and made our songs sound really good."

With a number of their own songs under their belt, the band set about recording their debut album 'Soul Purpose' in 1966. I asked Gordon how the opportunity came about. "We ended up doing a temporary recording in the seaman's mission in Glasgow and some guys who looked like the mafia came along and set up recording machines to see if we were any good. As a result of that, we progressed to recording the first album at EMI's Craighall Studio in Edinburgh for Christian music label Emblem Records. We did the album in one day without any overdubs and I don't think we had to repeat any songs when we were recording them because we knew them so well from our live gigs. When it came to going into a studio, we never saw it as a problem."

"The album was distributed through a company called Clyde Factors and you could go into Boots and places like that and buy it," Gordon added. "Plus Christian bookshops like Pickering & Inglis sold the album and we sold lots of copies at our concerts. It was certainly the top selling LP for Emblem Records - there's no doubt about that."

Whilst their record label was undoubtedly satisfied with the sales figures, I wondered what churchgoers thought of 'Soul Purpose'. Responded Gordon, "The reaction from church folks to the album was generally positive - especially from the Nazarene church where we were based. Within reason, we were very well supported and encouraged although there were occasions when certain denominations struggled with us. We would be getting drums and amps all lined up outside waiting for the church service to finish before going in to play at a youth fellowship and some of the people coming out wouldn't even look at us. However, we were playing and giving our testimonies in front of sometimes over 200 young folk and it was definitely the right place to be."

I grew up listening to the Concords LPs and could probably sing along with most of their songs. I remember watching the group at The Kelvin Hall in Glasgow when I was very young and thinking they were pop stars! My Uncle, Gordon Webster, played bass guitar but sang tenor, which, I imagine now, must have been be quite difficult!
So pleased that I've been able to download the two albums off the back of this interview!

Excellent interview,thank you. Gordon Webster is my Uncle and I am very proud of him as he has been given a great gift from God. So proud of what he has achieved-The Concords music was just wonderful!