The Psalms have long since been a source of inspiration for singers, musicians and songwriters throughout the ages thanks in part to the depth of feeling found within their words - many of which were written by King David millennia ago. These timeless lyrics of praise, love, frustration, faith, despair and wonder have winged their way across time with chanting medieval monks, Gaelic-speaking Free Church congregations and even Johann Sebastian Bach taking a stab at providing a musical backdrop to the largest book in the Bible. In more recent times, the likes of Scottish worship leader Ian White and America's Psalms Project collective have both put their music to many of the Psalms. Now members of a horn-driven funk band from Watford have recently become psalmists and have included four psalms on their debut album 'Soul Food', recently released by Plankton Records.

The band in question is the five piece Darn Funk Orchestra - formed back in 2006 in Cambridge as the brainchild of founder member, drummer and lead singer Jimmy Darn - and the group has seen itself gain a wealth of experience and a healthy following over the years on the back of corporate events, weddings, festivals and club gigs whilst an ever-changing line up and Darn's drive to offer up something fresh and unique has resulted in a style of music that is impossible to pigeonhole. Most definitely containing elements of funk, rock, jazz, soul and ska, the Darn Funk Orchestra initially set out playing cover versions before Darn-penned originals started to become staunch favourites amongst audience members on account of the inventiveness of each song's arrangement as well as the band's innate musicianship.

With 10 years of live experience under its collective belt, the Darn Funk Orchestra has finally got round to recording its very first album which contains 12 Darn originals including what the band's press release coins "funk psalms". I caught up with Jimmy Darn to ask him how he came about putting his own stamp on the psalms. "I did a little course at a Bible college in Bournemouth and one of the modules was on the psalms," he explains. "In order to get really good at it, I decided to try and memorise some of them. Then I found that the best way to memorise the psalms was to put them to music because you've then got them in your head which in turn allows you to meditate and reflect on them without having to have your Bible in front you. You can be sat under a tree or by a river or wherever contemplating God's word. Me and the guys in the band chatted about what kind of material we could do and we started doing arrangements for some of the psalms. I've actually done the first 25 psalms and four of them made it onto the album. We started to play some of them at our gigs - people would maybe be getting drunk, dancing their heads off and we would end up playing 'Psalm 1', for example. I was surprised how many people weren't put off by it. After the gig, people would come up to us and ask about what we'd just played and be really enthusiastic about it."

Jimmy filled me in with a bit of Orchestra history. "I'm originally from Cambridge and the Funk Orchestra was a project that started when I was working for the Cambridge and District Youth For Christ. Basically, we were trying to do a young adult's nightclub experience to reach out to non-university young adults. We did a big advertising campaign to local churches but we didn't find too many musicians who could play music that people could actually dance to so we ended up booking some professional musicians. Ever since that time, I've had a passion for trying to make music that is appropriate for using in different kinds of contexts."

Jimmy continues, "When I finished with Youth For Christ I started studying at a drum tech in London to get some professional drumming qualifications and then I came back to Cambridge where I managed to find some good musicians who shared the same passion as me. Because I was now a professional musician playing in lots of function bands, we started to get bookings from companies and for weddings and such like. It was great because we got to do our own material mixed in with your average jazz/funk covers. That's how the project existed for about four years. It wasn't anything that had many connections with church - it was more of a corporate thing." 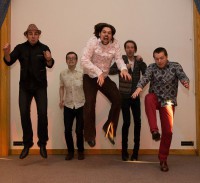 However, it wasn't long before the two worlds collided with Jimmy and the Orchestra blending familiar songs with his own material. "I was writing songs a long time before the Darn Funk Orchestra and, because I'm a Christian, Jesus and his kingdom is always something that I'm thinking about. I've always found it very hard not to write songs that talk about Jesus because he's always in my thoughts. So, after a while, we began to throw in some of my own songs into our live sets."

It's not long before we're back on the subject of the psalms and I ask Jimmy if he found it a daunting task reimagining those ancient texts. "Initially, it wasn't really about reinterpreting the psalms. It was more about getting something catchy enough for the words to stay in your head. In fact, that's what the ancient rabbis used to do - that's even what Jesus would have done - because, back then, that's how you would engage in Scripture. Folks wouldn't have been getting their Bible out all the time to read the 150 psalms, they had just recited them so many times that they had managed to memorise them. As I've started to take presenting the psalms more seriously, I've tried to come up with more musical ideas. For instance, we do 'Psalm 6' on the album and you can tell from the words that King David is basically having a nervous breakdown so I tried to write parts for a horn section that sounded just like that - a nervous breakdown. The psalms are so inspiring and it's a shame only to have them in a book and not in your head and music helps to get them in your head and keep them there."

Aside from the psalms, I press Jimmy to name his favourite track on the 'Soul Food' album. "For me, my favourite track is 'Up Here Down There'," he says without hesitation. "It's a song I wrote about 12 years ago and it's all about the connection between God who is out there in space and unfathomable because he's beyond the stars but who, if you search your own heart, is 'down there' in the furthest regions of your very being which can sometimes be just as hard a place to access as the stars. It's a weird concept but that song is probably the most personal one on the album. Musically, it's fun because it's in a strange time signature and I like the way the music represents the ethereal feeling of what I'm trying to convey."

Despite being the driving force behind the Darn Funk Orchestra in more ways than one, Jimmy is keen to give his fellow band members the recognition they deserve. "The band line up has chopped and changed since we began," he advises. "We've had quite a few horn players but one of our most loyal trumpet players is a guy called Chris Snead who I knew from my Cambridge days and he plays with the London City Big Band, has gigs in Dubai and is up there at the top in terms of musicianship so I'm honoured to have him involved with our little project. We've also got Ed Dampier on guitar - I like the fact that Ed isn't just your classic clean funk player but has some grit in his playing that comes from his love of the blues. I met Ed in London and he's been playing with us for about five years now. There are lots of other talented people on the album too."

With the new album to promote and a number of bookings over the summer, it looks certain to be a busy time for the Darn Funk Orchestra and Jimmy is clear about what he's trying to achieve. "I like to make music that stretches people's minds," he states. "God is a very creative God and he calls us to imitate him in so many ways in terms of creativity. We've got a God that created badgers and hedgehogs and funny reptile creatures - if you look at the earth and the world that God created, there are all sorts of weird and wonderful ways that he has expressed himself.

"So, if God expresses himself in those wacky ways," Jimmy adds in closing, "it only seems right to create some jazz, you know?"

Soul food is an album that I enjoy more every time I listen to it. I love the kind of music styles the band play around with and I always enjoy music that's played impressively well. I like music that's a real band effort and every member of the band gets to shine as well as being a super solid unit. The lyrics are quirky but also very deep. I can't help but get into an audit of worship to Jesus when singing along. Great great album

A scintillating, aurally exciting miasma of funk infused neo-liturgical nonchalance would be how I might describe the DFO. Exquisite album. Luscious live ambience accompanied by bursts of witty irony and unencumbered evangelistic soundbites. Definitely worth a listen.

It's so refreshing to have such a funktastic band who represent God. The album is mint! Love the track 'the way of the sluggard' very snarky puppy influenced. The Psalms are super good too...clever horn lines n nicely arranged.

Great review! Definitely worth checking out this album. I've followed the Darn Funk Orchestra for a while and love the passion and energy. What stands out about the album for me is how it bridges the gap between spiritual content of the lyrics, and fresh compositions that are inspired by a range of classic and contemporary music. At its worst, 'Christian' popular music can sound like a stale imitation of whatever is in the charts, but you can tell DFO have a real breadth and depth about what they listen to. There's also an adventurous and high level of muscianship in these performances. Would definitely recommend catching these guys live!