THE ELECTRICS are an accordion-pumping, foot-stomping, hard-rocking unit. Dave Massey checked them out. 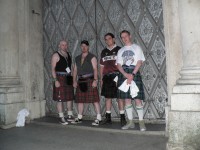 With the recent rise of popularity in the Celtic roots scene has come chart success for groups like the Waterboys and the Pogues and the 'finger in the ear' preconceptions most of us have about folk music have been all but blown away. Slogging away un-noticed by the English and with no ear-wax on their fingers for the last three years, Scottish roots band The Electrics are poised to blow away a few CCM cobwebs with their long awaited debut album 'Visions And Dreams'.

In Scotland The Electrics have become something of a Christian music institution. Touring extensively, their rootsy foot-stomping music has brought them a loyal and vociferous audience. The news of The Electrics' heady brew of folk-rock has at last spread to England and Glasgow's finest have played or are playing Harry, Cross Rhythms, and Greenbelt, while an extensive 'Visions And Dreams' tour is being lined up for October.

The band's origins really began with two of Glasgow's fondly remembered rock-gospel bands, Infra Penny and the Victors. Ex-lnfra Penny bassman and vocalist Sammy Horner teamed up for an impromptu session with hot rhythm-and-blues guitarist Paul Baird at the Impact Festival. Then ex-metal drummer Davey McArthur was persuaded to chuck out his extra kick drum and throw in his lot - and finally, after a session with the band, Alan Hewitt (keyboards, accordion and woodwind/ made up the present four-piece band. Armed with a six-track cassette album that sold like toothpaste at a dentist convention, The Electrics, as Sammy Horner remembers were soon very busy. "We found ourselves playing at things like students' Christmas do's and things like that - which was amazing, and one of our first gigs was in a hotel; in fact, it's the only time we've ever been put up in a hotel, 'cos as you know Christian artistes usually sleep on park benches... and we ended up playing a four-hour set at St Andrew's University - with only seven songs, so we played them a lot."

Prepared to play "any hole in the wall which would have us" The Electrics began to build up a loyal following. Another privately-produced cassette 'Views'n'Blues' followed in 1989. Belfast-born Sam explained how listening to bands like the Waterboys and Runrig began to point towards where the band's musical direction should be heading.

"It took time" remembers Sammy. "I'm a big country music fan - Paul was a rhythm-and-blues man and our drummer came from the heavy metal scene - whilst our keyboard player was into jazz. So the Electrics had a bit of an identity crisis! On the 'Views'n'Blues' tape there were ten or twelve songs - and they were all different styles but we always felt that Celtic music was what we should do but we weren't quite sure how to go about that, because like blues - unless you do something original with it, it all sounds the same. We all like the blend of folk and rock that 'The Waterboys' achieve, and being based in Scotland, Runrig are a big band but being an Irishman I can't understand a word they're saying." 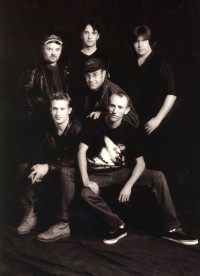 In 1990 at Scotland's Impact Festival, the band met up with Cross Rhythms' editor Tony Cummings. Tony has a very vivid impression of the band. "I heard some of the band's songs before - Split Level had been including "Mercy Mercy" in their live set for ages. But nothing had prepared me for The Electrics' live performance. They get an audience up and dancing like mad people. They were wonderful, so fresh and invigorating. But then they closed with this worship song called "Free". It was amazing. The Holy Spirit just fell on the audience. When the band left the stage the audience just stayed there singing and worshipping God. It was the most anointed time of rock music I'd ever experienced."

Tony Cummings was in the process of forming with ex-Nutshell manager Paul Bennett a new record label and management company Full Circle. Remembering his stunning experience at the Impact Festival, The Electrics were asked to sign to Full Circle and began recording at the Glasgow Music Studio. Stylistically the album takes in Irish reels, Cajun-style blues and pounding folk-rockers. Guesting on the album were a couple of consummate Christian folk-rockers, lona's hornman Dave Fitzgerald and Eden Burning's mandolin maestro Neill Forrest. But the bulk of the instrumentation was supplied by the band themselves with multi-instrumentalist Alan Hewitt playing eight different instruments! Producer Tony Cummings has skilfully caught a high-octane live band' sound on the accordion-pumping "The Turning Tide", the penny-whistle propelled Pogues-style stomper "Justify Your Love", or the riveting Cajun-blues reworking of Robert Johnson's "Hellhound On Your Trail". But standouts on the set are the full-tilt guitar rocker "2000 Years", the eerily haunting ballad "Mercy Mercy" and the triumphant praise chorus "Free", the latter two with the unexpected addition to the Celtic proceedings of a black gospel choir. Comments Sammy: "When we did overdubs in Walsall we brought in Tracey Riggan (another Full Circle artist whose solo album is released in September) and her vocal group Divine, to give us a real choir sound. We're over-the-moon with the results, we just hope the world's ready for Celtic rock black gospel." Lyrically, the band are wide-ranging in their material. The band's two songwriters, Sammy Horner and Alan Hewitt, move from direct celebrations of Christ's victory, "2000 Years" ("that's the greatest news I've heard in 2000 years") through to a searing indictment of the Gulf War "Some Things A Young Man Shouldn't Have Seen". But the lyrics are continually and avowedly up-front about Jesus. As a full time Christian worker with an 'establishment' youth and children's ministry, Sammy has no time for compromise.

"I know that there are two schools of thought about Christian music, but I feel that the best way to describe it is that coming up to Christmas time, all my kids think and talk about is Christmas - and basically you talk about and express what is in your heart - the kind of things that you get excited about."

The band are also not afraid to deal with tough issues, like in the Alan Hewitt song "Disciples Of Disaster", which castigates the kind of evangelistic mentality that has destroyed cultures and leaves a perverted idea of the gospel. Comments Sammy: "There's one example of a group of missionaries to a tribe in Africa and there was a huge revival amongst the people. The women happened to wear loin cloths and nothing up top - but when they became Christians the missionaries insisted that they should wear a covering on their heads.... so the women took off their loin cloths and wore them as hats!"

The Electrics do not see themselves as a 'hit and run' gospel band and alongside the message goes a depth of ministry being slightly re-defined through the Celtic roots music that is partly a vehicle for it. He has been working in schools and Youth Groups where Kylie and Jason have defined the musical boundaries - but is finding that the roots scene is more at home in the University and college circuits. The future as the band see it is entirely in the hands of God, both in terms of direction and ministry; but no doubt, with such a powerful album and a fast-filling date-sheet, things look good for this team of Celtic rockers