Veterans of music evangelism, THE LIBERATION SUITE from Texas, are still rocking hard after a staggering quarter century of gigging. Mike Rimmer reports on the ultimate Christian rock survivors. 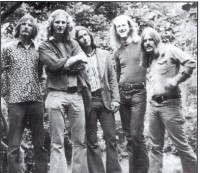 Liberation Suite recorded their first album a quarter of a century ago and it's recently been re-released in digital splendour to celebrate that landmark. The band were Christian music pioneers though hardly prolific since through numerous line-up changes and geographical moves they have only recorded three albums. Drummer Randy Hill is the keeper of the Lib Suite flame and he shrugs at the band's lack of output, "I wish there was an easy answer to that question! Let me just say that I am proud of what we have put out, and Lord willing, we will be able to release our next albums on a little more timely basis. Enough said."

Surprisingly for a Texan band, the origins of Lib Suite are in the UK. Randy clearly has some happy memories of his time over here. I wonder how the connection happened. Randy explains, "A fellow by the name of Ray Barnett had an organization called Friends In The West that worked with Christians behind, what was then known as, the Iron Curtain. Ray spoke at our church in San Marcos, Texas one Sunday evening in 1974, and we opened up the service with a couple of songs. After the service, we went to a local coffee shop with Ray. During our conversation over coffee, Ray said that he thought our music would go over well overseas, and more particularly, Ireland. He was originally from a suburb of Belfast, in Northern Ireland, and still had a house there. He said that if we could make it over there, we could use the house for our base. We had always felt that we would be ministering overseas at some point, and we told him we would definitely pray about it."

Over the next few weeks things started happening for the band as God provided money, a Dodge Maxi Van and it soon became clear that they were supposed to go to Northern Ireland. Newly married, Randy and the rest of the band arrived in Ireland in the spring of 1974. Hill remembers, "On the flight over, one of band members just happened to be sitting behind someone reading an Irish news-paper with a headline on the front page that read, "Bloody Friday." That was our first clue as to what we were getting ourselves into."

He continues, "When we arrived at Dublin, we were detained by airport officials who wanted to know why a bunch of Christians from Texas were moving to Northern Ireland during one of the worst times in the history of the 'war1. By the time they were done interrogating us, we had missed the last flight out to Belfast. The trains were detained as well, because of what was going on up north, and we were forced to find a place to stay in Dublin for a few days until the trains started running again. Two or three days later, we found ourselves standing in a bombed out train station in Belfast. We stood outside the station in the rain, waiting for our ride to show up, and watched as truckloads of British soldiers drove by, guns poised and ready to shoot. It was totally surreal, and all I could think was, 'What am I doing here?'" 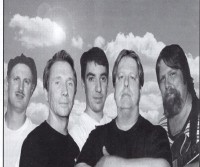 But the adventure was only just beginning! Randy explains, "The lady who was to come and pick us up was delayed because she was stopped by one of the local terrorist groups along the way. They were going to take her car and burn it until they found out she was a nurse; God was looking after us. We finally made it to our new home just outside Belfast, in a little village called Mallusk. Two weeks later, our van arrived in Manchester, England. We sent a couple of the band members over to pick it up, and when they opened the crate that the van was shipped over in, they found that it had been broken into. The back windows of the van were broken out, and a large amount of music equipment was gone. Nothing was insured, and the insurance guy at the dock said we could just kiss it goodbye. We knew God had other plans and told him that we would go back to Mallusk and pray, and that God was going to take care of it. Sure enough, the guy called us a week or so later and told us that a couple of guys were stopped for a traffic violation, and when the police opened up their trunk they found our equipment! He wanted us to come over and 'tell him about our God.' I think God was just using that situation to let us know we were right in the middle of his plans for us."

The band went to work and over the next six months they played everywhere they could including a number of open-air concerts. But it was an appearance at the first Greenbelt Festival in August 1974 that opened up the opportunity to record. "Ian Hamilton and Norman Miller of Word Records approached us after our performance and offered us a record deal on the new Myrrh label. We moved from Northern Ireland to London, in the fall of 1974, to begin recording the album."

The album was released the following year and the band played concerts throughout the British Isles and Europe for the next two years before returning to America. Those early days have meant that Lib Suite have a great deal of affection for the UK. Randy recalls, "We returned to tour Great Britain when our second album, 'Stride For Stride' was released in the early 1980s. We also did a tour of Ireland in 1991, after the release of our third album, 'Water And Blood'. We have every intention of touring Great Britain again in the near future."
As pioneers, Lib Suite's music was born out of an encounter with God. "Christian music started as a natural extension of our early commitment to Christ. We were already musicians, but our vision changed from wanting to be rock stars, into a desire to share the 'Good News' with others through our musical talents. The movement was quickly poisoned by Christian record labels, Christian music magazines, and media hype in general. Being a musician and being thrust into the limelight is a difficult position to be in anyway. Humans have this weird tendency to worship celebrity of any kind, and if you don't have your head screwed on you can get caught up in all the hype. There really doesn't seem to be much in the way of music evangelism anymore. It's either a bunch of preaching to the choir, so to speak, or bands are crossing over to the secular arena, and end up not saying much of anything at all. But, please, don't get me wrong; there is nothing wrong with Christian entertainment and nothing wrong with Christians crossing over and having secular hit songs. But there seems to be a real lack of good old fashioned musical evangelism out there."

So is Hill still as passionate about using music to reach people as he was in 1975? "Yes. I think music is one of the most effective tools that we have as Christians to reach the world. What else is there to evangelise with? TV preachers are pretty well scoffed at by non-Christians. People who aren't Christians see no need to go to church anymore. Music helps take the message straight to the heart."

As for the future, do Lib Suite have any new projects in the pipeline? "Glad you asked that one!" Randy responds, "Yes. We began recording some new material in October of 1999 that we hope to have finished by the end of this summer. The music is a little rockier and bluesier. I think people are going to really like the updated sound."