The Rev Jimmie Bratcher: A song-by-song rundown of his 'Secretly Famous' album

The Rev Jimmie Bratcher is no stranger to recording. In fact, his latest album 'Secretly Famous' is the seventh for the Kansas City-based preacher, evangelist and blues musician. 'Secretly Famous' was produced by multi-Grammy-winner Jim Gaines and recorded at his Bessie Blue Studio in Stantonville, Tennessee. Speaking about his latest Bratcher said, "This album is different for me because I went further back into my roots than on any of my other albums, back to a time before I became 'The Rev'. Back to the blues-rock root that I learned playing that old guitar." "That old guitar" Bratcher refers to is a classic white 1964 Gibson SG Jr, which he played on the new CD.

Backing Jimmie on 'Secretly Famous' are Craig Kew on bass, known for his work with the group Proto Kaw, which features guitarist Kerry Livgren from the legendary band Kansas; Lester Estelle Jr. on drums, a Nashville-based skin-slammer who's toured with Big And Rich and also co-owns Off The Wall Studios on Music Row; and keyboardist Rick Steff, a mainstay at Jim Gaines' recording sessions who's based in Memphis and also plays in the acclaimed band Lucero. Jimmie here gives a song-by-song rundown of his new album.

"Jupiter & Mars"
This song was my son Jason's idea. He sent me the idea and I was hooked on the first line: "Blinding light, flash of chrome, hot head blonde in a tricked out Ford". Say no more - this song had my attention.

"57"
I wanted to pay some respect to one of the most recorded microphones ever, the Shure SM57. So much a part of rock and roll history it is ridiculous. All of the guitars and vocals on this track were recorded on a Shure SM57.

"Feels Like Friday"
Every time I hear this song it makes me think of Spike Jones & The City Slickers or Louis Prima & Keeley Smith; it just has that '40s bebop thing happening. Every time Lester hits that side stick the song is just swinging. The music for this song happened pretty spontaneously. I have found that one of my most creative times is at the beginning of a sound check and that is how this song happened. We had just set up and I started playing the riff and everyone jumped on it. I quickly took out my phone, hit record and captured the moment. Then, one Tuesday morning a few weeks later, it just felt like Friday and that was that.

"It Just Feels Right"
In recording you never know just how a song will turn out till you hit the record button. This song started its life as a shuffle; it reminded me of "Leap Of Faith", the Delbert McClinton/Gary Nicholson song. But when I played it for Jim he said, "You can only have one shuffle on this record" and we already had "Check Your Blues At The Door". So, stressfully I started looking for ideas. Early one morning during tracking, I grabbed an acoustic, tuned it to drop D and the song poured out of my heart just the way you hear it on the album. Personally I feel it is a very important song. It's me telling my wife Sherri and the entire world that I will love her forever. There are few things that matter in life and marriage like love and the commitment to make it work no matter what. That can only be realized when we remove all other options from the table and give it all we've got.

"Check Your Blues At The Door"
You know there has to be a limit to trouble and hard times and for me it seems that too many times I end up bringing that stuff home with me. So this song is really me talking to myself, reminding myself to not bring that stuff home. 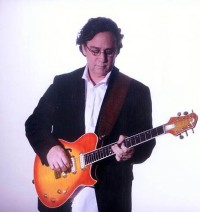 "Tobacco Road"
I have always loved this John D Loudermilk song since I first heard The Nashville Teens version. Recently I saw John on Marty Stewart's television show and John sat down with a nylon string guitar and played the song solo. It was stunning and I couldn't get it out of my mind. While on vacation in Southern California, the opening riff found me and I just couldn't get away from it. I loved the riff but didn't have a lyric idea and there came "Tobacco Road". I think the arrangement rocks; it captures the love/hate relationship between a young man and his town. I love to play this song live; as a power trio it kicks.

"Nowhere To Go But Down"
This song speaks about a time in my life when depression was my normal. I remember sitting talking with a friend who just happened to be a therapist when he said to me, "Do you know what depression is? Yes, well you have it." He was right; I did, so I started working my way back to health. One of the things that I needed to do was change my perspective. Change the way I was looking at things. It really doesn't matter if you're depressed or not; what matters is that you face it and get whatever help is necessary. For some of us it's just simply doing what the last phrase of the song says: "look up." Whatever it is for you to get help, depression is nothing to play with.

"When I Fall Apart"
I hate getting old! There, is that strong enough? One of the things I hate the most about getting old is the way some people try to make you feel, and this song is my statement of defiance for all those people. So, "watch me go up in flames as I fall apart!" Also this song is about that feeling each of us has that says, "If they really knew me they would never allow me in their club." I don't know about you but I think we all feel that way at one time or another and at some point we have to square our shoulders and say, "I am good enough and I don't care what anybody thinks."

"Never My Love"
I love the lyrics of this song, they are deep! It reaches into the soul of a relationship, into the depths and puts it on display for all to see. It speaks to my life. We tried to add other parts like keys and vocals, but it just seemed to take away from me telling my wife that I will be there for her and our family till the end. Sherri and I have for years had this confession we make to each other when times get rough. You know when it looks like it would be easier to quit than continue. One of us will just start saying, "There's no plan B, it's me and you all the way." This song speaks to that emotion like few things I have ever heard.

"I Can't Shake That Thing"
I love that I got to use my Gibson SG, Jr on this song; it's my favourite guitar and the first guitar I really played. Here's the story: one weekend my dad borrowed an electric guitar and amplifier and the effect on his then 12-year-old son was remarkable. I didn't leave the house at all that weekend and my dad hashed out a plan. In the driveway was a 1958 Desoto Firedome Hemi that no one ever drove. My dad ran an ad in The Kansas City Star newspaper, "Will trade 1958 Desoto for electric guitar and amplifier." We got a call and I came home with a White Gibson SG, Jr. and a Gibson Falcon amplifier that both I still have.

"Bologna Sandwich Man! "
Why write a song about bologna when I don't really eat bologna? We live in such an uptight world and I think sometimes we need to relax. I'm all about being healthy, but it's gotten way out of hand. Shoot, we can't even eat a bologna sandwich without feeling guilty. So this song is for all the uptight people who need to just take a break and chill out and have some fun.

"Starting All Over Again"
I've had my share of second chances. Many times we just need to clean the slate and start over. I am a thankful man today for everyone who has given me the honour of not holding my mistakes against me and allowing me to start over. If you get to pick a soundtrack for your life I think this one would be it. I've made a ton of mistakes and I have watched as my family and friends have allowed me to start all over again, and because of that I am a very rich man.